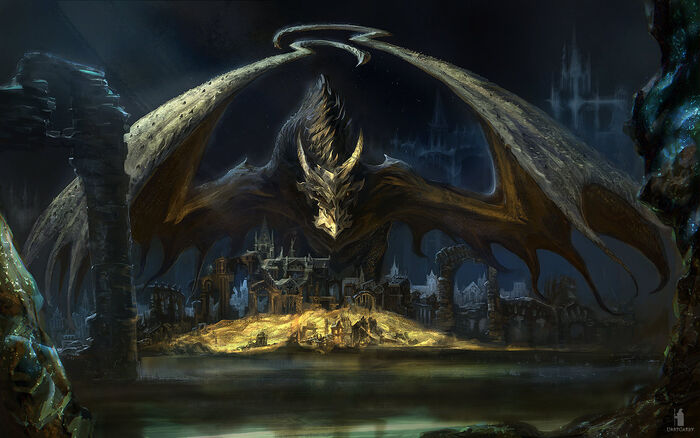 Zirgon is a Mage, Dragon, and the most powerful member of the Dragon Gods. He is the Solar Dragon, and thus uses Solar Dragon Slayer Magic. He has lived for hundreds of years, and is one of the targets of the famous 100 year quest. He was alive during the rise and fall of Dragons, and even witnessed the upcoming of Acnologia.

Zirgon is renowned around the world for being one of the most deadly and dangerous entities to ever walk the surface of the earth. When the guilds of Ishgar, and the Alverez empire began to wish to hunt the Dragon Gods, Zirgon welcomed the challenge. Zirgon was eager to face Dizkin, as he believed he could provide his first true challenge in centuries.

Zirgon holds varied opinions of his fellow Dragon Gods. He feels as tho Mercuphobia is a respectable dragon, but holds a somewhat negative view of Ignia, calling him a jealous pup, though he admits that he is bursting with power. Zirgon himself is feared by his fellow God Dragons, due to his immense power. The Dragon God Killress is the only one that serves him, and he is considered to be Zirgons "Bodyguard". While Zirgon himself disputed the need for a bodyguard, he sees the use in having a servant as powerful as Killress, who can handle opponents that Zirgon himself sees as below him.

Zirgon has 2 forms, his dragon form, and human form. In his dragon form, he is a huge dragon, far larger than even Acnologia was. He is a white dragon with blue threads on him. In human form, he is a dark skinned man standing at an impressive height. Within his Eclipse form, as a Dragon, he takes on a far darker appearance. His scales are dark black, and the blue threads that he once donned are now armor plates within his skin. As a human in this form, its almost seems that the eclipse energy gives him youth, as his white hair becomes black. Both of his eyes however are now pure white, giving him a divine appearance. He also seems far more sadistic in this form, and his solar flames become black as well.

Powers and Abilities: Superhuman Physical Characteristics, Enhanced Senses (Particularly Smell and Hearing), Dragon Slayer Magic (As one of the Dragon Gods, he is one of the most experienced wielders of Dragon Slayer Magic alive), Longevity (Has lived for several Centuries), Transformation (Can change between his human and Dragon form), Soul Absorption (Can bathe in the blood of other Dragons to gain more power), Large Size (Type 3), Energy Projection (In the form of many of his ranged attacks), Breathe Attack, Resistance to Magic. Flight, Earth Manipulation (His fights cause tremors that are felt worldwide), Fire Manipulation (As the Solar Dragon, Zirgon can manipulate and create Solar Flames, which are far hotter than the flames of Natsu Dragneel. Zirgon himself stated his flames dwarf even Igneel in temperature.), Statistics Amplification (Can gain strength and energy by absorbing solar energy), Absorption of Solar Energy (Passively gets stronger just by being in sunlight. The sunlight can give him strength, recover stamina, and recover magic energy), Force-Field Creation (Via using his Solar Manipulation), Weather Manipulation (Can cause Solar Flares to rain down from the sky), Hand-to-Hand Combatant, Healing (By absorbing Solar Energy, he can restore health), Resistance to Mind Reading.

Attack Potency: At least Small Country Level, likely Large Country Level (As one of the Dragon Gods, he has been described as comparable to Acnologia. He has stated that he has felt no true threat to himself for centuries, even describing the war with the NX Gods as pointless, implying he may be stronger than Radin. Should be well above the Twin Dragon Kings, as he told Dizkin that he had potential but isnt a match for him yet. His clash could be felt worldwide, causing tremors when he met fists with his opponent.) | At least Multi-Continent Level (After transforming, his magic power was felt world-wide. Completely overpowered the other God Dragons without effort. His magic power was stated to completely dwarf Acnologias own even at his strongest. Simply taking steps shattered the ground across the planet, and his fight with Dizkin (Which had a magic shield powered by several Dragon Slayers and even a God Dragon, in order to keep the damage contained in the small area) still caused the continent of Giltena to have earthquakes, destroying entire kingdoms.)

Striking Strength: At least Low Country Class, likely Large Country Class (Physically one of the strongest characters within the entirety of Serpents Klaw, stating he was stronger than Acnologia) | At least Multi-Continent Class (Simply taking steps shattered the ground across the planet, despite there being a magic shield around his fight with Dizkin for the soul purpose of keeping any damage contained in a small area.)

Range: Extended Melee Range, Ranged attacks can go Hundreds of meters to Several Kilometers. His fights can be felt worldwide due to the tremors it causes.

Intelligence: Extremely High (Has hundreds of years of experience in combat. One of the greatest combatants to ever live within his verse. Quite knowledgeable in many different cultures.)

Solar Dragon Slayer Magic (太陽のドラゴンマジック): Zirgon is adept with his Dragon Slayer Magic and makes use of it in many different ways in combat. As with all Dragon Slayers, he can consume his respective element, with the exception of that which he has created, to replenish his energy reserves, and deal more damage to Dragons and Slayers. The heat of his fire can increase in temperature, which is proportional to Zirgon's Solar Energy intake. He incorporates the flames he ignites into his fighting style, greatly increasing the damage of his blows. As such, Zirgon's Magic revolves around the usage of fire that can spout from any part of his body. Zirgon is able to ingest Solar energy, simply bathing in the sun gives him more strength as a fight goes on. His Solar Flames are extremely hot, being far hotter than regular Fire Dragon flames. He can even use his flames to create a propulsive effect The type of fire he uses can be changed. For example, can create it can be solidified to cling to surfaces. In addition, the sudden change in temperature caused by his rapid bursts of flame affects nearby air currents can manipulate air currents to an extent.