FC/OC VS Battles Wiki
Register
Don't have an account?
Sign In
Advertisement
in: Ovenverse, Characters, Male Characters,
and 30 more

Zentu is the king of all the Titans. He was once a being that existed alongside the Nexus of All Realities. He was deeply in love with Nexus, and together, they existed for millennia in peace. Nexus soon became pregnant however, and birthed the Titans. The Titans ruled and existed in Regular Space, doing as they pleased, and wreaking havoc upon existence. This caused the Eternals to grow upset, as Regular Space was under their authority. Thus Elphetite casted Zentu down upon Regular Space as punishment for his wrongdoings and commanded him to keep his children in check.

While he was infuriated at first, Zentu soon grew accustomed to living in Regular Space and watching over his children. While he still hopes of reuniting with his beloved Nexus, he takes no liberties when it comes to maintaining order within Regular Space. For Zentu knows that someday the Eternals will see the work he has done and return him back to his wife. Until then, he rules over the Titans with an iron fist.

Classification: Titan | Creation of the Eternals

Attack Potency: At least Multiverse Level+ (Zentu was stated to be the most powerful being in Regular Space before the existence of the Horsemen. This puts him well above his children, most of whom can destroy multiverses with ease. Nexus feared that if Zentu was not careful, he could destroy most, if not all of Regular Space.) | High Multiverse Level+ (Existed in the 5th dimensional barrier that separated Eternal Space from Regular Space. Should be equal to the Nexus of All Realities)

Speed: Massively FTL+ (Caught up with a casual Casem, who can move at Tree(3) times faster than the speed of light) | Immeasurable

Weaknesses: The Spear of Zentu. As it is made up of all his weaknesses, he is highly susceptible to the spear's damage and properties.

Spear of Zentu: Also known as Gungnir, the spear is made up of all of Zentu's weaknesses. By forcibly removing the aspects of himself that make him vulnerable, Zentu immensely boosted his resistance to a myriad of powers that could potentially kill him. The spear, being imbued with all of Zentu's weakness and vulnerability, has the ability to inflict weaknesses upon any opponent struck by it, even if they have resistances to said weaknesses. As an added bonus, the spear does the exact damage of the weakness inflicted, increasing its effectiveness. 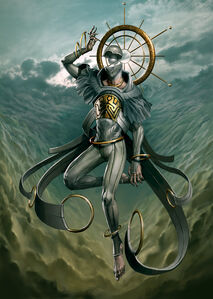 The Titan of all Titans
Community content is available under CC-BY-SA unless otherwise noted.
Advertisement