FC/OC VS Battles Wiki
Register
Don't have an account?
Sign In
Advertisement
in: Tier 2, Tier 2-C, Tier 2-A,
and 22 more 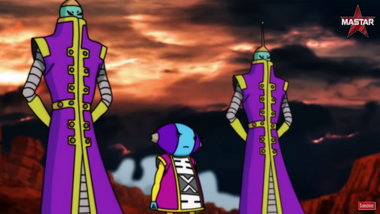 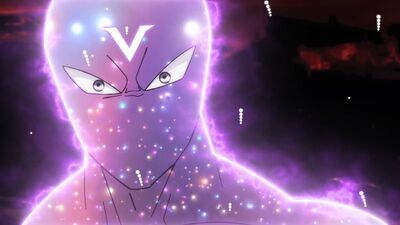 Zeno (全王, literally King of Kings) is the king of all of the twelve universes in the Dragon Ball multiverse. Although child-like in appearance and personality, his power is feared by even the Angels and the Gods of Destruction, having destroyed six of the original eighteen universes in a fit of anger.

Zeno appears in the end of Episode 11 and Episode 12 of Anime War, where he and his two attendants fused to reveal his "True Form"

Powers and Abilities: Superhuman Physical Characteristics, Longevity, Enhanced Senses, Spaceflight, Self-Sustenance (Type 1), Afterimage Creation, Chi Manipulation (Can be used defensively and offensively, to strengthen his skin or to fire ki blasts, which can home in on targets, and form defensive barriers), Ki/Energy Sensing, Spatial Manipulation (His hands materialized in the universe to flick planets against each other), Existence Erasure (Can erase people, objects and entire universes by raising his hand), Creation (Created a button out of nowhere), Possibly Sound Manipulation and Portal Creation (Any character equal to or stronger than Buu Saga top tiers can perform the Vice Shout with sheer power), Extrasensory Perception (Cannot be sensed by beings lesser than a "God"), Resistance to Extreme Cold and Cosmic Radiations | same as before, Instinctive Reaction, Spatial Manipulation (Can control space with a flick of a wrist and made the other planets in the solar system move in the path of Archon being sent flying), Non-Corporeal (Zeno's true form is a pure mass of energy and his guards are just an extension of himself), Martial Arts Mastery

Attack Potency: At least Low Multiverse level (He must be comparable to his canonical counterpart), possibly Higher (his guards are just extensions of himself, with each being comparable to Archon) | Multiverse level+ (Zen'Oh is powerful enough to battle head-to-head with Archon, the fusion of Zarama Omni-King with the other Dark Gods, with only Zarama being more powerful than the Daishinkan who was preventing the Multiverse's destruction. Furthermore, Archon was able to shake the Multiverse itself and spread its dark aura throughout the Multiverse, which consists of infinitely parallel dimensions. Having no limiters, he should be comparable in raw power to King Archon)

Lifting Strength: Unknown physically. At least Class Y with spatial manipulation (Effortlessly pushed planets around for a simple game), likely Pre-Stellar (Moved all the planets in the Solar System at great speeds with a gesture)