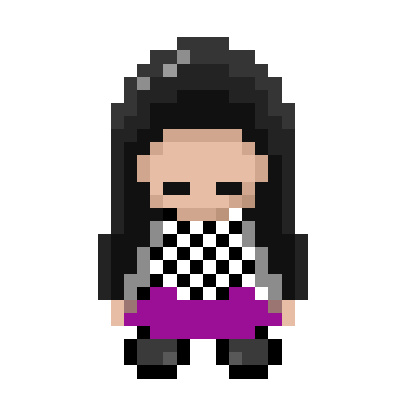 Yorutsuki is the main protagonist of Nihil. She is a young woman stuck in a desolated facility. She is locked up in her room, leaving her to explore her own dreams. In her dreams, the player gets to explore her view of the world around her and potentially figure out the reasons behind her situation.

Powers and Abilities: Immortality (Type 9. All of the Dream World is merely her dreams, and she will always come back from her "Real World" self if she is killed. Her death would also destroy the Dream World until she comes back), Void Manipulation (Via Waking Up) | Same as before, plus Transformation, Shapeshifting, Self-Sustenance (Type 1), Absorption (Can absorb beings into her dreamcatcher, killing them), Time Stop (Can freeze time with Wings effect), Invisibility (Can become invisible through the Monochrome effect), Regeneration (Low-High), Body Control, Statistics Reduction (Can reduce an enemy's speed, as well as their general stats), Teleportation (Can teleport back to the Nexus or to a pre-set location through the Hole effect), Weather Manipulation (Can summon rain over the entire dream world), Water Manipulation, Fire Manipulation, Status Effect Inducement (Can burn the enemy), Healing, Gravity Manipulation (Can increase gravity to the point of attracting planets), Curse Manipulation (Can curse the enemy with lowered stats), Sound Manipulation (Can produce sound loud enough to hurt enemies), Mind Manipulation (Can confuse enemies), Duplication (Can create an endless amount of jester clones), Intangibility (Can make her jester clones intangible at will), Flight, possibly Abstract Existence (Type 1. It is implied that the Abstract effect is an abstraction), Portal Creation (Can create portals to other parts of the dream world), Power Nullification (Can nullify an enemies' attempts to attack temporarily through the Abstract effect or permanently through the FORBIDDEN effect), Cosmic Awareness (Can automatically know the location of enemies or special items in the area), Immortality (Types 2 and 3) | Same as before, plus Superhuman Physical Characteristics

Standard Equipment: None | Her 22 effects

Standard Tactics: Unknown, although she mainly uses Dreamcatcher or Reaper to kill enemies.

Weaknesses: She lacks an arm | None notable

-Can pull the Earth towards the moon

-Effects: Yorutsuki can equip any of the following "Effect", changing her appearance and giving her new abilities based on the effect in question. She can only equip a single effect at a time.

Retrieved from "https://fcoc-vs-battles.fandom.com/wiki/Yorutsuki?oldid=246392"
Community content is available under CC-BY-SA unless otherwise noted.