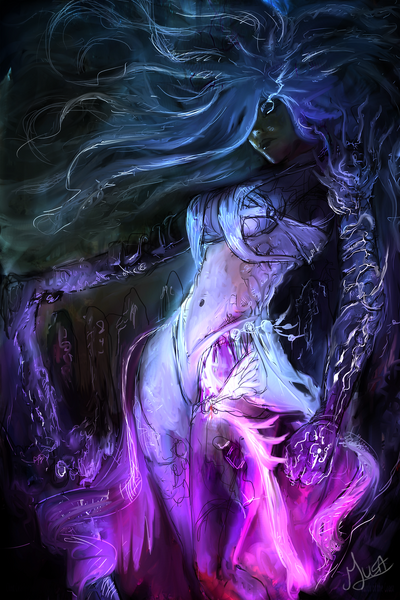 Xes was formerly the Titan of Joy, Sunshine, and Goodness. Currently, she is the Titan of Lust, Childbirth, and Pleasure. She, along with her other siblings, were birthed into Regular space by The Nexus of All Realities. Xes is the 1st sibling of the original 10 Titans.

In the beginning, Xes was the Titan of Joy, Sunshine, and Goodness. As the firstborn to Nexus and Zentu, she had a very high sense of morality and justice. It was because of this morality and justice, that Xes' siblings resented her. Xes had always prevented her siblings from causing chaos and destruction as they pleased, and thus, she became the target of a very malicious plan.

Xes' siblings, Dos, Vox and Bamf, called upon the power of Luxzes to corrupt Xes. The Patron Eternal of Lust, Passion, and Debauchery, granted Bamf her blessings, and with his newfound power, Bamf charmed and impregnated Xes. This resulted in Xes becoming corrupted as well, and transformed her into her current state. She singlehandedly gave birth to hundreds of new Titans, each more powerful and horrid than the last. She was finally stopped by her fallen father, Zentu. Zentu slain his grandchildren, leaving no more than 50 alive. He then sealed his once pure daughter in an isolated multiverse, where she continues to give birth to more and more Titans.

Legend says that Xes lays dormant, giving birth to an army of monsters... Waiting for the day when the seal will be broken and the chance to get revenge on her father for imprisoning her.

Name: Xes, 'She that can do no wrong' | 'Corrupted One', 'the Lost Daughter', Venus, Aphrodite

Classification: Titan of Joy, Sunshine, and Goodness | Titan of Lust, Childbirth, and Pleasure