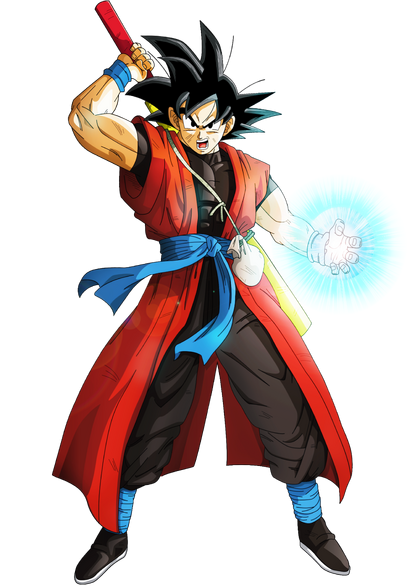 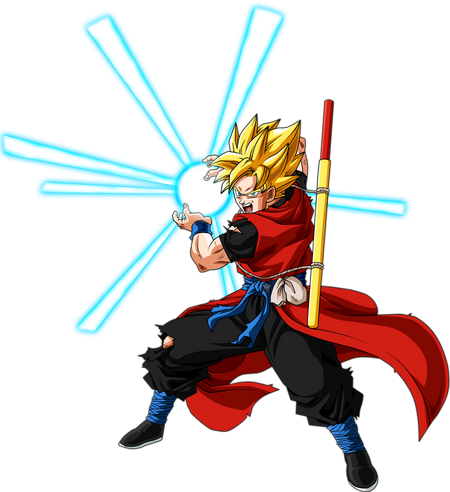 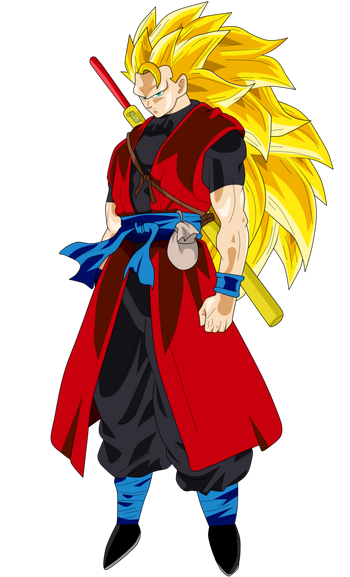 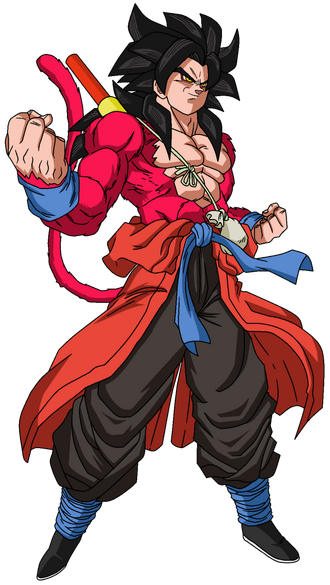 Xeno Goku of the Genesis Continuity is one of the most powerful Gokus spawned in the natural Multiverse. Following the Archetype generated by the GT Timeline, Xeno Goku was ripped out of the natural order of his own Timeline through outside sources desiring his immense strength. At first being protected by the Time Patrollers, Xeno Goku's own powers swiftly outgrew his protectors and assailants, if he was ever their lesser at all. His strength was such that he did not require Gogeta to defeat his Omega Shenron and the Time Breakers that were sent to capture him swiftly defeated even when powered by Dark Magics.

Xeno Goku was also noted to be at least aware of the general Multiverse surrounding him even if he wasn't privy to its complete inner workings, displaying his sheer command over Ki itself that he is able to detect the innumerable life signs in other Timelines. This command over Ki, as well as his own Ki being a glowing signal amongst all the other signals in the Multiverse, made him a desirable target that he was attacked over.

Once becoming the Time Patrol's Ace his light only grew to the point that he could no longer be a target, for targeting him would be far too dangerous. His adventures would lead to him having many experiences proving to far increase his strength, experiencing Godly Ki, and even unlocking Ultra Instinct. Later, like everybody in the Genesis Continuity, once Xeno Goku became aware of the Higher Dimension who saw them as mere fiction, they were able to link themselves to the higher reality and gain their card abilities as their own and further enhancing their abilities within the real world.

Classification: Ace of the Time Patrol, The Divine Saiyan, Hero of Time

Martial Arts, Self-Sustenance (Type 1), Immortality (Type 1), Supernatural Willpower, Superhuman Physical Characteristics, Pressure Points, Regeneration (Mid), Chi Manipulation and Life Manipulation, Extrasensory Perception, Enhanced Senses (Even without Ki Sensing, he has senses sharper than any known natural animal), Cosmic Awareness, Flight, Stealth Mastery, Duplication, Enhanced Zenkai (Quadrupled in power with only a few exchanges of fists), Afterimage Creation, Power Mimicry (Can replicate most energy-based attacks with Ki), Absorption (Can absorb most forms of energy to restore stamina and health. Can absorb Life Energy out of targets), Light Manipulation (Via Solar Flare and Light Slash), Social Influencing, Healing (Can heal others as long as a couple of cells are alive. Carries Senzu Beans with him), Information Analysis (Able to get a general grasp of all his enemies' attacks via a "6th Sense"), Durability Negation (Via multiple abilities), Precognition, Telepathy, Teleportation (Via Advanced Instant Transmission), Spatial Manipulation (Able to bend all of Space to his will via Godly Ki due to training from Whis. Has shown to be able to create his own Pocket Dimension of his own desires down to the Quantum Level), Kinetic Energy Manipulation and Deconstruction via Atomic Vision, Time Manipulation (Is able to Stop, Slow and Accelerate Time), Danmaku, Summoning (Is able to call upon multiple entities regardless of Time or Place, including both Shenron and Super Shenron as well as Chronoa), Transformation and Statistics Amplification (Via transformations and Kaioken), Sealing via Divine Mafuuba, Information Manipulation via various techniques, Existence Erasure and Immortality Type-9 Negation via Hakai, Cannot be sensed by beings lesser than a God, Portal Creation (Is able to rip holes in Space-Time and the walls of Dimensions), Probability Manipulation via Charge Impact, Time Travel, Technical Resurrection (Even when dead, Goku is allowed to freely move between Realities so he can continue fighting even when dead), Acausality (Type 2), Non-Physical Interaction, Reactive Evolution as a Super Saiyan 4, Power Nullification (Through Many means), Significantly more with SPECIAL Ability and Ability Cards

Resistance to Life Manipulation and Chi Manipulation (As Goku has mastered Control over his own Ki, it would require a being even stronger and more masterful to manipulate it to any extent), Reality Warping and Law Manipulation, (Janemba's Reality Howl was focused into an attack on Xeno Goku, who was able to counter it through an unknown technique), Existence Erasure (Demigra's Distortion Lightning does not work on Xeno Goku), Mind Manipulation and Possession (One of the few that went unaffected by Demigra's Multiversal Mind Scatter; Tanked Demigra's mind manipulation directed at him as well as Magical Possession), Soul Manipulation (Fu attempted to harvest his Soul trying to kill it or pull it out and manipulate it to no avail. Shroom's Scythe which would normally destroy souls upon contact does nothing to Goku. Jiren's Power Creep which allows him to destroy the soul through sheer Spiritual Force could not kill Goku in this way. King Yemma who has absolute authority over Souls does not have jurisdiction on Goku's soul), Magic and Curse Manipulation (Goku's Godly Ki is unique in the fact that it passively nullifies abnormal energies such as Magic and therefore curses), Time Manipulation (One of the few to be unaffected the erasure of the Concept of Time. As strong as Demon Gods who can resist a Time Stop over the Magniverse by Chronoa), Death Manipulation (Was able to stand in the presence and even combat the manifestation of the Concept of Death), Spatial Manipulation (Shattered and destroyed attacks that'd normally shift space around it to always it hits mark and negate durability outright. Jiren's Spatial Manipulation which shatters opponents did not do so to Goku. Able to temporarily grab and break Demigra's Spatial Shackles), Physics Manipulation and Madness Manipulation (Type 2) and Corruption (Demigra's residual energy which corrupts the natural physics of Universes and causes normal beings to go insane and/or become slaves garners does not work on Xeno Goku outright), Matter Manipulation (Demigra's Spatial Shackles which would "unmake" one's physical composition in its entirety failed to do anything of note and Yamcha's Quantum Attacks are explicitly noted to not work on people such as Xeno Goku), Causality Manipulation (Fought and was damaged by Janemba multiple times and was able to undo and counter Reverberation and Re-Destruction), Transmutation (Can block Demigra's Petrifying Saliva without a Ki Barrier. Demigra, who converted Chronoa into a ring in the past, could not do the same to Goku), Power Nullification (Demigra's Ki Disruption which is known to "turn off" other people's Ki proved to barely hinder Xeno Goku, if at all), Biological Manipulation and Poison Manipulation (Is one of the few people who has built a tolerance to poisons and biological agents to such an extent that they can drink the black waters of the Demon Realm, which houses almost every known toxin, poison, and hostile viral/bacterial agent of both physical and spiritual natures. Demigra's Corruptive Toxins do not work on Goku)

Resistance to Reality Warping (Capable of a level of strength that allows Goku to go uncountered even by TokiToki's Egg), Conceptual Manipulation and Fate Manipulation and Law Manipulation and Order Manipulation and Subjective Reality (Demigra with Toki Toki's egg who had control over all of the fundamental forms which found Reality had to resort to trying to defeat Goku with brute force), Power Nullification (Best resisted Beerus' Judgemental Force out of any Time Patroller. Fuu's attempts at nullifying Goku's power resulted in Goku's Ki backlashing against his machine and destroying it despite Fuu's machine was noted to be superior to Demigra's Corruptive Ki), Space-Time Manipulation and Durability Negation (Caught and easily smashed through Time Breaker Goku Black's Aura Slide which can slice open Space and Time. The disruption of Space-Time caused by Paradoxes and Time Breakers does not yield any effect), Absorption (Was able to produce a countermeasure to resist Demigra's Godly Assimilation in response to him absorbing TokiToki)

Lifting Strength: At least Immeasurable (Strong enough to resist Demigra's Telekinesis, which can grab and use Timelines as weapons and wrestle Fu, who's able to hold Worlds like marbles)

Stamina: Godly (Is able to take the strain of Super Saiyan with Kaioken times 10 Million and still not need to worry about any draining issues for an indefinite duration), Significantly higher Post-Time Skip

Intelligence: Extraordinary Genius (Over only one night of actual studying, was able to follow Xeno Bulma's formulas and scientific talk despite it involving extreme Quantum, Temporal and Astral Physics; Fields of science extremely difficult even for the smartest of the Kais to learn. Cited as one of the most skilled Gokus in the entire Infinite Magniverse and the most adaptable amongst them)

Notable Attacks/Techniques: As Goku has a huge amount of techniques, only the important ones will be cited.

Abilities which has been learned/gained through Xeno Goku's own Interactions with Beat's Reality, absorbing the effects from the cards of himself.

Powerful Ability Cards gained from Beat's World. Differs from normal Ability Cards and Abilities in that it (usually) resists negation of its effects.