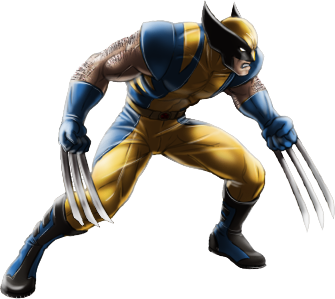 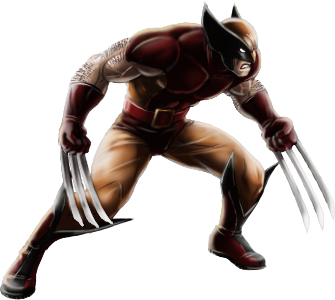 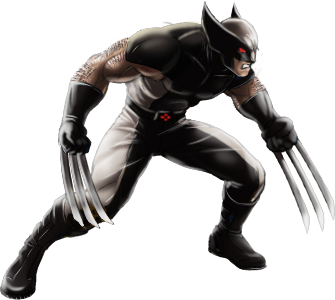 Born in 19th century Canada, James 'Logan' Howlett was a frail child. His mutant abilities did not manifest themselves until adolescence, after which he became a drifter and soldier. He drew the attention of several shadowy black-ops organizations, and suffered experimental procedures that bonded Adamantium to his skeleton and claws. Now a committed member of the X-Men, Wolverine carries a mortal grudge against Victor Creed, better known as Sabretooth. Official Bio

Powers and Abilities: Superhuman Physical Characteristics, Berserker Rage, Expert in Martial Arts, Healing Factor (High-Low instantly, Mid over time), Longevity, Immortality (Type 3), Resurrection (Only once per combat), Great sense of smell (Also, when Wolverine engages in melee combat, he applies a unique scent onto the opponent allowing him to find them), Attacks prevent healing and friendly buffs, Can apply serious wounds that cause huge amounts of bleeding and increase the overall damage of said bleeding, Attacks do extra damage to characters that are bleeding, Stealth Mastery, Can tenderize foes causing melee attacks to do more damage, Capable of easily stunning enemies, Resistance against Poison Manipulation and piercing attacks, Statistics Amplification with Iso-8. | Same abilities as his classic form plus increased speed and stamina whilst in berserk mode | Same abilities as his classic form plus a chance to prevent any fatal damage to any X-Force allies.

Intelligence: Gifted. Master of many martial arts as well as being a well renowned assassin (Also familiar with many cultures and foreign languages). Has decades of experience of fighting in wars and against super powered enemies. His stay at Madripoor as allowed him to remember its streets very well.

Weaknesses: Magnetic attacks as his bones are made of metal

Note: I will be comparing Wolverine to his 616 counterpart, so I'm giving credit since I will be taking some content from his page from here and here.