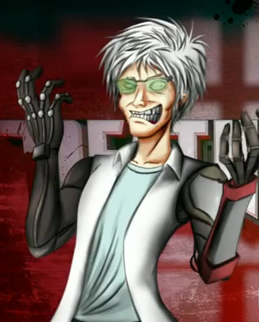 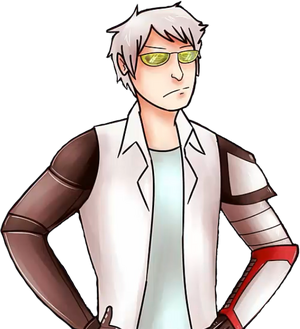 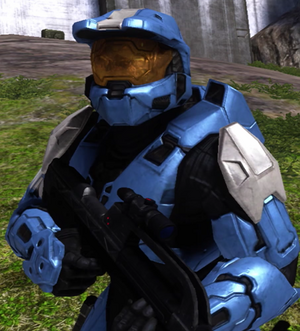 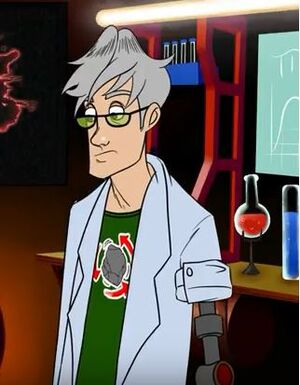 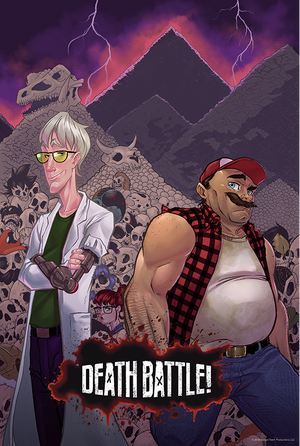 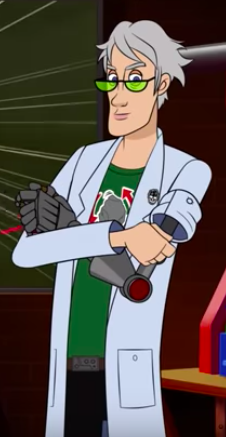 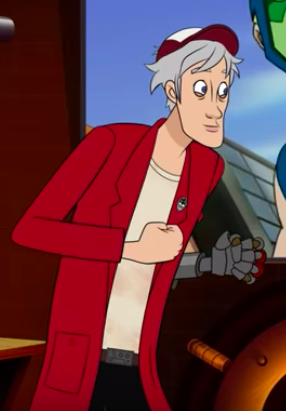 Wizard, otherwise known as Wiz, is a mad scientist who had built a reputation for his intellectual accomplishments. Eventually this reputation lead to his being hired by Screwattack to host Death Battle. Alongside his co-host, Boomstick, Wiz has analyzed hundreds of characters to see who would win a Death Battle.

While he is fairly unimpressive by himself, with preparation, or just his robotic arm, he can develop tons of new powers or create new minions.

It is confirmed that the final episode of Death Battle will be a battle between Wizard and Boomstick.

Note: This profile does take all appearances of Wizard into account, including Death Battle's previews which have questionable canonicity

Tier: Likely 10-B, At least 9-B with Robotic Arm | Unknown with Mechas, At least 9-C with man-eating plants, Unknown with Bacteria, 8-A to at least 7-C with explosives, Likely Low 7-B with Devil Gene | 8-B with Mjolnir Armor, Ranges from 9-C to 4-A with weaponry

Superhuman Strength with Robotic Arm, Immortality (Type 4; Has an unknown number of clones which simply replace him after dying), Cyborgization (Has a mechanical arm and mechanical implants in his brain), Multiple Personalities (Was possessed by K.I.T.T. during Death Race), Enhanced Senses (Like Boomstick, should be able to see ghosts), Martial Arts (Has shown proficiency in WWE-style wrestling), Illusion Manipulation, Soul Manipulation and Non-Corporeal (Can separate his spirit from his body when knocked unconscious), Fire Manipulation, Ice Manipulation and Flash Freeze (Can emit elements from his robotic arm), Transformation (His robotic arm can eject weapons, such as a buzzsaw), Inconsistent Resistance to Pain Manipulation (Was hardly fazed when his human arm was torn off by Boomstick during the Goro preview, but has been brought to tears by lesser strikes as well as when his arm was cut off by Homelander), Dimensional Travel (Somehow travels to Hell each weekend to host the battle arenas)

Immunity to Poison (Performed several genetic tests on rats, which lead to the creation of his pet Ratsputin, who is immune to poisons), Biological Manipulation (Grew man-eating plants, Has created bacteria deadlier than Boomstick), Statistics Amplification via Tachyon (Created a Tachyon table saw), Has attempted Necromancy on several occasions (Boomstick said Wiz' attempts never go well, but what goes wrong is unknown), minor Soul Manipulation (Can create soul contracts that are activated by signing it in blood, Both Boomstick and DUMMI have signed one of these contracts), Cyber-Necromancy (Used in one of his many attempts to resurrect his father, though it went wrong, Used to create the Cyber-Goose), All powers of the Devil Gene (Wiz has in the past successfully created a gummy that gives the consumer all powers of the Devil Gene, and he would have likely consumed it himself, but Boomstick's dog Jack Spaniels ate it while it was unsupervised), Light Manipulation (Performed an experiment which resulted in him throwing up lasers and could have easily done it a second time for Boomstick), Size Manipulation (His attempt at a de-aging serum instead shrunk Boomstick's head), Matter Manipulation and Transmutation with Remote Control (Reversed the effects of the Gold Flower), Matter Manipulation with Tesseract Gun, Dimensional Travel via Multiverse Manipulator (Was built to peer into alternate timelines, Temporarily sent Wiz and Boomstick into an alternate universe where they were put into the bodies of their alternate selves, even after the device was destroyed), Time Manipulation via (Built a Time Machine which finally worked, but then failed again in Link's 2021 preview, in which it slowed time for Boomstick), Ki Manipulation (Possesses bottles of contained Ki, God Ki, and Destruction Energy), Black Hole Manipulation via Black Hole Generator, Forcefield Creation and Spatial Manipulation via Dimensional Forcefield (Turned Boomstick 2D on contact), Cosmic Kinetic Energy Manipulation (Contained and laced Boomstick's beer with cosmic kinetic energy which turned him into a Speed God) and should possess all the same powers should he drink it), Sound Manipulation (Has a amp speaker which can tune an electric guitar to a frequency capable of causing ear bleeding and knocking Boomstick unconscious), Delayed Teleportation via Blue Team's Teleporter, Teleportation via Handheld Teleporter (Swapped his and Ringmaster's places), Mecha-Geese has Cyborgization (Is scrap metal built around the skeleton of a goose), Energy Projection and Electricity Manipulation (It's left head can fire blasts of energy while it's right head can fire bolts of electricity), and likely Flight

Attack Potency: Likely Average Human Level, Wall Level with Robotic Arm (Can harm, daze, and render Boomstick unconscious), Small Building level via elemental powers (Could freeze Boomstick) | Unknown with Mechas (What weapons they have and what they're capable of is unknown), At least Street Level with man-eating plants, Unknown with Bacteria (Is deadlier than Boomstick), Multi-City Block level to at least Town level+ with explosives (Used 200 tons of TNT to blow up Boomstick's alcohol, Performed some kind of experiment which was supposedly powerful enough to vaporize the entire building he and Boomstick were in), Likely Small City Level with Devil Gene (Would likely compare to Devil Gene users like Kazuya Mishima), Cyber-Goose is Unknown (Shut off the power to the entire building, which is of unknown size), Unknown via Multiversal Manipulator (When the device was smashed, the universe momentarily glitched, even later affecting the universes originally affected) | City Block Level with Mjolnir Armor (Should be comparable to Red vs Blue characters), Ranges from Street Level to Multi-Solar System Level with weaponry (The Battle Rifle is Street Level, while the Flowers, if comparable to the enemies Mario defeats with them, should be around Large Star Level)

Lifting Strength: At least Athletic Human (Can lift other humans overhead and throw them around with ease) | Unknown with Mjolnir Armor (Lifting Strength in Red vs Blue ranges from Peak Human to Class 100)

Durability: At least Street Level (Constantly survives hits from Boomstick, Withstood his arm being cut off by a Tachyon table saw, Survived being shot by a potato gun, though he was knocked out for a month) | Unknown with Mechas, Likely Small City Level with Devil Gene | City Block Level with Mjolnir Armor, Solar System level with Booster Gold forcefields, At least Universal Level with Technic Chair Forcefields, likely far higher (The shields created through the Techno-Mystical Chair could survive blows from incredibly powerful foes, including Well-Fed Galactus)

Intelligence: Genius (Has shown to be quite the intellectual, Has created countless cybernetic objects, as well as sentient robots, Created a Tachyon table saw, Has created a retro-aging serum, Created his own version of Tekken's Devil Gene in a gummy digestible, Has performed an experiment which resulted in him throwing up lasers, Has tried on several occasions to create time travel devices, In canon likely played a role in the creation of the Death Battle T-Shirt, Has attempted Necromancy on several occasions, Utilized Cyber-Necromancy to create Cyber-Goose, Reversed Boomstick's post-Omnitrix-abuse transformation into a genetic abomination, Reattached his arm after it was cut off by Homelander, Likely helped trick Jesus into coming down to Hell to fight Charles Darwin in Hell's battle arenas, Created Ringmaster's floating platforms)

Weaknesses: Extremely egotistical, Has shown on many occasions to be quite fragile (Such as when he broke his arm falling out of a chair or when he fell unconscious after tripping when Boomstick tied his shoelaces together), His robotic arm suffers constant glitches, Could never cook due to overthinking the ingredients and prior organization, Possibly has syphilis

Key: Base | Experiments | With Borrowed Weaponry