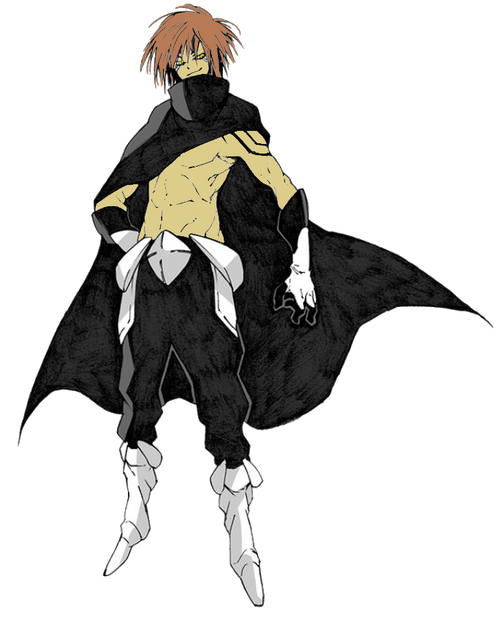 Whyr Nauth is a character in Everybody Wants to Rule the World who was brought to another universe by Mr. Omni. His origins were unknown at first, but through his flashbacks it has been revealed that he lost his memory at some point in time and that he used to live in Equilibrium together with his sisters. Equilibrium was destroyed and his sisters, Ilia and Liszia, were killed. It's one of his goals to make a place where all inhabitants of earth can live together in harmony just like they did in Equilibrium. At first his methods of achieving this were quite brutal, but he changed his ways and even befriended many of the other figures that were summoned by Omni. He didn't want to be part of the conquest to rule the world anymore and created the country of Equalis for those who needed a place where everyone was welcome. Everything was going fine, but the flashbacks Whyr Nauth had been receiving had a negative effect on him. It appears he lost his memories and repressed his emotions because of the trauma he went through. Eventually he starts a crusade of death and destruction urged on by darkness inside of him. It's later revealed that he was possessed and manipulated by an ancient being that was dubbed Evill. Whyr managed to escape Evill's influence and gathered allies to defeat him. In the ensuing battle Whyr died sacrificing himself in order to give all of his strenght to his allies after he received a fatal wound.

Equalis was not the first kingdom that had Whyr Nauth, or Whyrrian Nautil as he was called back then, as its king. He used to rule over Equilibrium together with his sisters Ilia and Liszia.

Equilibrium was powerful and its people lived happy lives. But problems started arising, pirates and terrorists who wanted to take this paradise down, people with lots of wealth and influence thirsting for more power, and resources started running out. More and more problems started to appear and Whyrrian Nautil became desperate.

He was the powerful and wise king of his people, but he was not powerful enough to protect everyone. He left the kingdom under the protection of his sisters and set out to seek knowledge. he wanted to know what he had to do to. He searched everywhere in the universe, from one edge to the other. On his journey he had many adventures and learned a lot, but he did not learn what he needed to know.

When he returned to Equilibrium it turned out another kingdom had declared war on them while he was gone. Equilibrium had suffered heavy losses. He thought himself a fool, going away with the intention of saving his people only to doom them even further.

He joined his sisters and they waged war. He was sure that they would win and that he would find a way to save Equilibrium.

The next day the enemy army appeared just outside of the orbit of their home world. They were waiting for them. Suddenly a dark force wiped out their enemies. It slowed down and they could all feel the intense evil aura coming from it. Everyone was completely silent and then it spoke to Whyrrian Nautil.

"King Whyrrian Nautil, you want to protect your people, don't you? Let me show you the way, I can grant your wish" it said.

"I will not make deals with an entity like you" Whyrrian Nautil responded.

It did not bother to reply. It simply sped up again and suddenly Ilia and Whyrrian Nautil had been knocked down into the capital of Equilibrium before they could react. A blinding darkness was in the sky and suddenly it came down upon the city. Whyrrian Nautil could feel each and every single life be taken one-by-one in rapid succession as he lay there unable to move. After what seemed like ages he could feel the life of the person closest to him disappear, Ilia.

He could not utter a single word while all of this happened.

That's when the entity spoke to him again.

"You have been seeking knowledge and power to protect your people for a long time. You have traversed the universe and become a legend. You never found your answer however. Those times are gone now for the answer is right in front of you. It's all around you! The universe runs on it. Will you accept it?"

After that Whyrrian Nautil passed out. He woke up after a long time. It felt as if his body, mind and spirit had been ripped apart and patched back together with tape and that may be what had happened. He was imprisoned in a strange device. He still found the strength to break out of it.

That's when he realised he didn't know who he was and how he had ended up there. Everything was hurting and he was being attacked by something. He didn't know what he did, but he wanted it to stop and it did. He walked through white hallways wand when he passed a window he saw a ghastly figure incased in armor in the reflection. Suddenly something came back to him, he wanted to unite everyone and create a paradise by any means.

He wandered through this facility for a long time when a certain figure he would come to know as Mr. Omni appeared before him. He offered Whyr Nauth the chance to create this paradise and Whyr Nauth accepted...

Whyr Nauth can take on many forms, but he often assumes that of a young handsome man with light brown hair and yellow eyes. It seems that he prefers to keep the form he used to have when he lived in Equilibirum. He often wears a cape, gloves and plated pants as shown in the image.

He was cold and calculating at first and didn't seem to care much for the wellbeing of individuals as long as he could unite the world. He became less cold as time went on but then he was corrupted and he became very sadistic and violent. After he got purified by Melvin his personality changed into a somewhat warmhearted and charismatic person, however a darkness still lingered within him. He abandoned his ambitions of ruling the world with an iron fist and created the country of Equalis for all the people that had gained abilities and for monsters, normal humans were welcome too however.

Dislikes: Enemies of Equalis, people who waste their powers, discrimination

Same as before to a much higher degree plus Earth Manipulation (Can cause Earthquakes, Can open tears in the ground to hell), Duplication, Summoning (Can summon demonic minions to attack his foes), Astral Projection, Power Bestowal, Life Manipulation, Death Manipulation, Necromancy, Petrification, Creation, and Power Nullification

Stamina: Infinite (He can never run out of energy or tire)

Intelligence: Extraordinary Genius (Can hack anything on the planet, took over half of the world together with Ripodanof through both power and wit in two days and was able to maintain this empire. Can easily create advanced futuristic technology and infrastructures. Created the country of Equalis out of nothing and managed to attract many monsters and humans within a day etc.)

Weaknesses: He can only use one of the Kraata powers at a time.

Kraata Powers: Whyr Nauth possesses all forty-two of the powers used by the forty-two variants of Kraata and, thus, Rahkshi. Some of these powers are already provided otherwise due to his nature, such as shapeshifting and mind reading. He can only have one of these powers active at a time, but he can easily and rapidly switch between them.

Retrieved from "https://fcoc-vs-battles.fandom.com/wiki/Whyr_Nauth_(Everybody_Wants_to_Rule_the_World)?oldid=321757"
Community content is available under CC-BY-SA unless otherwise noted.