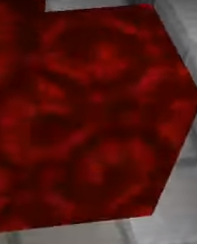 The Void TNT is a compact cube of pure energy and the main focus of the Void Decay Mod for Minecraft. When ignited, it will spread out pure, purple energy similar to Nether Portals that will consume all matter in its path and can only be halted by Cleanse TNT. It can even destroy bedrock and will eventually destroy the world if not stopped in time.

The energy is not sentient; yet can fully act on its own, implying it is not just mere energy, but a force of sorts.

Tier: 3-B, can negate conventional durability

Powers and Abilities: Pocket Reality Manipulation (the block itself is able to contain all of the void energy inside of itself until it is ignited), Reality Warping, Spatial Manipulation, Null Energy Manipulation (conjures a purple energy that consumes all matter it touches as well as things like trees and plants), Void Manipulation, Matter Manipulation, Durability Negation, Intangibility, Flight (the conjured energy can freely fly through the air, all on its own), One Hit Kill (the block itself will one-shot any player in Survival Mode too close to it when it spreads the energy), Immortality (Types 1, 3, 5 and 8. The energy isn't truly sentient, yet can act on its own and seems to be some kind of independent acting force. It can only be destroyed by Cleanse TNT, and even then, it can regenerate from other chunks of itself. For as long as one bit of the energy is there, it will always regenerate. It will never naturally disappear), Non-Corporeal, Regeneration (Low-High), Transmutation (the energy is capable of converting matter into itself. Sometimes, it will not fully destroy or convert the matter; instead, in this case, the matter will still have their original shape, but be intangible and composed of the energy), Light Manipulation (when about to release the energy, the TNT glows pure red), Size Manipulation (the energy can freely grow its own mass without limit), Duplication (the energy can bring forth more energy from itself), Damage Inducement, Pain Manipulation and Death Manipulation (if the energy makes direct contact with an organism after it has been released, it will constantly "hit" or otherwise cause damage/pain to them until they die from it), Telekinesis (if an organism dies from its insta-kill upon being conjured, they will be launched several meters away) and Body Control (the energy is usually made out of various cubes of energy that stick to each other, but sometimes individual chunks of the energy can remove one of their surfaces)

Attack Potency: Multi-Galaxy level (it will consume all physical matter in the world over time and can even destroy bedrock; there is not a single block in the entire game not affected by it, except for possibly Void TNT that has been ignited. The energy is specifically programmed to keep on going endlessly. If left alone for ages, it will eventually destroy the entire dimension it was ignited in, and it will still be going. Simply put, if not stopped, the entire world will be gone), can negate conventional durability (anyone that touches the energy or is inside of it will take constant damage and die very quickly)

Speed: The block is Stationary. The energy's speed Varies.

Durability: The block itself can be destroyed and will cease to be when the energy is released. The energy seems to be indestructible; only Cleanse TNT can destroy it.

Range: Gradually increases the longer it is around. Maximally Multi-Galactic to Universal

Weaknesses: Cleanse TNT can destroy the Void Energy (although it can no longer fully destroy the energy if there is too much of it already). It is unknown if it can destroy charging Void TNT blocks.

Note: In VS matches, this item can be used both on itself (how exactly the energy and the block come to be should be discussed in the thread) as well as a part of Steve's arsenal.

Retrieved from "https://fcoc-vs-battles.fandom.com/wiki/Void_TNT?oldid=208232"
Community content is available under CC-BY-SA unless otherwise noted.