FC/OC VS Battles Wiki
Register
Don't have an account?
Sign In
Advertisement
in: Characters, Evil Characters, Lawful Evil,
and 97 more 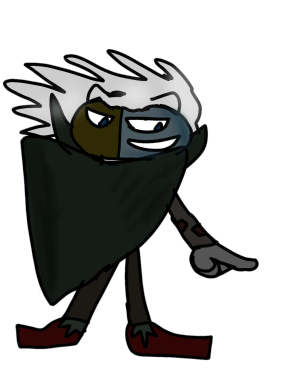 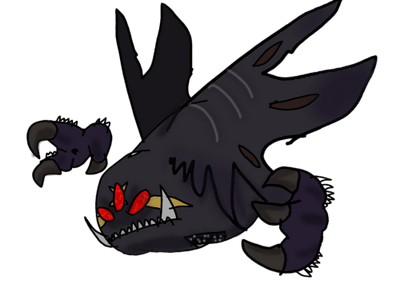 Vexilius Vrikurus is one of the main rulers of the Yukos last realms, the Celestius, where he became a ruler of that location, highly praised by the population. That was until he heard about the Stones of Higher Ascendents, gems that will grant those unlimited power, where all of reality will bown down to his own will. Vexilius grew insane because of this, where he quickly turned from a highly respected, funny and gentle leader to a dictatory tyrant of the kingdom. Due to destroying planets, solar systems across the galaxy, he was instantly considered a Galactic Menace level, attracting the attention of one bounty hunter looking for money, he tracked the location of Celestius and saw how miserable of a place that was. Upon locating the reward, he actually was suprised that the descriptions were both right and wrong at the same time

he actually was suprised that the leader was not that bad of a guy after all, as he started having a tea party with him, asked about things he liked, showed some unique characteristics of his world, etc. so he decided that the reward was actually misleading, until he researched further. By reading his (secret) own personal diary, he discovered the actual malicious plan of the leader and that yes the descriptions were right, before he could stop him, he started gathering all the Stones of Higher Ascendents to become the overlord of all kings. However, once Dark Legion defeated him he was transformed back to his normal state and was taken away to the Multiversal prison alongside other interdimensional criminals.

Vex appears to others as a simpathic and caring leader, who always is shown to have immense respect for his allies and rest, but hiding under the decorated table, is a malicious, sarcistic, greedy, inmature being who always wants the things for himself and only. When he gets mocked, he usually gets a bit agressive but not all the times, but once he's truly mocked, the raging beast within him is enraged, and he quickly turns into a monster of total despair.

see the pictures above

Dislikes: Those who try to take over his throne, beings who try to stop his ultimate plan

Superhuman Physical Characteristics, Flight, Has mastered every type of martial combat within his kingdom, Can shoot eye beams which are made of internal temperature, Natural Weaponry (His species is capable of attacking with their own claws and even teeth), Weapon Mastery (Can use many types of weapons such as guns, swords and maces to fight against opponents), Air Manipulation on a Planetary scale (Capable of creating entire tornadoes and push the air in a offensive way. Absorbed a entire atmosphere), Absorption, Ice Manipulation (Said Ice turns the enemy into a Absolute Zero state of frozen upon touching), Acrobatics, Instinctive Reaction, Natural Weaponry (Teeth and Claws), Shapeshifting (Can alter his body into different shapes of himself), Non-Physical Interaction (Grabbed Necroas's shadow to demonstrate some of his powers), Darkness Manipulation, Water Manipulation, Shockwave Creation and Vibration Manipulation (Both of which can cause entire earthquakes), Hair Manipulation (Can use his hair as a method of physical attacks), Teleportation, Genius Intelligence, Thought Based Forcefield (Said forcefield can also reflect attacks coming at it), Summoning (Of his dragon, weapons, guard, etc), Transmutation (Can transform things to anything he wishes to be, for example as he turned a tree into his own personal castle), Life-Absorption (With his hair, he can stab the opponent with his own hair which he can transmutate, then absorbing the internal life force of the opponent), Reality Warping, Death Manipulation, Madness Manipulation (Type 2) and Resistance Negation (With his grim death sword, upon a slay the enemy feels death upon himself and starts hallucinating, it stops when he dies. Said sword can even work on beings who has thousands of times the resistance of ordinary ones), Limited Probality Manipulation (With his 10/10 attack, he can cause the chanches of the enemy hitting him to fall down), Regeneration (Low-High: Regenerated from a single path of blood with his body all destroyed. Low-Godly over time: Stated that even after everything within his body be destroyed, he would eventually find a way to get himself back), Pocket Reality Manipulation, BFR, Supernatural Willpower, Statistics Amplification (Via Powering himself up, he can increase his strength to 2x greater than before), Duplication (Up to 70 duplicates of himself), Explosion Manipulation (With bombs, explosives, explosive weapons and etc. Can cause explosions by pointing), Enhanced Senses (Could track down Necroas who was millions of kilometers away from him), Can create black holes, Space-Time Manipulation and Sound Manipulation (Can cause rips in space time and when he does so, immense sounds are unleashed into the ambient), Power Nullification (When he haves enough time to think before the attacks comes, his mind nullifies the attack's energy to not hurt anything at all), Dimensional Travel via Portal Creation, BFR via Reality Warping (He can break reality causing holes in it where he can then throw the opponent at different periods of space-time), Poison Manipulation, Telekinesis, Can go back, rewind, accelerate and stop the flow of time, Sealing (Can summon crystals to seal the enemy in and send them to a different location), Aftermirage Creation, Soul Manipulation (With the Crusher, he can obliterate souls like it's no ploblem), Limited Fate Manipulation (His increased 10/10 now changes the overral actions in the future the enemy will do), Precognition (Type 2: Can see the future up to 8 seconds), Morality Manipulation (Forcefully turned his enemies into allies), Telepathy, Mind Manipulation (His mind manipulation is so powerful that even those {for example Kiolus} who have tanked mind control before couldn't do nothing against it), Immortality (Types 1, 2 and 3), Self-Sustenance (Types 2 and 3), Corruption and Empathic Manipulation (Could corrupt his own population into believing that he was still a good leader despite the actual truth being not), Light Manipulation (Can create rainbows), Weather Manipulation (Could cause a world expanding storm), Regeneration Negation (Up to Mid-High: Stated that he could kill beings with his own levels of regeneration. Could finish off the Great Tyrant for good, who can even regenerate from being turned into gas), Acausality (Type 1), can interact with Nonexistent Physiology Type 1 Beings (Can destroy Voidcool, who is itself a void made out of total nothing)

Soul Manipulation (Stated that his own crusher have no affect on him), Absolute Zero (Survived being the coldest place of Celestius, the Zero Ice, where no one has ever been in during to if anyone enters that area, they would be frozen to -3000 celsius), Extreme Heat (Unnafected by volcanos), Poison Manipulation and Radiation (Can drink radioactive and toxins like if they're were just drinks), Mind Manipulation (Said potency also scales to his own mind hax), Sleep Manipulation (Due to self-sustenance type 3), Reality Warping (Survived his own dimension's reality being broken to pieces, later said "it was nothing" to him), Morality Manipulation, Black Holes and Gravity Manipulation (Can survive within black holes), Transmutation (Unnafected by Necroas's transmutating his castle to it's original form), Matter Manipulation, Power Nullification (Even after having his power stated to be drained, he could still still power himself up higher than before being drained), Corruption and Empathic Manipulation (On a Low Multiversal scale), Status Effect Inducement, Regeneration Negation (Up to Mid-High: Even those who have the same type of negating the regeneration, they would be completely useless against Vexilius), Space-Time Manipulation, Can survive his own life-force being absorbed, and afterwards he is simply normal, Age Manipulation (Cannot age and was can walk in a place where time keeps aging things), Fate Manipulation and Causality Manipulation (Even if his own fate is changed, things he wanted that were changed would still work, even if someone removes a aspect of his history, he would still exist), Existence Erasure (Can survive being erased from history), BFR (Can come back from being teleported to another location), Void Manipulation (Can survive within a void of total nothingness), Sealing, Immortality Negation (Types 1, 2, 3 and 6)

All previous abilities vastly enhanched, plus Large Size (Type 3), Conceptual Manipulation (Type 3: Can grab the feeling of a person such as hate, anger, sadness and transform into weapons for himself or casually manipulate these concepts over the reality of the world), Fire Manipulation, Spaceflight, Creation (Can create inumerable body parts if one is destroyed]], Body Puppetry, Regeneration (Mid-Godly: His regeneration has immensly far increase and regenerated from having his very own resistance to EE being negated and being erased), Law Manipulation (Due to his state as a god, he has now absolute control over the laws, making laws almost instantly to favor himself almost everytime), Madness Manipulation (Type 3), Abstract Existence (Type 2: Embodies the concept of Chaos), Chaos Manipulation, Far Superior Ice Manipulation that it's now colder than Absolute Zero, Aura, Causality Manipulation, Weapon Creation, Acausality (Type 4: Exists now as a being outside of the laws and everything, where the orders of the world simply fall flat for him)

Attack Potency: Multi-Solar System level (Created the Outer Space Dreamlusion, which is shown to contain countless stars and nebulaes), likely High Universe level (Said dimension is stated to be immeasurable in size) | Low Multiverse level (Has granted and merged with the power of 2 Higher Ascedents stones, which were able to merge the Up Realm and the Down Realm into one whole dimension, if used too much they could've destroyed all of Celestius, which houses over half a thousand universes within it, however Vrikurus mastered and have total control of it's strength) | Low Multiverse level, likely Multiverse level (Massively above his normal safe. Would've consumed and then merged every Mirror connected into Celestius, which are all parallel universes. Fought with a amped Dark Legion)

Speed: FTL (Stated to be faster than light. can keep up with Rocket who can fly into outer space in a second) with Massively FTL+ reactions (Capable of reacting to Necroas's punches) | Massively FTL+ (Far superior than before. capable of fully keeping up with Necroas. Blitzed Scarlatte) | Massively FTL+, likely Immeasurable (Kept up and fought a powered Necroas. Capable of going back in time with sheer speed)

Lifting Strength: Unknown | Immeasurable (Can hold up all of Celestius, which is naturally a 4-D structure by itself) | Immeasurable

Intelligence: Genius (Studied all types of sciences recently. can normally control his kingdom without any ploblem. Controlled a scheme which successfully turned the civilization into believing that he was the right choice despite other better people warning them to not choice him. Could solve a puzzle considered "impossible" in less than a minute)

Weaknesses: Is extremely stubborn, always prefering his own ideas than his friends ideas most of the time. his chest can cause damage to him and is certainly a weak spot