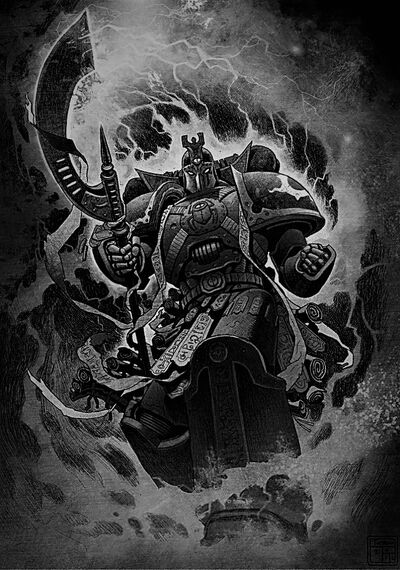 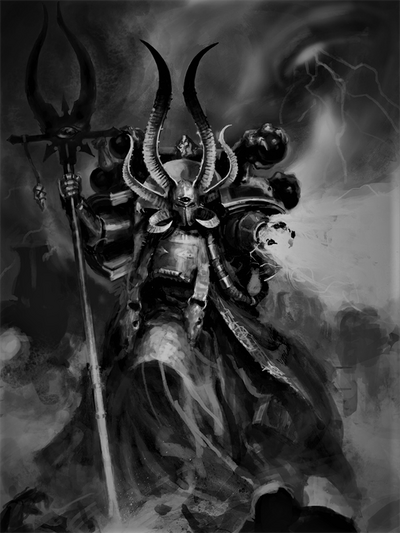 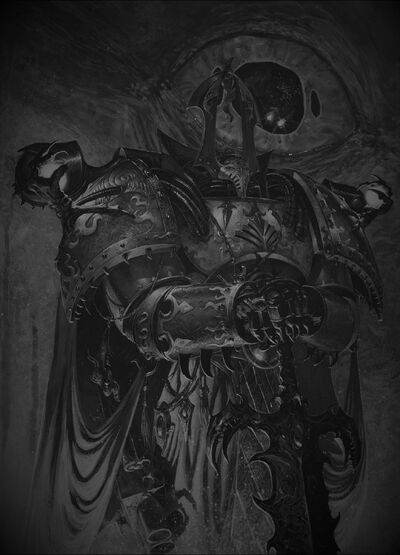 Verbotenes Wissen, is infamously known as The Insatiable, is former ruler of the now over run kingdom of Azunith. He now scales the recesses of a damned earth, in search of all facets of knowledge to appease the festering appetite of a famined stomach, ailing for more to consume.

He is the central protagonist/antagonist of EMPIRE, acting as the main source of conflict and strife in the story, driving multiple plot lines into action in an attempt to herald the apocalypse while being puppeteered by forces beyond his comprehension.

On silver nights, voices of unwavering dread called to the then youthful king, voices unrelenting with torment and the ever-vivid mental abuse swallowed the crepts of his sanity and peace of mind. The never-ending anguish manifested into the material plane in the form of a metaphysical abyss in this monarch's stomach that natural fare alone could sate; What this stomach desired was not food, but knowledge.

Verbotenes Wissen, became tainted in both spirit and mind demanded all manner of scripture and literature to his palace among his people. For countless moons he indulged in a grandiose feast of knowledge. Consuming all variant of thought that was spit from books he laid sight upon. And as time crawled, Wissen grew apathetic of governing his kingdom being too engulfed with the howls of wisdom the papers in front of him offered. Mere months crossed along and all morphed into disarray and chaos among the populous with no regal regent leading their lives. But with a festering frustration of the orphaned kingdom soon shifted their aggravation and rage onto their true enemy, with the finale of striking their fellow man, Wissen.

The march broke through the streets of Azunith as they launched their assault on the castle gates, resistance was futile as their sheer mass of conjoined hatred evaporated the king's defenses. As they clocked into the hall all that was discovered were bodies and walls painted a grim red; The royal chambers were left open, crowds grew around as they lept forth to seek this aloof crown-head. What and their search found were the cut corpses of a bloodied queen and infantile prince, faces disfigured into agony final witness to the knife of a mad ruler.

As if man was frantic in search and greeted with failure, torn pieces of scripture and putrid puddles of a liquid, maroon in color, splattered about beaten books that scoured the area. Crimson footsteps on a trailed to the balcony. The disgruntled mob of the common and peasantry amassed to the terrace, and those that were of the capability of gazing beyond the fleshy mass of wrath and spotted a figure most red upon the hills.

The fervent sovereign of an abandoned people shamelessly limping away from his sin, bathed in the scarlet skin of his kin. Though such homicide was but abstract memory in Wissen's bare brain, for their death in the psyche of such an ill being was justified.

They interrupted his reading time.

Verbotenes' body is that of a significantly older man bearing quite a large amount of muscle and bulk, he is masked with a gruff greying mountain of facial hair; he is notably taller than the average man, forcing many that gave upon him to look up towards the skies. His eyes are a muted gold, similar to star in its moments of twilight, displaying a look of dread and despair to those brave or ignorant enough to peer into his sullen sockets.

Several rotting scabs riddle the outer reaches of his body, passing his looks as that of a living corpse. Complimenting such a comparison is the sickly grey coat of flesh he wears from several years of lambasting his body with hexes and curses to appease the wishes and desires of his otherworldly gods. The hairs on his scalp are nothing more than thin air, as time's cruel grip ripped them away from his possession. The golden locks he wore with such grace in youth are left as simply singular strands of greyed hair, serving eternally as a grim reminder of an age ashen to lie.

Flamed forth in the maw of strife, he dons a ghastly layer of iron flesh, festering with the wounds of various brutal battles, weeping ever-more the dampened blood of his foes upon its metallic tissue; The armor exudes trepidation and breathes in the death that Wissen spits out. Its infernal existence was birthed from the decaying corpse of an Arch-Daemon. Its bones were harvested and smelted into a nigh-impregnable carapace still possessed by the damned soul of the hellish denizen. The demon-mail is adorned with various insidious insignias and sigils of the eldritch entities that Verbotenes claims vile worship to, each hexed with diabolic maledictions and jinxes.

The heads of vicious hounds mount themselves on his shoulders and knees, as the faces of the agonizing tortured ride upon the reaches of his chest and back wailing to be let guided into the grave. His cranium is bitten down upon by a malevolent helm with grand spikes piercing the heavens spring from his dome as if a denizen of the very hell he wakes. The names of various daemonic deities etched on all sides of it's head coated with a faint vile glow. With the daemon's clutch still in possession of the malignant armor it spits its corrosive poison from its fiendish throttle in to the shattered psyche of Verbotenes. Further gripping his consciousness into the realm of the inane and mad.

Verbotenes is a figure who drags forth shame and dishonor to his previous position as the prestigious, self-righteous ruler of Azunith; From afar, his vision gazes upon the senseless carnage he has caused and becomes flushed a manic joy. A malefic ecstasy that floods and fleshes the boundaries of Wissen's brain, staining his sanity with the unremovable blotches of a sinister sadism that has been gained from his infernal understaning. Knowledge that molded the crude clay of his mind to perceive the life and plight of man as a macabre experiment employed by god himself.

A self sown idea in the soil of his psyche that has made Wissen all the more eager to become another ‘scientist’ in this god’s grim plan. With Verbotenes, exploring and examining the variable methods of death and pain that could be inflicted on the individuals around himself at any given opportunity; With the first guinea pigs to his trials proving to be his family at the inception of his intellectual odyssey. Each, his wife and son, succumbing to the degenerate desires of how far Wissen thought himself capable of committing murder.

A thought process extending to Wissen’s own body. Willing desecrating his flesh and soul with profane hexes and modifications for the sake of progressing his quest in the attainment of further knowledge. But in contradiction to such disregard for his well being, Verbotenes, still holds his own life in high regard when undertaking the scientific ‘tests’ he imposes others and himself; Preferring the luxury to lavish in the intellect Wissen has gained to measure its weight and worth to him in the pursuit of enlightenment.

But what fundamentally drives Verbotenes’ manic chase for intelligence stems from sensation of a ravenous hunger that drives his very existence and purpose as an entity. Actively seeking and scouring for all manner of exotic wisdom in a feeble attempt to feed the eternally empty stomach stowed within his abdomen; Rooting all motive and passion for the sake of sating the fiendish famine clawing at his brain and body with every passing second he steps and breathes upon the world.

A wish that has left him hollow in motivation that is not to gorge himself on any information, no matter how truly vapid in substance, temporarily fill the intellectual abyss in his body.

Across a myriad of lands, Wissen's name has been transformed into a damning say of sorts in the tongues of beast and man alike. Tales and stories of Wissen's escapades to power garnered attention from entities foreign to the mortal realm, becoming beacon to the both the obscure and vile; He has become less than grateful of the notice he has caught as this has caused many unwanted guests to interfere with his schemes.

To the mortal minds of Asterisks, he is an abomination given name and form. To the church of the Demiurge, he is the herald foretold to bring of the end of days. Amongst the Elder Fiends he is a valued pawn that enacts their wishes without question or second thought. But to himself, Wissen is a man seeking true erudition and wishes to claim it unimpeded.

Attack Potency: At least Large Star level (Made a significantly bright star vanish from sight in the sky. Disintegrated Orcus on the atomic scale, a planet similar In size to that of Venus). Varies With Psychic Pulses (Causes an incredible amount of damage to the universe with each ripple made. But each shock wave produced differs in intensity and ranges from volatile earthquakes to the rumbling of entire galaxies). Standard Attacks and Techniques Ignore Durability

Speed: Hypersonic Movement (Creates afterimages with the level of speed he travels), with Massively FTL Reactions and Combat Speed (Attacks take seconds to reach planets on the other side of the solar system. Can keep pace with beings of his level and power. Light moves a snails pace in his vision)

Durability: At least Large Star level (Capable of withstanding the intense backlash of every one of his attacks. Can take various strikes and bolts of energy from beings of similar level to his own, more notably one's such as Geisteskranken Priester who to some degree is capable of matching him in raw power and skill)

Stamina: Extremely High (Spends numerous months walking across Asterisks without a drop of sweat on his person. Engages in lengthy and arduous conflicts against a multitude of combatants on a daily basis. Has gone entire weeks without need of food, while still at peak physicality)

Intelligence: Supergenius. Extremely apt strategist bearing tact capable of leveraging virtually every fault presented by his foes into surmounting advantages, lacking hesitation or guilt to deal killing blows whenever fully capable of. Incredibly well versed in numerous forms of mystical arts and magic. Pragmatic enough to attack the very concept of a barrier or attack if he is unable to overpower an attack or unable to break a shield or force field by conventional means. Despite being in quite a dark age of scientific knowledge, he is quite well informed on the fundamental nature of the universe he resides in and the beings that lay beyond it; Alongside being a leading mind in the creation of multiple methods of thought intrinsic that proved fundamental to the personal philosophies of his opponents.

Weaknesses: His mind is shattered and destroyed from the various encounters with that of eldritch nature, and have made him some what insane and delusional. His stomach is the source of a majority of his power, and finding a method to seal it off will cut off much of his supernatural strength; Though is in it of itself an extremely difficult and dangerous as the stomach reacts to what potentially threatens it's existence and increases the amount of power generated. The psychic pulses unleashed by the stomach cause severe mental anguish to Verbotenes and greatly hinders him during combat, but has shown to at times push through in very stressful situations, but with a measure of difficulty.