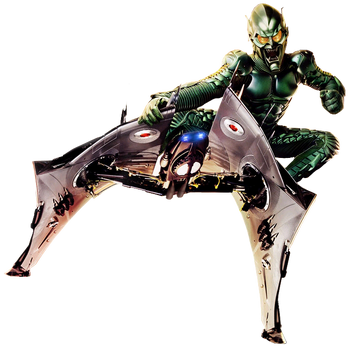 Dr. Norman Osborn was tasked with replicating the Super Soldier Serum following the previous failure, which created The Hulk. In a desperate move to save his company, Osborn self-tested the flawed serum; successfully increasing his abilities, but warping his mind into a wicked new persona: The Green Goblin.

Durability: At least Wall level (His armor is bulletproof)

This page is a candidate for deletion.

If you disagree with its deletion, please explain why at Category talk:Candidates for deletion or improve the page and remove the {{delete}} tag.

Remember to check what links here and the page history before deleting.