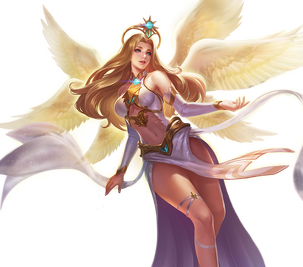 Remia
Add a photo to this gallery

The singing part is what she sung when sent to tartarus. It is canon. Note: the | is indicating a flow change

Singing - They say i'm broken, But i think i've just been chosen, Bleeding hearts of the birdies i've woken, I just cannot be heartbroken. | It's all over now, my story is over now, | for the people i've murdered, does your loved ones wish to see me murdered? | You ask if i regret a thing, but i've always been meeeeeee. I am not swayed by love's gratification, no sorrows of loss the only thing i feel is predation, my story is not yours to tell i do not need narration. | The sky is crying, bloody clouds of the angels that are dying, I've just been scrying, for an intense battle, oh i've been trying, everywhere i go something is always dying, is it bad that is satisfying, i cannot help it that no one is undying. |

I am a god of war, i'm not just an angel whore, they wish i was a herbivore, but i've always been a carnivore, In the end i'm just uncared-for. | Clashing steel of an epic battle, piercing arrows of an epic battle, | I've always lived for one thing. I was not born to be the sameeeee

Rapping - I'm flexing on you and i have 6 damn wings, pull up and fly up and hit you with an angelic light beam. | Leaving you blinded that's a grand smite, that is not just a bright light, body crippled and you can't fight, when you step in the afterlife make sure you stop at the first light. | Yea i'm a whore, despite that you mortals aren't even something i look for, when the war begins who are y'all gunna ask for? |

I can spitity, pitity, drag em across the floor vicinity, zero fucking amity, that sight is so shocking vividy, when i get wickedly crazily with my lyrical ability.

She is said to be broken cause she is the most fucked up angel. Uhh, she thinks it was fate that made her that way, god specifically. She does not blame herself. Bleeding hearts of the birdies i've woken means she is awakened by death, blood, violence. Birdies meaning angels, but could work for regular birds too. She is also saying she is not swayed by love, she just wants to fight and kill things. The sky is crying is referring to the death of angels. Not rain, but blood rain which is why she said "bloody clouds of the angels that are dying. She said she has just been searching for an epic battle, but she can't help the fact nothing is truly immortal, thus death is destined to follow her everywhere whether people like it or not.

Retrieved from "https://fcoc-vs-battles.fandom.com/wiki/User_blog:DemonGoddessLiltih/Remia%27s_Song_and_Rap?oldid=248753"
Community content is available under CC-BY-SA unless otherwise noted.