Start a Wiki
This page's content has been marked as 18+.
This page contains sexual or otherwise graphic content that some may find disturbing and that should only be viewed by those over 18 years of age. If you are under 18, you shouldn't be viewing this page. 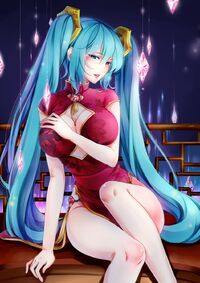 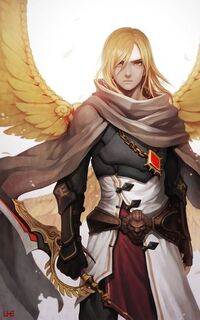 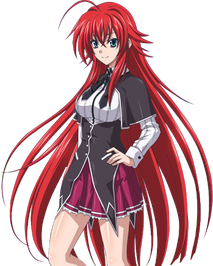 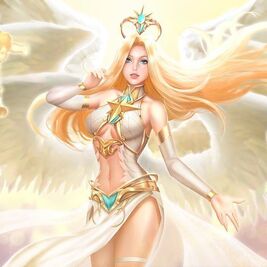 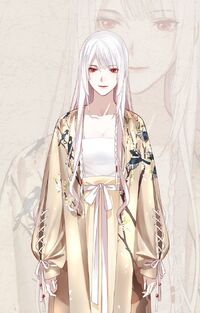 Gabriel
Add a photo to this gallery

"Your end lies here mother." Lucifer told Azura as balled her fists up. Her red crimson hair flared up in anger. Azura was sitting in the middle of the angel council room with crossed legs as they rested on the table. Azura patted her mouth and yawned. Michael who was standing far left of the four archangels looked down in embarrassment. Gabriel looked like she didn't even want to be there as she showed little reaction. Remia who was to Luicfer's right had both of her hands on her hips and smiled as she stared at her mother.

"By you lot? I created you. I am not you daughter, i don't create my creations anywhere near my strength." Azura mocked Lucifer as she blew her a kiss. She noticed Michael's uneasiness in the situation and said

"And you? I can't believe you of all people to take part in something like this. Aren't you supposed to supposed to be my number one?" Azura made an innocent pouted face at the angel who only blushed. Azura smiled and looked at Remia.

"Well, you'll always be you." Azura said to the angel of war before she turned her gaze on Gabriel. Gabriel shook her head before she could open her mouth. Azura made a face that pretended like she was hurt as she didn't bother speaking to her.

"Guys, we came here for one thing. Stay focused." Lucifer said as she never took her eyes off of Azura. Remia was the first to sprout her beautiful white wings. The rest of them looked at her at the same time. Lucifer smiled as she also erupted her wings from her back. Lucifer did so with more ferocity than her younger sister did which made Azura look at her oddly. Michael was the second to do so, however he had his eyes closed, and then Gabriel finally followed.

"Y'all are serious? The four of you together can't even best Odin. Why in the hell do y'all think you can take me on?" Azura asked seriously and with disbelief however none of them responded. Azura grewed annoyed.

"Children. You get your wings... From me..." Azura said calmy yet with much malice in her voice. Gabriel seemed to be intimidated as she unconsciously tucked her wings back in her back. Azura stood up slowly, and then she arched her back and 24 white wings sprouted from her back. They were smaller than the ones of her children, but she had 4 times what they each had individually. Remia licked her lips in response. Lucifer's eyes turned red, hinting she was going to be fully serious. Michael's eyes creeped open to look at his goddess. He was in awe, as he saw her beautiful white wings spread out elegantly as she had her arms spread out showing divinity. Gabriel took a step back but Michael put his hand on her shoulder to stop her in her tracks.

"This is the last time i am going to tell you lot. Submit. If you do so now i'll spare you all. However all of you will be punished for this behavior." Azura stated. Her voice was soft, yet powerful. Gabriel instantly bended a knee after she finished her command. Azura and the rest looked over at her, Gabriel was shaking terribly. Remia however was admiring how much strength her mother was displaying.

"Yes... Punish me like you did so many years ago, my goddess..." Remia said with complete lust as she put her hands on her cheeks. Lucifer slapped her sister in the face extremely hard which shocked Azura. Remia moaned slightly after she was hit in the face.

"Hmm... Turn against your sister, Lucifer, and i'll give you what you always wanted." Michael looked alarmed as he looked up at her. Azura winked which made his body shiver. Lucifer was disgusted.

"Don't fall for her tricks. Let's just kill her already. We don't need Gabriel's weak ass. Us 3 can do this." Lucifer said confidently. Michael seemed to have gotten back to his senses upon hearing that. Azura sighed.

"Okay, how about this. Michael, if you join me against her, i won't destroy her right now. Better?" Azura once again tried to win him over to her side. Michael seemed a lot more uneasy this time as he cared for his younger sister more than anything.

"Screw this talking shit." Remia said abruptly which made them all confused. She flapped her wings, formed two light swords in her hands and flew at Azura, flying above the table that was in front of her. Azura grabbed her swords with her bare hands. Lucifer appeared from behind Azura, and formed a golden light aura around her body and went for a kick at Azura's neck. Lucifer got her right leg cut off with one of Azura's wings. She then used one of the 12 wing on her right side to instantly cut her head off before she could react. Michael eye's widened instantly, and Remia's face turned extremely malicious. Azura shattered her light swords with her hands, and then punched a hole through Remia's head. She then used her right leg to push her corpse off of her left hand. She flew towards Michael tearing right throught the council table in front of her, she grabbed Michael's chin with her bloody left hand and lifted him off the ground. Gabriel was still kneeling on the ground, more fearful than ever.

"I'll make more." Azura said coldly, Michael looked terrified as she narrowed her eyes. She uses her right hand to swipe his head off in one quick swoop. His head dropped to the floor and she crushed it under her bare foot and then wiggled it.

Gabriel is the weakest, and she is not a fighter type, so she was the most afraid of her creator. Technically she could have saved the rest with her extremely potent barriers, but she can't even react to the movements of her fellow archangels let alone her creator. Lucifer got her leg cut off and beheaded, Remia got a hole punched in her head, and Michael got his head swiped.

Retrieved from "https://fcoc-vs-battles.fandom.com/wiki/User_blog:DemonGoddessLiltih/God_vs_Her_Archangels_(Theoretical_Battle)?oldid=249716"
Community content is available under CC-BY-SA unless otherwise noted.