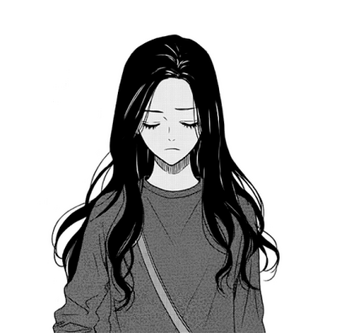 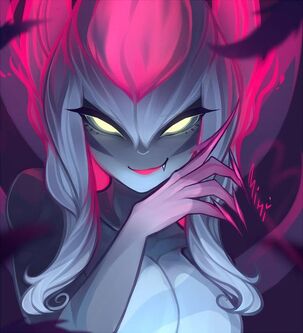 Astaroth
Add a photo to this gallery

"Boom! I totally have an idea!" Aria said out loud as she was slouched over the arm of her couch with her head touching the floor.

"The hell did you have conjured in that pretty little head of yours?" Astaroth's voice responded to her from upstairs.

"You used to be human right Astaroth?" Aria shouted at the demoness. Suddenly Astaroth teleported downstairs right in front of her face. Astaroth had a towel wrapped around her and she had her arms crossed as she looked down at Aria. Astaroth raised her foot which alarmed the goddess

"Wait wait wait!" Aria said in panic which stopped Astaroth in her tracks. The demoness looked at her with an annoyed expression as she closed her eyes.

"I know that subject is rather sensitive, however, i brought it up because... Have you ever heard of Santa?" Aria asked her friend as she fixed her position on the couch and began sitting along the arm of it. Astaroth didn't reply for a few seconds. She put her hand to her forehead in disbelief.

"That jolly mother fucker? So what if i did?" The demon asked. Aria smiled and tapped her head with her index finger trying to show that she thought this through. Astaroth did not show a reaction to it, which made Aria speak again

"Well... I know he's not real. Well, technically speaking all things thought up are real." Aria had a lot of confidence in her voice which made Astaroth unintenionally crack a smile.

"The way humans work, whatever they think instantly manifests in the astral realms. However we have the ability to do that on the mortal realm." Aria followed up in excitement in her voice. Astaroth shook her head.

"You sound like a little girl. So what you are saying is, you want us to manifest Santa claus? Creating any type of being is dangerous and risky." Astaroth remarked. Aria pouted in response. She put her finger up and said

"Yea, i thought about that. But what if... We simply bring Santa from the astral realm, to the mortal realm. That way there is no risk with him being too powerful and going rouge. After all Santa is a human creation, we would be merely bringing it to this realm." The goddess followed up. Astaroth thought to herself for a second.

"That sounds like fun. Let's go get ourselves a Santa." Astaroth answered with a big smile on her face as she snapped her fingers and instantly put on her demonic outfit again.

In God Genesis, whenever a being with divinity level creates another being, there is always a potential risk. As they could intentionally create something too powerful with no means to control it. Anything with divinity level can grow evolve and could potentially overthrow the beings that created it. Whenever a human thinks a thought it manifests instantly in the astral plane, since most people don't have divinity energy unlocked, they cant instantly manifest these things in their world. If they had it unlocked they could. By going to the astral and bringing a creation created by a person into the mortal realm, there is almost no risk, compared to if they just tried to conjure him up themselves. Especially aria since her strength is top tier.

Retrieved from "https://fcoc-vs-battles.fandom.com/wiki/User_blog:DemonGoddessLiltih/God_Genesis_Christmas_Special_Part_1:_A_Splendid_Idea?oldid=250145"
Community content is available under CC-BY-SA unless otherwise noted.