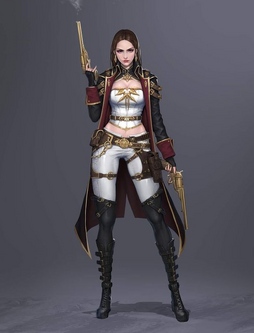 Unknown Athenian General
Add a photo to this gallery

The General and the Spartan Army stood atop of the canyon peering off of it looking down at the few dozen Athenian warriors at the bottom. The Athenians were setting up camp outside of the canyon, planning to explore it first thing early in the morning. The Spartans formed a V as they stood near the edge, resembling the symbol on their shields.

"General, they outnumber us, what should we do?" One of the hoplites asked. In the middle was the Spartan War General named Gallus. He was wearing full bronze armor, and had a golden spartan helmet with a red mohawk at the top. He had his shield in his left hand, a spear in his right hand, and he had a curved sword strapped to his waist.

"We wait. When i say attack, you attack." Gallus said firmly and with full confidence. Suddenly, an Athenian soldier came running from the forest behind the rest. They all turn around quickly and raise their shields and weapons in preparation for a fight. The Spartans all looked worried, as if their plan had failed, when suddenly, a woman comes walking out of the cave casually.

"Who is she..." One of the soldiers asked. Gallus tilted his head as she made her way to the exhausted Athenian. The woman walked with so much sass and confidence he was shocked for a second. All of the Athenian soldiers moved out of her way as fast as possible, which made the spartan general even more curious.

"Scout, what is it?" Asked the woman. The man began telling her however the spartans couldn't make out what was being said from the top of the canyon. Gallus feared his plan to ambush them was in jeopardy so acted instantly. The words

"KILL THEM ALL!" was screamed as loud as possible from top of the canyon. The scout, and the other Athenian soldiers instantly turned around. Spartan soldiers began running down the left and ride side of the canyon. The Athenians stood their ground when suddenly, arrows fire from behind them. Several Athenian soldiers were struck from behind, some died instantly when they were pierced in the head or neck, some dropped to their knees or fell to the floor when shot in the back. One of the arrows came straight for the woman's head, who catches it with her bare hands as it is inches away from her face. Gallus saw this, so he snarled and made his way down the canyon to particpate in the fight. However unlike the rest, he slid down from the edge of it, which caught attention from the woman who turned around. She and Gallus met eyes and began walking towards each other. The woman had long brown hair, she was wearing a black pirate coat, a white top that exposed her stomach, cleavage and shoulders. She also had on white pants with black thigh high boots and 2 golden revolvers on her waists. As they began walking toward each other, the spartan warriors who took the long route finally made contact with the Athenian soldiers. The Athenians split their focus. The ones exposed to archers had to turn around and go after them while the ones in the front had to defend against the spartan onslaught. Both sides charged each other as the woman and Gallus walked casually ignoring everyone else. The sound of iron shields clashing together struck the battlefield first. The woman and Gallus lose each other in the chaos as everyone started fighting. A spartan solider tried to strike the woman with her spear, however she grabbed it, drew the gun on her right, and blew his brains out. The loud sound of the shot did not affect anyone as the fighting, screaming, and weapon clashing was already loud. The woman put her gun away, and started using the spear of the killed spartan. An Athenian soldier came with his sword raised at Gallus, who leaned back to dodge, kicked the soldier in his chest sending him flying. He collided with a spartan soldier who was also sent flying with a kick from the woman. Gallus and the woman both lunge their spears in the throats of kicked soldiers. Gallus pulled his spear out quickly while she did it slowly as she eyed him the entire time. Suddenly she is attacked on her left and right by two spartans with spears. They both tried to impale her in the head, but she spun her spear around deflecting the spears, she spins 360 while slashing in a circle beheading both spartans as the same time. She yelled

"Huwah!" as she killed them swiftly. She then ran at Gallus who backed away from the battlefield so that they could battle in open space. The woman jumped at him and thrusted her spear at his helmet with her right arm, Gallus side stepped, turned his back towards her and tried to swipe her head off, the woman leaned back and slid on her knees, however Gallus followed up by bringing his spear back to his front and tried to stab her in the head. The woman rolled to her right, got up quickly and put her spear behind her back. The woman spun her spear around her back slowly as they eyed each other.

"You... You are not an Athenian. Yet you fight like Queen Gorgo, and your outfit is not of Greece. Tell me who you are." Gallus said with a dominant voice as he planted his spear in the dirt. The woman seemed triggered by whatever he said for some reason as she started twitching slightly but noticeably still.

"You fight well. As expected of a Spartan General. I wanted Leonidas but i'll settle for you." The woman responded as she also put her spear into the ground. The two walked in circles staring at each other.

"You... You're a Spartan aren't you?" Gallus said with a slightly noticeable smile on his face. The woman smiled as well and did not say a word for a few seconds.

"Am i?" She finally responded as she picked up Gallus's spear and he picked up hers. Suddenly, an arrow grazes her right cheek and cuts her. She did not react to the pain at all, but she turned around to see who shot at her. She was disappointed when she saw all of the Athenian soldiers were dead. The first thing she saw was a spartan pulling his spear out of the chest of an Athenian. She smacked her teeth as all of the soldiers turned their eyes on her with their weapons up. She saw on the small hill at the back the archers were victorious and were all aiming at her now. Gallus put his spearhead on her neck. She looked downward at it in response and then turned her gaze back onto the hoplite army. The battlefield was bloody, however she only saw 10 dead spartans and her entire Athenian army of 48 were dead. She sighed.

"Athenians are worthless dogs." She said with much disappointment in her voice. Gallus noticed her hatred towards them and said

"You really are from Sparta..." the woman rolled her eyes in response and dropped her spear.

To be continued in Cave of the Cyclops

Note: This is just a draft

Retrieved from "https://fcoc-vs-battles.fandom.com/wiki/User_blog:DemonGoddessLiltih/301_-_You_Fight_Like_Queen_Gorgo?oldid=255156"
Community content is available under CC-BY-SA unless otherwise noted.