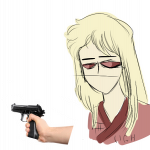 Oh ho, you found me!

I'm DMUA, it stands for Der Mormon Uhrwerk Affe, which is German for The Mormon Clockwork Monkey. I'm apart of the calc group on VSBW, and if a request for your verse is something I can manage, I'll take care of it.

Well, if you want to DM me, my discord is DMUA#4036 so you can hit me up there. If you don't use Discord, then hit my wall for wherever else you want. I'm not all that picky.

My verses include Jack of All Trades, which I haven't touched in eons because I slowly begun to realize it's worldbuilding is utterly loaded with holes, and I don't really have a consistent vision for what I want to be, since, despite how heavily it's conflict and powersystems surround life and death, I personally don't have much investment in those themes. I'm a simple guy who just believes I'll live, then eventually, I'll die and see whatever happens next. So, I don't really have much to say... Which is a massive problem when trying to make a compelling narrative.

Oh wait that turned into a rant, oh yeah, another one is Objects of Subjectivity, which I am a bit more interested in. It's in it's early stages, I've made an RP on discord to sort of explore it, but that's been going slowly.

I also have a few characters from games in other people's verses, which are either just... the embodiment of cringe like Gergy from the original SAO Tabletop, or pages I haven't really bothered to update to completion like Gal

(Given to User:BlazetheStriker over Discord)

Advice given to sticklers for tiers

Retrieved from "https://fcoc-vs-battles.fandom.com/wiki/User:DMUA?oldid=287465"
Community content is available under CC-BY-SA unless otherwise noted.