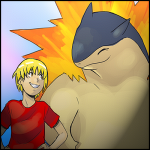 Greetings! Welcome to my page. I am Antoshi, real name Anthony. I've been wading my feet in this fanfiction writing game since 2003. Back then I had the idea to create a series of stories starring an original character named Antoshi who lives in the Pokémon universe with a slew of other original characters. All these years later, the drive, passion and ideas I had for that universe of my own creation still lives on. I love all of my characters and the world they live in.

Additionally, since then I have become known on YouTube as PlayingWithMahWii. There, I've created almost 2,000 commentary gaming videos on various genres and platforms in a "Let's Play" style, which I call 'playthroughs.' I've done videos mostly on games for Nintendo consoles, but also a lot of PC games, as well as other platforms like PlayStation. I also stream on Twitch under the same username.

Thank you for taking the time to come and visit. I hope to see you around!

A Blond Ray of Sunshine

Summary: A young, upbeat Pokémon Trainer named Antoshi travels around Kanto collecting Gym Badges with his best friend and only Pokémon, Fireball the Typhlosion. When Fireball is kidnapped by Team Rocket, Antoshi unwittingly unlocks superhuman powers within him. With the discovery of these powers, and family whom he never knew before, his life starts to change dramatically as he finds out he is destined for much greater deeds.

Repository of links to Antoshi-related media and information

Retrieved from "https://fcoc-vs-battles.fandom.com/wiki/User:Antoshi?oldid=237899"
Community content is available under CC-BY-SA unless otherwise noted.