FC/OC VS Battles Wiki
Register
Don't have an account?
Sign In
Advertisement
in: Characters, Villains, Antagonists,
and 78 more 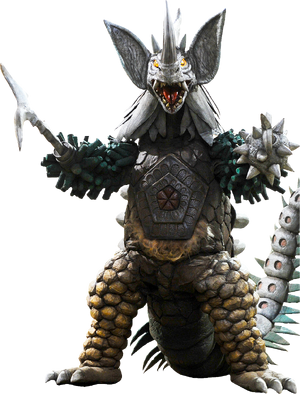 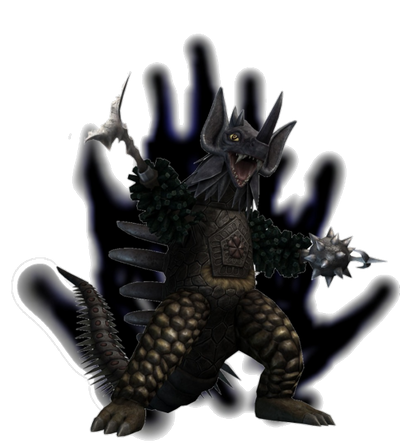 Tyrant is a major antagonist in TyranoDoom30's Fan Verse, DyranisVerse, being the main antagonist of Dark Ultimate and being one of the most deadliest and powerful monsters Godzilla has faced.

Tyrant was the combined hybrid of countless kaijus that the Ultra race have defeated across M78, that were united together by their rival, the Baltan, to defeat them. However, Tyrant was considered too powerful even for the Baltanians, due to this, he was needed to be sealed for over millions of years. after that, the Baltan race decided it was enough defeats to the Ultra race and their comnrades, and they finally decided to unleash their creation with the nickname of Ultimate Life Form, to Earth, one of the Ultras biggest hosting areas. After attacking Earth, Tyrant was needed to face off Ultraman, which he then give up a decent battle, before Ultraman could be finished, Tyrant heared a roar across the continent, that being Godzilla's, and Tyrant went for that, freeing himself out of the Baltan's control and awakening his true potential. Tyrant then fought with Godzilla, using many of his abilities in the process, however, Godzilla outsmarted him and defeated him. That was until Tyrant increased his power even further and achieved the state of EX Tyrant, being decently stronger than even Godzilla. Unfortunately, Godzilla had the Emperor's Crimson Breath which allowed him to blast Tyrant into a giant star on the 65T Cluster, exploding all of it and killing Tyrant for goof.

Tyrant is known for his opurtinistic combat sytle and brutal attacks that he performs on his opponnent, and was considered the Tyrant of Kaijus due to this when he was born. After being unleashed, he was capable of making his own personality, assuming his own free will to himself and stating that he doesn't need orders, when himself can do it.

Themes (These don't belong to me, obviously):

Superhuman Physical Characteristics, Large Size (Type 2), Flight, Telekinesis, Weapon Mastery, Skilled Combat Sytle, Natural Weaponry (Teeth, Horn and Tail), Fire Manipulation, Water Manipulation, Elasticity, Immortality (Types, 1, 2 and 3), Regeneration (High-Mid, Mid-High Overtime: Among the Kaiju DNA that was used to create Tyrant, Godzilla was included), Creation, Weather Manipulation, Summoning (Can summon invisible duplicates of himself to attack his target), Transformation (Into Awakened Mode), Berserk Mode, Breath Attack Regeneration Negation (Low-Mid), Enhanced Senses (Heard Godzilla's roar across a entire sea), Body Control (Can extend his arm size, weapon range, and more), Absorption and Power Mimicry (Capable of absorbing attacks into his stomach, which then he uses an even stronger version of it), Attack Reflection (Can create a shield which reflects projectiles), Size Manipulation (Can turn himself into human size), Earth Manipulation (Can use Earth-Based attacks), Absolute Zero (With Freezing Zero), Illusion Creation, Can attack the mind of the opponnent, Rage Power, Biological Manipulation (Passively emits a acid upon contact which contains a virus which then biologically destroys the opponent. This has even been shown working on metals, rocks and even water), Self-Transmutation (Can become a intangible pack of gas, which can makes fights harder), Non-Physical Interaction (Can interact with Ghosts of other Kaijus), Poison Manipulation and Paralysis Inducement (Can cause a toxic bite which will first paralyze and then kill the opponnent in some hours unless they do something), Stealth Mastery, Teleportation, Heat Vision, Energy Manipulation and Projection, Status Effect Inducement (Can create a giant beam of light which blinds the opponnent for 1 minute), Air Manipulation (Can creates large waves of air and also tornados), Portal Creation and Reality Warping (Capable of creating portals from another dimension which can break reality), Magnetism Manipulation (With Iron Metallic, he can attract all metallic objects around him), Statistics Amplification (Can absorb energy to become stronger), Camouflage, Explosion Manipulation, Danmaku (Capable of creating several attacks which can even cover up skies), Dimensional Travel, Pocket Reality Manipulation (Has Bemstar's abilities which includes creating a small pocket dimension inside his stomach which he can enter), Self-Sustenance (Types 1, 2 and 3), Resistance to Absolute Zero, Cosmic Radiations, Poison Manipulation, Existence Erasure, Matter Manipulation, Regeneration Negation (Low-Mid), Black Holes (Made from Godzilla's DNA)

All Previous Abilities, plus limited Invulnerability

Attack Potency: Solar System level (While not shown at his full potential, he should be comparable to the likes of Pre-Rebirth SpaceGodzilla. Considerably more powerful than an average kaiju and decently fought against Ultraman) | Multi-Solar System level (After awakening his full potential, Tyrant became the strongest he has ever been in, and considered by Ultraman himself to be too much for him and was needed Godzilla to fight him) | Multi-Solar System level+ (Over 3.3 times stronger than before. Almost invulnerable to attacks and it was needed Godzilla's strongest attack to finish him off)

Intelligence: Should be as smart as Godzilla, due to him posssessing his DNA

Standard Tactics: Tyrant will usually start with physical combat without releasing his acid cells in the process, later will use attacks made out of fire, water, air and others. and can also his powerful abilities mainly when the opponnent is taking advantage in the middle

Weaknesses: Tyrant can only absorb physical attacks. He usually don't start with fatal abilities, which means he can become more vulnerable