Turbo Mecha Sonic is one of the main antagonists of the Flash movie series Super Mario Bros Z, created by Mark Haynes (aka most known as Alvin-Earthworm).

Mecha Sonic was originally Metal Sonic, who out of all the robots meant to defeat Sonic, he was the most persistent. Eventually, he fused with all the robots to become Turbo Mecha Sonic. Eggman found out and threatened to deactivate him. Mecha Sonic simply rebelled against him and became his own master. Soon, all of Mobius was a wasteland. He fought with Sonic and his friends, easily beating him. Not even Knuckles could beat him.

Powers and Abilities: Immortality (Type 1), Superhuman Physical Characteristics, Skilled in Hand-to-Hand Combat, Energy Manipulation (Can charge his physical attacks with energy, boosting their power) Energy Projection, Aura, Flight, Very skilled with his Arm Cannons and Rocket Launchers, Extrasensory Perception (Can detect chaos energy), Teleportation, limited Elasticity (His arms can extend to great lengths), Inorganic Physiology (Is a robot), Self-Sustenance (Types 1, 2, & 3, doesn’t require any forms of sustenance), Statistics Amplification with Light-Speed Dash, likely Time Manipulation, Space-Time Manipulation, Time Stop (Said to have all of Shadow’s abilities), Possibly Dimensional Travel (Was going to teleport out of the Minus World, a completely separate world, and it was implied that the only reason it didn't work was because of the Minus World's negative energy. And although Turbo Mecha Sonic seemed to need an external source of chaos energy for this, Shadow transported objects across dimensions without an outside source, and it's likely that Mecha Sonic can as well) | All previous abilities likely enhanced, Danmaku | Superhuman Physical Characteristics, Aura, Energy Projection

Lifting Strength: At least Athletic Human (Far superior to Mario, who could carry Sonic, Shadow, and Luigi while barely conscious) | At least Class 10 (Superior to Mario)

Striking Strength: At least Mountain Class (His physical strikes could cause great harm to Mario and Sonic) | At least Large Mountain Class+ | At least Building Class+ (Could trade blows with Fire Mario)

Durability: At least Mountain Level (Flew right through the Breaker Beam unharmed, was barely phased by attacks from Mario, Sonic, and Yoshi, completely no-sold an attack from the Yellow Axem Ranger) | At least Large Mountain Level+ (Never damaged in combat, but at least equal to or superior base form, likely scales to AP) | At Least Building Level+

Stamina: High (can keep up with Mario, who carried Sonic, Shadow, and Luigi an Unknown but presumably far distance while critically injured and barely conscious)

Intelligence: Average (While in combat he displays martial arts prowess and shows a form of precognition [see Episode 6 with fight against Sonic's Team, specifically Shadow] , he will brag and allow enemies to regenerate and form escapes or strategies as he gloats)

-Energy Manipulation: Turbo Mecha Sonic can fire balls/beams of energy from his hands and chest. In his Semi-Super form he can even use a Kamehameha-like blast, and fire beams from his eye.

-Light-Speed Dash: Turbo Mecha Sonic curls into a ball and charges energy for a short duration, drastically boosting his speed.

-Chaos Control: A technique obtained from Shadow, Turbo Mecha Sonic can slow and freeze time, and teleport objects, people and himself short distances normally, and great distances and even across dimensions with an outside source of energy. 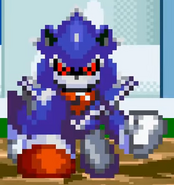