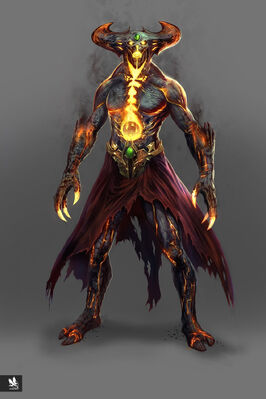 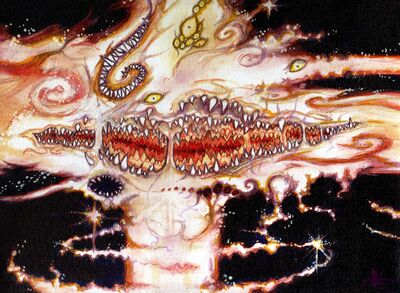 A character made by Sir Ovens. Part of the Horsemen stoyline within the Ovenverse.

Powers and Abilities: Superhuman Physical Characteristics, Regeneration (Low-Godly [Is part of Hunter Freemont, and won't die unless the former does]), Immortality (Type 1, 2 , 3, 6, 7, and 8), Disease Manipulation, Can make any matter he touches decay and rot, Energy Manipulation (Can fire energy beams that decay matter), Fire Manipulation, Electricity Manipulation, Soul Manipulation, Animal Manipulation, Shapeshifting (Can turn into a coat which Hunter wears, various animals, a humanoid, or even other people) Duplication, Body Control (Can contort his body into impossible shapes and turn any part of his body into blades or sharp spikes), Immunity to Soul Manipulation by virtue of not having a soul

Speed: Unknown | Massively FTL+ | Unknown (The Maw is capable of expanding at exponential levels, but Thorn chooses to remain stationary)

Range: A few dozen kilometres usually, Stellar through expansion | Same as before | Multi-Stellar

Intelligence: Although he is usually found abiding by the will of his master, Thorn has been shown capable of quick thinking and genuinely useful decision making when on his own. His hivemind allows him to come up with various solutions to singular problems that ultimately benefit him by providing him different perspectives.

Weaknesses: Thorn needs to feed off soul energy and pain in order to stay alive | Without Hunter near him, or actively boosting him, Thorn reverts back to his base state. | None notable

Note: The Gaping Maw and the original mass that Thorn was made from are two separate entities. The former is the 'true' body of Thorn, a hivemind shard which the latter broke off from. When Thorn reunited with the Maw, he took over as the dominant mind, and became the Maw itself.