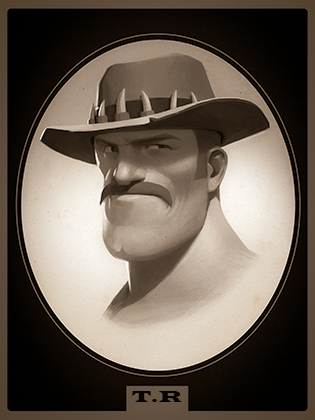 "Bully! A challenge! But where would I mount the head of a, <insert name here>?"

A history quilted in obscurity and origins misconstrued to a maze, Thomas Roads is an enigma of a man prior to his initial introduction into cosmical politics; With the only confirmable, or consistent, part of his many backstories proving to be that he is from New York.

Colloquially known as `Federal Demon` Roads, and becoming employed by equally mysterious means, acts an ambassador of the cosmical coalition The, Collective Barricade. With Roads, actively partaking in the organization's self-funded ventures in attempts to recruit foreign realities in the vigilance and protection against more cosmological threats and aberrations.

However as these meetings progressed, Road became renowned within the bureaucratic barriers of the Barricade as bombastically brutal, with passion so ardent it came to overshadow the Collective itself with his negotiations. With a ravenous refusal to take no, Thomas turned verbal violence, physical, under the most extreme of situations as he debated to mentally and physically make opponents yield upon their positions; Often retorting back against arguments simultaneously with words and punches to-

Paired with Road's fondness for combat, his moniker morphed synonymous with the preservation and simultaneous exploration of exotic ecosystems and organisms across existence. A concern for the cosmic environment that developed with the agonizing realization he would lack game to hunt during his vacations; With Road's rapidly pressing The Collective Barricade to invest in the conversation of more remote realities under the guise of an altruist.

Though the longer he maintained the façade for his self-interest, Thomas began to turn heel. Steadily legitimizing himself as an advocate of environmental protection and humanist with continual exposure to many deteriorating worlds during ambassadorial trips. Though the natural nail to his egotistical coffin proved the loss of his favored hunting grounds,the Crimson-Cross Peaks, in the aftermath of it's universe's destruction.

Solidifying a then flaccid faith in nature's protection to the point of making his entourage and a facet of The Barricade to partake in the surveillance of every reality they encountered. Indirectly amplifying the coalition's influence as they established and gained common ground with realities of like-minded intent. Collaborating with them and outright providing the essential equipment to undertake surveying runs within their biomes and regions. With Roads at the helm of a majority of expeditions, his fist and wit in dangerous duo as he journeys the multiverse. 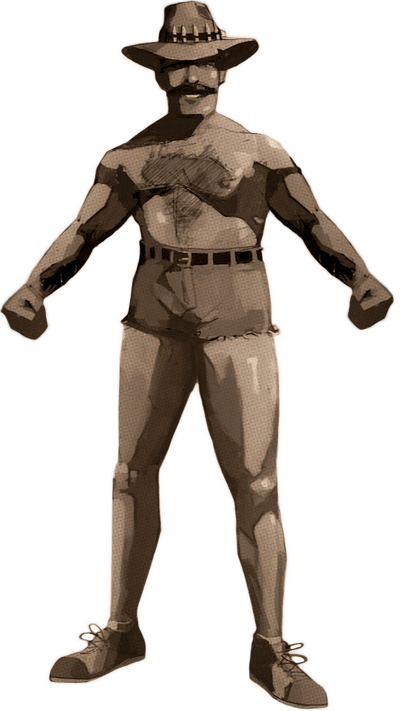 While guiding an expeditionary force through the ravaged remnants of a galaxy, Thomas came to encounter and quickly combat a Cosmic Goat on the premises; Simultaneously informing his squadron of the creature's traits and powerfully pounding upon its head until rendered unconscious with the sheer trauma of Roads raging fists. Thomas soon after capitalized on the fierce foe's incapacitated condition, and silently stripped it of its wool. Crafting an exotic sweater for himself which was donned for the remainder of the expedition.

Proved vital in counteracting the spread of a sentient infection within a remote universe. With Roads providing a portion of his blood to serve as a basis for the creation of a vaccine, with the revelation that he held a highly potent immune system with incredibly adamant antibodies. A notion that pushed Thomas to directly brawl with the living pathogen into brutal subdual as antibiotics were produced and proved accessible to the ill-ridden of the reality.

Attempted the purchase of a developing cosmic coalition in the midst of a visceral venture into Hell's demonic domains to assure the Collective Barricade a new asset; Only for Roads to have his wallet stolen by a demon. Incapable completing transaction and brim of fury with the revelation, Roads declared a war on the totality of Hell's forces that nearly expended the Barricade's funds to prolong. Though proving futile in the hopes of a long term victory with Hell's sheer scale proving unrelenting, Thomas in a spectacle during his personal war instilled Hell with the knowledge of his might; A notion that humored population to the point of Hell returning Road's wallet, days, after the conflict's conclusion.

A Broken Pelvis and A Broken Marriage

Dismantled the marriage of political opponents in order to gain ground into obtaining a contract that would ensure Thomas the rights to construct a sanctuary within a destabilizing universe. Thomas' plan commenced with the seduction of one and entered a heated debate with her over the basics of brawling in a bar to catch her attention. But Thomas quickly dashed aside the plan after he found the spunk of her spitting in his face during the argument, "Highly Attractive". Soon, entering a lengthy affair after their violent conversation and indirectly achieved his forgotten goal of dissolving his foes martial union as soon as he was caught in the act; Thomas rapidly dropped contact with his fellow infidel as soon as he gained the contract he sought.

Was quickly approached by a charity organizer while on a trek through Berlin's streets and asked to have a philosophical discussion on the meaning and intricacies of death. They sat down at a coffee shop nearby and began to talk. All went swell until the woman kept bringing up the possibility of him beating her to death, which quickly escalated into desperation. Disgusted by her lack of will to live, Thomas flicked her into a wall in front of everyone before leaving. The last words he heard from her were "that's three!", as she died from internal blood loss with a smile on her face.

It's Not You, I Just Love Me Too Much

The past was pounding load at Thomas' door, wishing to do more than mere amends to his increasing chagrin. And with its arrival, he was struck by a surprising sickness. His face began forming into a frown, an eye glowing with the glaze of a teetering tear. And with a yawn, the ambassador diagnosed himself too lazy to deal, with the ordeal. Rapidly relegating the task to a freakish four all too eager to help at the call of his cash, quickly curing his lingering lethargy as the burden of a possibly betrothed, found herself possibly beheaded.

Range: "Any range will prove viable for me to strike you".

Standard Equipment: None Notable, beyond his bare body and fist.

Intelligence: Exceptionally apt speaker paired with a dictation rivaled by few to the mythical of the multiverse with the wit and quickness of his tongue on the verbal battlefield; Carrying a caustic charisma that has shifted the tide of a multitude of decisions and debates within minor moments of Road's speaking amidst audiences of millions. Molding their minds to sway and stir to his stance with the delicate and deadly selection of his words (and at times, fists) alone. Highly heightened and steeled expertise of flora and fauna varying, with Thomas capable of visually dissecting and distinguishing from several thousands to rumored billions in organisms from a multitude of differing realties; A knack for animalistic knowledge extending to the likes of these creatures ecosystems and biomes, with Roads proving extremely proficient in the analysis of each environment down to their recurrent weather patterns and their geography.