The doubt is a angry yellow sphinx. He's a secondary antagonist of Kitty Pride.

He is the former boyfriend of Gatto.

Attack Potency: At least Wall level (Easily made a crater of about 50 centimeters in diameter in the rock)

Range: Standard Melee Range, Tens of meters with his ghosts

Ghost Summoning: Can summon ghosts if Gatto doubts something. 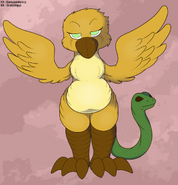