FC/OC VS Battles Wiki
Register
Don't have an account?
Sign In
Advertisement
in: Chaotic Good, Characters, Male Characters,
and 59 more 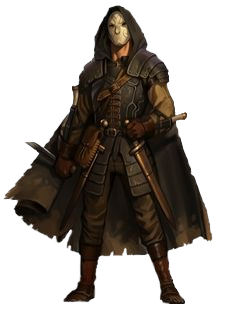 The Stranger, known by his actual name of Finnigan, is a powerful Paragon of mankind, a god-touched hero, Chosen of Myrland. He is among the rare few beings allowed to represent that god on this plane of existence.

The Stranger has dedicated his life to his task, and vicariously, to the goals of the Hunters, a sect of strange warriors mixing magic and metal to keep the beastly threat at bay. He is a talent scout of sorts, recruiting worthy adventurers in the name of the Baron of Lordran. Some such adventurers include Meck, Pinkie, and Bayhard, as well as their allies.

Upon coming to the Borderlands to find worthy candidates to recruit to Lordran's forces (as well as sure up the acquisition of the area for the Research Commission), Stranger was assigned to lead one of seven parties in the area, with his own being sent to a local goblin kingdom.

While the party dealt with most threats, Stranger focused on providing occasional support and tearing through the goblinoid forces by brute force, managing to incite a civil war by whispering sweet lies into the ears of a lieutenant to Rykx. The Stranger himself was responsible for over a hundred dead goblins by the time the small war was over.

The Stranger's appearance is heavily shrouded, keeping most skin covered and wearing a mask at all times, to the point of never eating or sleeping. His actual appearance bears resemblance to standard leather armor but with severe alterations- looking through records regarding the Stranger throughout time, it seems his clothes have varied greatly but bear the same general resemblance.

His coats are lined with items and tools, as well as his strange metallic wands and other foreign magic objects.

Stranger is sarcastic and blatantly overly confident with his abilities- he understands his importance and actively points out that others around him need him more than he would need any of them. That said, to his equals, or even those he has taken a liking to, he is overly generous and kind- to the point of giving all treasures to them and taking no rewards for his deeds.

He finds struggling amusing, if only because he enjoys the attempt. He is totally dedicated to his cause of The Hunters as it was decreed to him by Myrland himself.

Date of Birth: Unknown, at least sometime in sometime earlier than 370 AR

Affiliation: The Hunters, Followers of Myrland

Durability: Small Town level+ (Can easily tank impacts similar to those of the Desert Djinni)

Stamina: Limitless, thanks to the magic in his mask he requires no sleep, and no food, and can simply continue indefinitely as if just awoken

Range: Up to hundreds of meters with certain attacks

Intelligence: Extraordinary Genius, Finnigan is gifted with the intelligence of the gods themselves, and has access to Myrland's libraries of knowledge

Weaknesses: A limited, albeit very large, pool of spell points

Note: This character is a major NPC in an ongoing campaign. 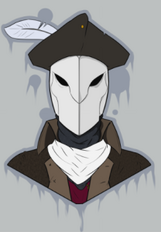 A portrait of The Stranger done by a local artist

An old picture of The Stranger, done from a past era