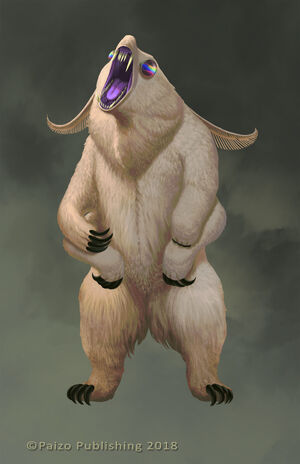 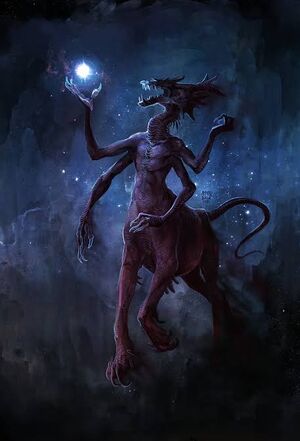 According to ancient legends, The Scrovians were once peaceful teddy bear-like creatures that once lived on the Planet of Hugopar without Wars, murders or any agressive things. until one time, a giant space creature left a part of his Skin fall on the Planet, the habitants thought that was Food then they eat it. transforming them into grotesque, centaur-like reptillians with agressive and selfish acts, they tried to stop the infection but it was too late. since then, the new empire started destroying entire stars and planets around to conquer their dream: stand up to God and achieve his power.

The Scrovians have a pretty interresting anamoty, their houses are in fact giant living beings who stomach just a giant hole, the reason they are not incomodated by the Scrovians is that they use weapons which makes the creature paralyzed for the rest of it's life unless someone un-paralyze it, for the Energy, they use food to sustain the creature so that it can create energy (just like Real Life Eletricity).

The Scrovians also have sub-species, they are similar but still sub-species:

Civilization Tier: Intergalatic Civilization (they have full control of the 4-31AL Area, a Galaxy Cluster)

Kardashev Scale: Type III (they use the entire energy of Galaxies as their power source and energy source besides the House creatures)

Age: Unknown, likely Millions of years (they are stated to have originated on their home planet when life was still on it's early days)

Population: 138 Octillion individuals (this was the number calculated by Dr. Articarus to be the total number of individuals of the species)

Same as before but better, Power Nullification (their screams can nullify the powers of the enemy if the power of said is too close), Transmutation (transformed a plant into a jar), Information Manipulation, Text Manipulation (they are able to transform the text into a book into gigantic weapons), Void Manipulation (Manipulated the Overvoid area, a area which only Void exists), Morality Manipulation via Command Stare, Soul Manipulation (some of their lunches includes souls of animals where they grab the souls of them and eat them), Telekinesis (tossed enemies around with their minds), Earth Manipulation, Law Manipulation via Reality Warping (they were able to change the very laws of the galaxy with their reality warping), Enhanced Senses (they are capable of smelling/hearing things from a very large distance, even from 20 kilometers away), Absolute Zero (they were able to cover a entire planet with temperatures lower than -300.17*C), Stealth Mastery, Weapon Mastery, Darkness Manipulation (they are able to control shadows), Acausality (Type 3), BFR (they were able to change the reality from a grass mountain to a world full of lava), Water Walking, Probability Manipulation (are able to change what was supposed to be unlikely, to be likely. that was winning against the Gyajukos during the First Multi-Planetary War), Forcefield Creation (they have the ability to release a gas which acts as a forcefield)

same as before but superior, Illusion Manipulation (Gujuradads are able to create ilussions of themselves), Biological Manipulation (they manipulated the biology of a planet so that all the creatures of a enemy empire turned against their owners), Paralysis Inducement

all previous abilities better than before plus Existence Erasure (the Kulakars are able to erase various Galaxies in the universe) and the ability to touch Non-Phsyical and Abstract Entities (Type 2; they could touch Huitu, who's is abstract from the Main Universe)

Matter Manipulation (normal fire guns are able to destroy molecules), Soul Manipulation (when using it's maximum power, the "Blaster Souless" weapon can severly damage the soul of it's foe), Reality Warping (the Eclipse Solar Destroyer after destroying a Star, was able to cause a small rip in space-time), Energy Projection, Energy Manipulation, Heat Manipulation, Fate Manipulation (the Futurer blaster changed the fate of Juops, which was going to die from a dangerous virus), Gravity Manipulation (warping Gravity around is a common capability of their weapons) and Acid Manipulation

Soul Manipulation (every race is able to resist soul destruction thanks to their previous forms before the infection as their hearts and Souls were "Good"), Reality Warping (are completely unnafected by rips in reality), Mind Manipulation (they were one of the races that survived Cavolor's use of his Mind Manipulation, which effected multiple universes), Transmutation and Matter Manipulation (during a experiment, a individual was not transformed into a pie by Clownvar), Resistance Negation and Durability Negation (are capable of surviving the Dakr pitness of despair, a location where their resistances are negated and their durability is ignored), Empathic and Morality Manipulation (they were unnafected by Cavolor's use of his empathic manipulation and morality manipulation to make all empires in the galaxy bow before him), Absorption (each member of the species are unnafected by their own uses of their absorption on themselves), Power Nullification (a average member was fine after Necroas use of his Nullification), Pain Manipulation (their original state was immune to pain as they were good inside, now it's even superior)

Attack Potency: Mountain Level (annually during their Sanctuary day; they casually splitted clouds) Country Level physically (They are some of the most feared empires in the entire galatic quadrant of the universe and are able to destroy entire cities. are able to create earthquakes this powerful with their strength alone) Planet Level with weapons (their weapons are comparable to each other. which includes the Far-light X90, which destroyed a Asteroid of this power) Dwarf Star Level physically, Higher with weapons (they completely obliterated the Kujmonlur's Moon and their weapons should be comparable to it) Multi-Solar System Level phsyically (even a fodder Gujuradad was able to create a black hole which then exploded and caused a rip in space-time that consumed and destroyed hundreds of stars on it's way) Galaxy Level with the Ultimatum Killer (the Ultimatum Killer was able to casually destroy a Galaxy) Multiverse Level (they defeated the Clock Menace, which was able to destroy multiple timelines at once. these timelines -different from the main timeline- contains over 400 million universes each) Hyperverse Level (Jkotan transcended his own species and fused with the Hyperoverloader, a dimensional structure containing over 230,000 dimensions)

Speed: Massively Hypersonic+ (they were able to casually dodge lighting bolts) Sub-Relativistic with Massively FTL attack speed (are able to run over a Earth-sized Planet in seconds. their weapons intercepted light beams) FTL, Massively FTL with weapons (their speed is superior to light according to Dr. Articarus, one of the main researchers of the species. their weapons should be at least superior to the Scoders's weapons) Massively FTL+ (their attacks were able to get into multiple solar systems in seconds. capable of intergalatic travel at these speeds) Massively FTL+ (Kulakars are far faster than Gujuradads) Immeasurable (upon absorbing the Hyperoverloader, Jkotan transcended time and is able to fly between the past, future and present)

Lifting Strength: Regular Human (are capable of lifting dog-sized animals with regular ease) | Class K (can easily throw around large animals and ships with massive weight) | Class G (lifted a Mountain-sized fortress with no much difficulty) | Class Z (Lokur-shar, a Gujuradad, was able to hold a Titan-sized Moon from colliding from a planet with his hand) | Class Z (stronger than before) | immeasurable

Power Source: the Galatic Core of their Homeworld Galaxy is a great energy source for their weapons such as the Ultimatum Killer and many of their other weapons. they also have the Life Drainer which absorbs the life force of planets to serve as Energy for them

Industrial Capacity: their industries are very advanced as they are capable of creating various objects with advanced technology in a short time and without much difficulty

Military Prowess: they are capable of taking over entire sectors of a Galaxy in days thanks to their powerful weapons and brute strength

Weaknesses: extremely hot temperatures after 400*C may make them rather slow

Retrieved from "https://fcoc-vs-battles.fandom.com/wiki/The_Scrovians?oldid=311523"
Community content is available under CC-BY-SA unless otherwise noted.