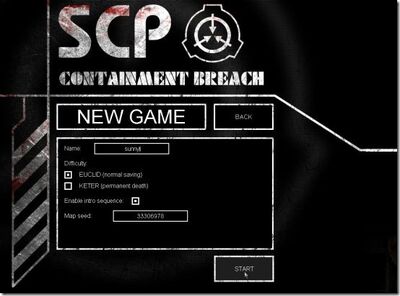 Benjamin Oliver Walker, aka D-9341, is the main protagonist of the game SCP: Containment Breach. A former Level 4 Senior Researcher in the Foundation, Walker was demoted to D Class and had his mind wiped after committing unauthorized research of a hypothetical anomalous phenomenon; the Spiral Gestalt. Walker's ability to "respawn" after his death is due to success of the research of this phenomenon. A disciplinary hearing was conducted, after which Walker was stripped of his clearance and was put on death row as D-9341.

Speed: Normal Human, Below Average Human with SCP-714 (Causes the wearer to become extremely sluggish and slows there reactions by a large amount) | Immeasurable (Completely transcendent of space-time), likely Omnipresent (Can travel in and out of the timelines they create at will)

Durability: Human level (Is physically no different from a normal human, as he can easily be killed by weaker SCPs such as SCP-049 and SCP-173 and can be shot to death with standard issue firearms), Street level with Ballistic Vest (Can protect from gunfire, though this still causes minor damage) Immorality make him extremely hard to kill | Multiverse level+, possibly High Multiverse level+

Stamina: Average, Low when using SCP-714 and the Ballistic Vest, High with the Gas Mask and the Hazmat Suit | Limitless

Key: Walker | With the Spiral Gestalt

Connor (Confinement) Connor's Profile (Note: The Walker was used. Both had access to their full range of equipment)

Start a Discussion Discussions about The Player (SCP Containment Breach)