FC/OC VS Battles Wiki
Register
Don't have an account?
Sign In
Advertisement
in: Characters, Fan Characters, Male Characters,
and 22 more 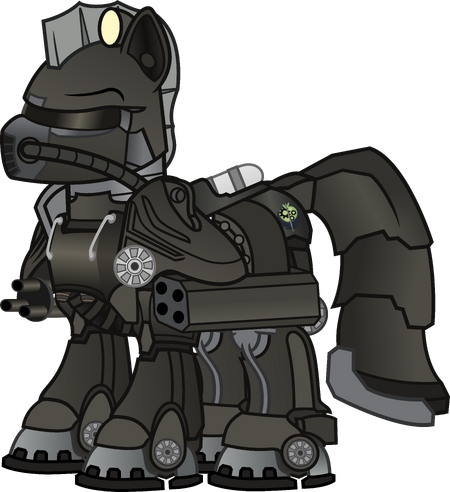 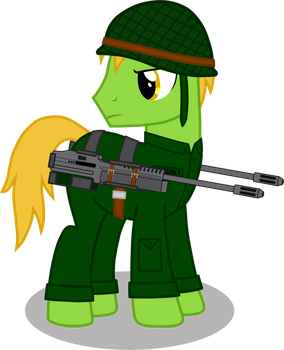 The Great Equestrian War, a schism in Equestrian history saw the rise of great heroes on battlefield and on the home front, regular nameless ponies enlisted to fight for their princesses great and noble cause against the evil Zebra scum. Many of these brave soldiers entered the line of battle never return but a few found select super stardom success, the most Prominent of which was Apple Snack.

Born to a life of unknowns in apple country before the war Apple Snack would soon find his calling in the line of battle, being amongnst the most awarded and respected soldiers Equestria had at their disposal, he was so highly rated in fact he was allowed to served under Big Macintosh himself, Applejack's big brother.

It was at this point Apple Snack fell in love, found happiness and real purpose for all this fighting, in Applejack. In fact this was why he was first chosen for the Prototype Steel Ranger suits, a full suit of armor that generally turned its wearer into a magical walking talking tank. However near the very end of the war things started to look bleak his relationship with Applejack started to wain, world stability was crumbling, the end was coming, and he knew it. Apple Snack knowing the end was coming tried his best to see his lover before the end would come, however he had found out that she had been allowed permission to enter a stable for refuge, the apple stable, Stable 2. While he was not selected, Apple Snack chased out of Canterlot frantically trying to catch up thinking Applejack must've hated him, in reality however, she was pregnant, and wanted to carry on their lineage well into the future as safely as she could. But it was too late, when he reached the outskirts the bombs had started to drop, Apple Snack solemnly stood there in his armor amidst the hellfire, waiting to be engulfed and judged for all the lives he had taken, for Apple Snack to be no more.

However, that didn't technically happen. When he came to he was still in his armor, amid the hellish desolate wasteland of Equestria. Apple Snack had become a Ghoul, a walking radioactive zombie. He still however maintained his sanity unlike most Ghouls, whatever was left of it at this point. feeling his old life was completely gone "Steelhooves" joined up with the remnant Steel Rangers for next few decades, working as loner for the faction as he lived in the home he once shared with Applejack.

200 years after the bombs a Stable Dweller would emerge from Stable 2, one that upon meeting Steelhooves reminded him of why Applejack meant so much to him. No matter how hard a struggle she would have to face, she would always try to do the right thing, that pony was Littlepip. Steelhooves realizing how important she would be in reshaping the wasteland, joined her on her quest, to continue to follow her and Applejacks mantra.

Steelhooves in the present is a ghoul trapped in Steel Ranger armor. As such he is always seen with it. He is very menacing at times because of this and its difficult to periodically pick up on his emotions because of how deadpan he can be. He is very loyal to tradition and code, being the very first Steel Ranger and one of groups founders. He initially put the group above the needs of those around him at times. However his time with Littlepip's group and the discovery that Littlepip and Velvet Remedy are his great descendants started to change his outlook on the rangers current state and question whether or not the rangers including himself stuck true to Applejack's wishes. It was when the rangers deliberately attacked Littlepip/Applejacks stable for their technology and slaughtered the defenseless inhabitants that he had a massive change of heart and conscious and once he helped defend the stable with his friends he encouraged other deserters to follow him in remembering Applejacks ambition.

Steelhooves is a very cunning and intelligent pony however, and he has little qualms about breaking any sense of moral code should he feel the ends are justified.

Origin: Fallout Equestria by Kkat a My Little Pony/Fallout Fanfiction

Gender: Male, however it's likely he has since lost the ability to procreate due to his current status.

Age: Unknown At least 200 years old, possibly over 240 (Was of similar age to the Mane 6 who were well past their prime and showing signs of advanced aging before the Apocalypse)

Likes: Littlepip (10th Generation Great Grand Daughter, views her as a valuable moral compass similar to how he viewed Applejack.), Velvet Remedy (10th Generation Great Grand Daughter.), Calamity (Friendly Rival), Xenith (His relationship with Xenith was tumultuous at best until Littlepip forced him to see past his instilled past regarding Zebras.), Ditzy Doo, Technology, Order, Competing with Calamity.

Dislikes: Formerly Zebras however Littlepip and Xenith help him get past this, people who discriminate against sane ghouls, those who would harm and bully the weak, Red Eye, The Goddess, Steel Rangers (For attacking Littlepip/Applejacks stable after sending Pip on a suicide mission.).

Marital Status: Widowed Engagie (The day Applejack was gonna accept his proposal and tell him she was pregnant was the day the world ended. neither would go on to love again. She would later give birth to their children in Stable 2, making Littlepip and Velvet Remedy his biological decedents.)

Powers and Abilities: Superhuman Physical Characteristics, Immortality (Types 1, 2, 3, 7, and 8, Canterlot Ghouls do not age. Survived having his torso blown off and later regenerated, reliant on his suit for survival), Genius Intelligence, Skilled Hand to Hand Combatant (Trained in the Military, Some of Equestrias best fighters had trouble with him in unarmed fights), Weapon Mastery, Enhanced Physiology (Is fused with his suit, Canterlot Ghouls are well regarded for their immense strength), Explosives Expert, Hacking (Should be as capable as Littlepip, helped her through disarming a bomb.), Regeneration (Low Mid, regenerated his torso after it was torn off by an Anti Tank round, armor included. possibly Mid, scaling from what other ghouls can do.), Partial Inorganic Physiology (He is fused to his suit which has since replaced a number of his organic functions, as well as granting certain resistances.) High Resistance to: Radiation, Various Pink Cloud related effects including Biological Manipulation, Matter Manipulation (Pink Cloud is substance that under prolonged exposure can meld objects and living things together, is capable of fusing streams of water into ribbons), and Sound Manipulation (Immune to Broadcasters, which project noise at a frequency capable of killing creatures in seconds.). Via his suit: Extremely Minor Technology Manipulation (His armor can self repair itself), Minor Magic (Suit is capable of casting basic targeting and weapon spells for him.) Homing Attack, Perception Manipulation (can slow his perception of time to a stand still via EFS), Enhanced Senses (via his suit's EFS and SATS), Extrasensory Perception (Can detect threats from Kilometers away, determine their intent, and how strong they are), Statistics Amplification

Speed: Subsonic, with Massively Hypersonic reactions (Notably the slowest of Littlepips friends because of his armor.) Higher when using SATS (Slows the users perception of time to a stand still.)

Durability: Building Level (Should be superior to Littlepip, His armor can withstand pressure point strikes from trained Zebras, who can break other Steel Ranger armor, Had his torso blown off by an Anti Tank round and survived.)

Stamina: Extremely High (Ghouls do not need to eat or sleep.)

Intelligence: Extremely Gifted possibly Genius, while he considers his great descendant smarter than him and actively looked up to her even, Steelhooves is by far at least the second smartest on the team, being able to hack computers on a level of if not superior to Littlepip. He also has far more battle experience than anyone else in Littlepips gang due in part to his age. He was the oldest acting Ranger, Steel or Apple at the time of his death and was among one of the highest ranked. Later on in the story he defects from the Steel Rangers and forms his own group known as Applejacks Rangers, leading and commanding several operations/networks during his time away from Littlepips group. Also like his descendant he is a known trickster, and has successfully lied to and swindled numerous individuals to get whatever it is he desires.

Weaknesses: Cannot Survive without his suit, EMPs or Sufficient Damage will disable his suit over time. SATS needs seconds to recharge between uses. EFS does not inform its users what kind of life it finds and has trouble with elevation. Battle Saddle weapons must be switched out manually.

Respect Thread on him and Littlepips other friends: Link

Blog post on Steelhooves and the Verses Tiering: Link