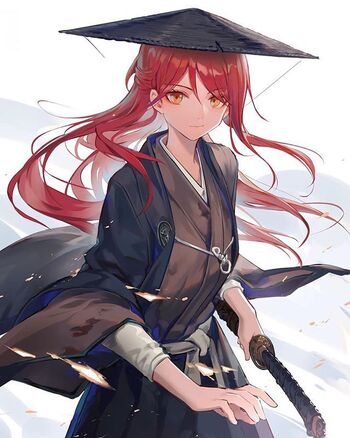 Ryuka is a character from the 5th timeline of Everybody Wants to Rule the World. She seeks to surpass the title of "strongest swordsman", and as such, finds herself compelled to seek out and battle with powerful sword wielding foes. This in turn led her to challenge the master samurai, Tset to a fight within seconds of meeting him. After learning his name, Ryuka theorized that this Tset must somehow be related to the ancient wandering swordsman of the same name from her previous world.

Dislikes: Being made fun of or looked down on, Cheaters

Tier: 9-B, far higher with Anubis and with summoning

Powers and Abilities: Superhuman Physical Characteristics, Genius Intelligence, Flight, Danmaku, Martial Arts, Master Swordswoman (Was known as "one of the best" in her previous world, and has gained hundreds of thousands of years worth of experience and complementary skill since arriving), Accelerated Development (Is able to absorb knowledge and master new abilities nigh-instantaneously), Enhanced Senses (Has smell superior to a dog's along with the standard senses of a Pillar Man. Can smell death), Immortality (Types 1 and 2; Can survive after being reduced to just a nervous system), Power Mimicry (Developed her own version of Xiao Lee after seeing Tset perform it once), Body Control (Like vampires, Pillar Men can easily control their physiology; Santana, a weaker and less evolved Pillar Man, was capable of controlling his own skeletal structure. Can make her body completely limp and flow like a blade of grass in a storm to reduce damage with Xiao Lee. Can make herself massless), Adaptation (Remembers all attacks used against her and knows how to counter them), Reactive Power Level (Gets stronger and faster with every swing of her weapon), Selective Intangibility (Anubis can cut through tangible materials without harming them), Durability Negation (Can target internal organs directly with intangibility), Weather Manipulation, Summoning (Can summon gods to obtain various abilities, such as Transmutation, Energy Manipulation, Fire Manipulation, Light Manipulation, Purification, and Attack Reflection; can be possessed by gods to increase her statistics), Non-Physical Interaction (Can harm Phantoms and Evil Spirits with her regular attacks), Dimensional Travel (Can break through Otherworlds), Possession (If reduced to a nervous system, Ryuka should be able to invade a person's body to control them. Anubis can override the minds of others), Power Bestowal (Can turn others into vampires with the Stone Mask), Resistance to Mind Manipulation (Lunarians are immune the effects of the true Moon, which can drive humans insane and kill them if they look at it), Probability Manipulation (Ryuka has so much fortune that it cannot be reduced) and Fear Manipulation (Managed to convert her own fear caused by Tset's aura into excitement)

Attack Potency: Wall level+ (Started out comparable to the others and has since doubled her capabilities), far higher with Anubis and with summoning

Speed: Superhuman with Subsonic reactions and combat speed (Can move and attack faster than the human eye can track), FTL travel and attack speed with masslessness and Light-speed Slash respectively.

Stamina: Extremely high. Hypothetically capable of engaging in dozens of millions of battles in a row.

Range: Extended melee range, at least Tens of Meters with Danmaku, much further with certain abilities.

Standard Equipment: Anubis and The Sword of Lord Gion

Intelligence: Supergenius. Holds the experience and intellect of one who should have lived for hundreds of thousands of years despite her young age. As a Pillar Man, Ryuka possesses an exceptional capacity for intelligence and learning above that of any regular human, allowing her to grasp complex machinery and technology within seconds and learn new languages nearly just as quickly. She is able to master new abilities and techniques flawlessly after trying them for the first time, and was able to create her own version of Tset's Xiao-Lee after only seeing it once. Deduced that her body was weak to sunlight despite never having come into contact with it. Light-speed slash requires her to calculate her own position along with her target's, the spot and angle at which she'll hit them, as well as her landing coordinates simultaneously, a process she trained to the point that she makes such calculations passively in the heat of battle, leaving any and all available routes clear to her. Capable of creating Stone Masks.

Weaknesses: Ryuka will be turned to stone by overexposure to sunlight. She can only move in a straight line while massless.

Light-speed Slash: After making herself massless, Ryuka calculates her trajectory and landing position and runs her sword through her opponent at speeds surpassing that of light itself. Since this move is in reality simply just Ryuka running through the opponent while holding her sword, she's hesitant to call it an actual technique.

Anubis Quill Mode: By Taking advantage of Anubis' intangibility, Ryuka can take him into her own body and wield him from within by controlling her internal organs, bones and muscles. Due to the pure absurdity of this fighting style, coupled with her weapon being completely obscured from her opponent, Anubis' attacks can become effectively impossible to predict. On top of this, Ryuka can still wield The Sword of Lord Gion and other weapons to fight as she would normally.

Alternate Xiao Lee: A technique developed by Ryuka after witnessing the original performed by Tset during their battle. Ryuka makes her body go completely limp, causing it to move like a blade of grass in a storm. This allows her to harmlessy absorb and redirect damage received from attacks. Ryuka's version utilizes her control over her own Pillar Man physiology to maximize these effects.

Blade Danmaku: Ryuka's danmaku is a storm of slashes sent from her sword, which mercilessly rains down on her opponent(s) with unrelenting force. As it is constantly changing and adapting, it has no discernible pattern.

Weather Manipulation: Ryuka can control the weather, allowing her to summon rain and lighting.

Summoning: Ryuka can channel the power of the gods and use them for herself, invoking the powerful deities of the moon.

Retrieved from "https://fcoc-vs-battles.fandom.com/wiki/Soryūshi_Ryuka?oldid=222438"
Community content is available under CC-BY-SA unless otherwise noted.