FC/OC VS Battles Wiki
Register
Don't have an account?
Sign In
in: Characters, Male Characters, Immortals,
and 56 more 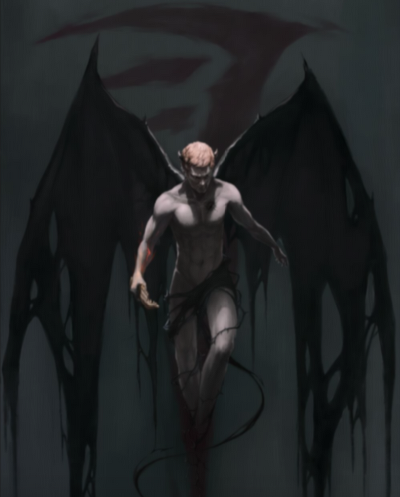 Satan is a fallen angel and the ruler of Hell. He was once the most powerful and beautiful of all the angels of Yahweh, but his pride and jealousy led him to envy his Creator's position, and he sought to kill Him and assume lord-ship of all Creation. He led a rebellion against Heaven, but his forces were routed and defeated, resulting in his banishment to the dimension that would one day be known as Hell.

Commiting everything in his power to spite Yahweh and cause Him pain to enact a sense of revenge, he corrupted the first humans and created the beings called demons. One of which, The Red Queen, created the monsters that inspired myth and folklore including Vampires, Werewolves, and Wendigoes.

He once met Cole MacGrath on his journey through the Afterlife, and sought to damn Lucy Kuo's soul to Hell, but was foiled by the Patron Saint. He also has brief encounters with the demon hunter Ignatius after exorsizing one of his demons.

Gender: Inapplicable. Appears and is referred to as Male.

Attack Potency: At least Low Complex Multiverse level (Angels are transcendent beings who are unbound by dimensions and space and time itself. Stated to be able to destroy all Creation with a snap of his fingers. Far above the likes of the Ray Force, a 5-dimensional energy force that binds the Multiverse)

Weaknesses: Extremely inflated ego and sense of pride. Despite his great wisdom and nigh-omniscience, his pride and overconfidence deluded himself into believing he could defeat The Creator.