FC/OC VS Battles Wiki
Register
Don't have an account?
Sign In
Advertisement
in: Antagonists, Blood Users, Characters,
and 23 more

Remilia Scarlet is the main antagonist of the Castlevania-inspired Touhou Fangames, Koumajou Densetsu (紅魔城伝説; Legend of the Scarlet Devil Castle). She is a Vampire Lady, being the mistress of Sakuya Izayoi and Hong Meiling, the elder sister of Flandre Scarlet, and a close friend of the witch Patchouli Knowledge. She is childish, spoiled and arrogant, but also elegant and refined. Despite her appearance, she is a vampire, and as such one of the most powerful and threatening Youkai in Gensokyo. Throughout the games, she abandons the Scarlet Devil Mansion and replaces it with the Scarlet Devil Castle, declaring herself its Demon Lady.

Powers and Abilities: Superhuman Physical Characteristics, Flight, Magic, Blood Manipulation, Fate Manipulation, Immortality (Types 1 and 3), Regeneration (High-Mid; can regenerate from just her head), Transformation (Can transform into a flock of bats or a cloud of mist), Summoning (can summon and control devils), Weather Manipulation (Can release the Scarlet Mist), Danmaku, Energy Manipulation | Life & Death Manipulation (Absorbed the Saigyou Ayakashi, stated to have "United the Boundary Between Life & Death" by Yukari, and gained the power to exist in a state of living death)

Attack Potency: Large Star level (Above both Sakuya and Patchouli. Stated to be the vampire from the Vampire Incident, who needed several of the strongest youkai in Gensokyo to defeat her, before the Spell Cards Rule was created. Matched Reimu and Marisa) | At least Large Star level, likely higher (Absorbed the power of an incomplete Saigyou Ayakashi, which had been empowered by the energies liberated by the battles Sakuya Izayoi had with Alice Margatroid, Chen, Youmu Konpaku, Marisa Kirisame, Reimu Hakurei, Ran Yakumo and Yuyuko Saigyouji, as well as the fights some of them had previously had with Hong Meiling and Patchouli Knowledge)

Lifting Strength: At least Class 25 (Vampires are said to be able to uproot thousand-year old trees).

Range: Many Kilometers with Scarlet Mist | Small Country level (Extends to all of Gensokyo)

Intelligence: Remilia is cunning, perceptive, and intelligent, having amassed knowledge and wisdom over 500 years. She is also extremely charismatic and quickly picked up on Yukari manipulating her during her trip to the Moon.

Weaknesses: Remilia is burnt when exposed to sunlight or roasted soybeans, she can neither cross flowing water nor approach a broken holly branch or the head of a sardine. She is also incredibly overconfident. | Became corrupted by the Saigyou's Ayakashi's evil nature and cannot fully control her power 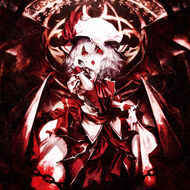