View source
This page's content has been marked as 18+.
This page contains sexual or otherwise graphic content that some may find disturbing and that should only be viewed by those over 18 years of age. If you are under 18, you shouldn't be viewing this page.
WARNING THIS PAGE CONTAINS MASSIVE SPOILERS FOR FALLOUT EQUESTRIA: PROJECT HORIZONS! 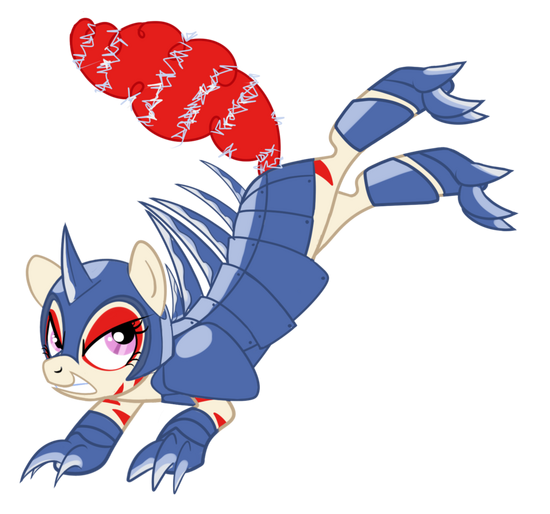 Project Eternity was a top secret confidential endeavor by Rarity to use the Soul Binding Magic of the temptatious Black Book to bind organic matter to a eternal state. Their result was the First Phoenix Talisman, supposedly able to reform a pony from any injury back their old self. A requirement however was that of the soul of another, another life was needed to be wisked away in order for the stasis to truly take effect.

The first test recipient was Police Officer Softheart, who was mortally wounded while apprehending a child serial killer, The Angel of Death. Death was chosen as the talismans sacrifice for her crimes, on orders from above, and operation to save Softheart was seemingly a success. But this success was short lived; as it turns out, bits and pieces of the Angel's soul was leaking out of the talisman, fighting for control and constantly torturing the officer with threats of killing her family. Unable to fight off the demonic killers intent, Softheart threw herself in front of a train, desperate to find a means to end her own life. it completely destroyed her body but her soul lived on, trapped with in the confines of the talisman and whoever wore it.

Since then the talisman had mysteriously traveled around from user to user, almost as if it was seemingly sentient, and hunting down prey to torment. Thieves, Doctors, Martial Artists, all fell victim its allure and power. It was when the Zebra Martial Artist Shuuja transferred the Talisman to her best friend Twist does our story creep towards its conclusion. On the last day before the Apocalypse Twist, and her filly daughter Peppermint were stationed at Miramare a Military Base for Equestria's elite. The base was swarmed and despite taking down a Zebra on her own, Peppermint was mortally wounded. And in a last ditch effort to save her daughter from the Appocalypse, Twist transferred the Talisman to its final recipient as the world exploded into white.

150 Years Later in the cratered remains of Miramare, a lone amnesiac filly emerged from the decaying wasteland rubble. This filly would be found by sentient ghouls and sold into slavery, intrigued by the fillies strange anomaly. Eventually as she grew old enough and realized she can survive decapitation, the filly escaped, and found herself in the care of Dr.Zodiac who bequeathed her the name Aristotle. Aristotle some odd years later fell in love with a colt she was willing to settle down with, Priest. Together they built Star House, a Star decorated house wherein they hoped to raise their children and live a quiet life in the wasteland. A rarity that the Phoenix Talisman would not afford Aristotle, The Angel of Death violently resurged for control some odd years as the souls of the Talisman further drove Aristotle into violent mood swings. Eventually The Angel won out, and as Aristotle recovered from her black out she starred horrified a the choked corpse of her own child...that she had killed. Unable to come to terms with her life, she ran away from Priest. Grief stricken she looked and looked for the most dangerous things she could find that would kill her unable to live among those she could come to love. Eventually she ran into a mare named Rampage, a member of a gang called the Reapers, who proudly proclaimed she could kill the runaway mare effortlessly. All for naught however as the now once again nameless runaway mare, killed her would be attacker without any kind of effort. Remorseful for the mare who tried doing her a favor, the nameless mare assumed the name Rampage and began working directly under the Reapers leader Big Daddy.

Years later, while working as a Reaper, she was personally requested to monitor the upstart Stable pony "Security" who in addition to humiliating fellow Reaper Deus, was christened with the highest known bounty for a head in the recorded history of the wasteland. It was then a curious thought entered Rampage's conscious "If I stick around with her, I might actually die!".

Rampage is a Earth pony with a white coat tattered with red zebra like stripes and a red mane. She wears Hoofclaw armor that is strong enough to pierce Steel Ranger armor. Her cutie mark acts as a sort of indicator for which soul is currently in control of Rampage's body or is influencing her.

Note: Only covering Rampage's default personality as basic assumptions can be made about the other souls.

Rampage is suicidally outgoing, apart from her own issues she seeks adventure by whatever means possible and will go out of her way to experience anything that can kill her for good. On the inside however, Rampage is a broken mare, haunted by the demons within her, and her lack of control. The fear and mental anguish of potentially killing another loved one in psychotic episode has lead her to live the lifestyle of a loner. In light of this however, she has been able to put faith in Blackjack's group. If not for finding death but doing so in a way, that can maybe help others.

Between the rest of her personalities, there is very little to go off of due to the brevity of their appearances. All but one of them, can be understood with basic presumptions about their characters. Many of the personalities at least by Project Horizons have become aware of their fates and current status as prisoners. If they are not manifesting as Rampage's host, they will often try to suppress the presence of more malevolent entities within the Talisman from gaining control. Shuuja, Twist, Octopus, Softheart, and Razorwire are the only known souls inhabiting Rampage's Talisman by the final chapters of Project Horizons.

Age: 200s chronologically, however she has only been conscious for around 50 years. Her body is perpetually stuck in its Physical 30s and can change depending on how taxed her regeneration is.

Dislikes: Her inability to control the souls within her, The Angel of Death (Child Serial killer whose soul was formerly bound to Rampage's Phoenix Talisman.), memories of the daughter she killed while possessed by the Angel of Death, Cognitum, Legate Vitosius, Occasionally P-21

Former Affiliations: Cognitum, Legate Vitosius, "The Dealer" (Echo), and Steel Rain (Aligned with them briefly as the Angel of Death grew in influence over her conscience, to the point where she willingly ambushed Blackjack and Co. when they arrived on the Moon to stop Cognitums plans.)

Powers and Abilities: Superhuman Physical Characteristics, Minor Magic, Immortality (Types 1, and 3), Regeneration (Mid-High, from her Phoenix Talisman, comparable to Legate who regenerated from being at the epicenter of a nuclear strike. Regenerated after being disintegrated.), Self-Sustenance (Type 1, Survived without oxygen on the moon for over 200 years.), Minor Age Manipulation (Upon regenerating as a child she will rapidly age physically to her 30s in a weeks time, then stay at that age.), Master Martial Artist, Social Influencing, Acrobatics, and Multiple Personalities. Resistant to: Age Manipulation, Poison Manipulation (Impossible for her to feel any negative after effects of drugs she consumes.), Cosmic Radiations (Survived in space for over 200 years.), and Extreme Colds

Stamina: Extremely High (Stayed conscious for hours as her heart was repeatedly ripped out and reformed. Remained fully conscious when she threw herself into a wood chipper in a failed suicide attempt. Stayed conscious alongside Blackjack when the later ejected the both of them into space, and later after being left on the moon she hibernated and was able to survive on the moon for over 200 years before her talisman gave out.)

Intelligence: Gifted normally Rampage's time exploring the wasteland has left her with a lot of experience, which often has given her the leg up on her opponent. However her preferred tactic of straight brawling lends her to be predictable at times. Varies for other personalities, however most would at least be Extremely Gifted due to their fields in their previous lives (Has the souls of a Psychologist, Martial Artist, Soldier, and a Police officer bounded to her.).

Weaknesses: Can be forced to switch out to other personalities should certain conditions be met. Souls are vulnerable to Soul Based attacks and even being their presence will cause Rampage to rapidly switch between hosts or even have two or more souls controlling her at once. Previously the Angel of Death would violently attack anyone however since the Angel of Death has been killed this is no longer the case. If Rampages regeneration is pushed to its absolute limit she will reform in her younger body and age back to normal in a weeks time. Her regeneration can also be obstructed by certain objects such as grates, prolonging the time it would take for her to reform or even trapping her if she is unable to break the object in question. As a result of her imperfect regeneration she is forced to remove foreign objects such as bullets upon regenerating.