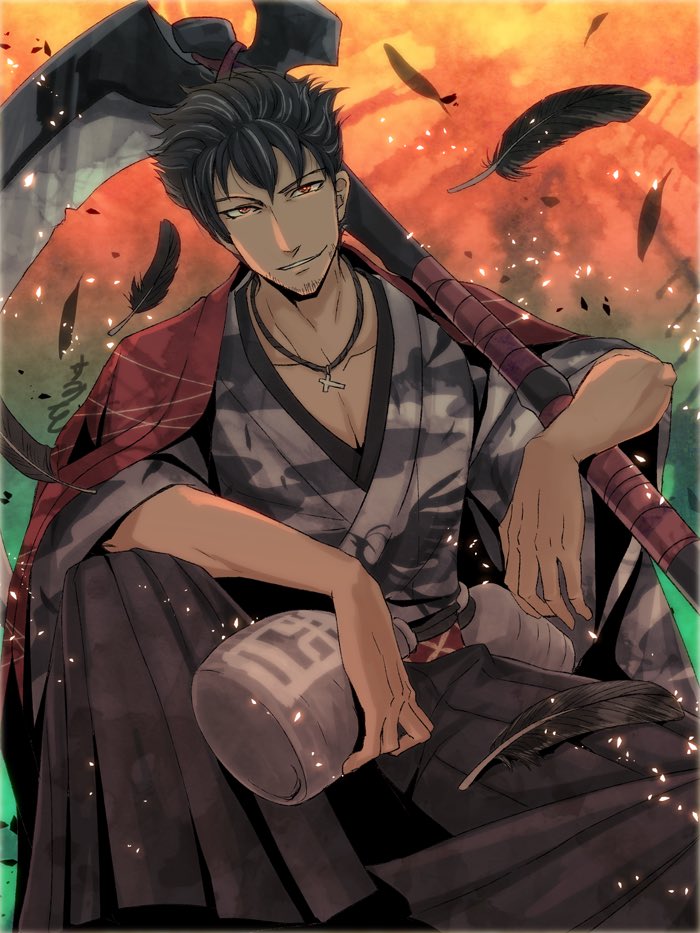 Art is made by the amazing Sumiwow

Qrow Branwen is the #2 S-Class Hero, Silver Reaper. As such he is treated as the top class hero of Vale, being next to the #1 Winter Qrow, SS Class Gilgamesh, Eggman, and Grandmaster Reigen. Not only that, he's one of the few who immediately saw Yang's power and is the one that trained Adam Taurus.

A master swordsman and a master at scythe and shooting too, Qrow remains a solid pillar to the Heroes Association. After all, only certain few can take out Dragon Class monsters, much less actually clash with Overlord Class ones. This is due to his unique Branwen style swordplay, The Colors of the Wilting World Sword Style that's only known to tengus. As he's the only one left to know that sword style in Vale, he is currently maintaining his own small dojo and teaching his young pupil Youmu Konpaku.

Regularly gets drunk and is initially not the type of person you'd expect a Hero. In fact, it's a common thing to know that an S-class Hero meeting isn't an S-Class Hero meeting if Qrow is in there and is Sober. He's easygoing and laidback, never taking things seriously when the situation is something he deemed light enough. He can make jokes in meeting and often makes fun of others lightheartedly.

He is also a ladies man and a perv. Notable for charming many bartenders to those he goes to. Even for such an old guy, he has the charm still set for him. It's not something that works for everyone but rather his experience regarding people is also extensive. To the point that he finds it no trouble to flirt with others mostly due to relationships not lasting for him due to his unnatural misfortune. It's what irks Winter but at the same time irks him on the two's relationship. On another note Youmu is annoyed by it but at the same time has noticed his optimistic side when flirting despite the often negative consequences of doing so, whether be it an unlucky random event or so. Noticeably he's hard on Youmu making her always do difficult tasks for the focus on training.

However, he is one of the most rational and collected S-rankers if the situation calls for it. Notice how at the face of danger Qrow is casually and doesn't think much of his enemy? It doesn't happen when faced with opponents of a higher caliber and are certain threats. It's not underestimating but rather awareness of the true gap between him and an opponent. Qrow is experienced and knows when to get serious and can immediately pick the best action to do. Though his Semblance has made him dislike working in tandem with others, he is willing to work those who can take his misfortune inducing presence. Noticeably Qrow despises those who take advantage of others or can be deemed too ruthless, despite being once called out by Yang for it.

Marital Status: Single, soon to be married to Winter

Attack Potency: At least City level (Easily one-shots regular Demon Class monsters. Casually diverted one of the many tidal waves that was going to envelop Z-City. Matched Maruov in a casual fight) to Island level (Was overwhelming Adam with his attacks. Took out a Dragon class monster that tried to interfere with his clash with Adam. In a combination attack with Sasaki and Sasamura they were able to hurt a gigantic Overlord Class monster) | At least Country level (Could take down Berserk Youmu if not for her recovery), likely Small Continent level or higher (Took out several High Dragon classes by himself while injured. Actually broke through Low Overlord Class Mistress Glacier's ice. Should be comparable to Raven Branwen)

Speed: At least Massively Hypersonic (Able to keep up with Maruov. Can easily outpace Demon Class and Dragon Class monsters) to Subrelativistic (One of the fastest of Vale. Should be comparable to Lightspeed Nyan kitty/Neon Katt. Can move several times faster than multiple men who became monsters whom can move at hypersonic speeds. Tengus are notable for being incredibly fast) | At least Subrelativistic (Should be superior to his previous form. Managed to completely outpace ∫©ƒ†˙˙∂∂˙®, whom was able to react to point blank laser attacks)

Durability: At least City level to Island level (Took on an attack from the Shifter Alien, which casually took out an A-class that was supposed to be an S Class hero. Relatively unfazed by an attack from a gigantic Dragon class. Could keep up well against Maruov) | At least Country level, likely Small Continent level or higher (Survived an attack from Low Overlord Class Mistress Glacier. Stated by the Trillion Oni that she would have a hard time-fighting Qrow. Can take hits from Raven)

Stamina: Decently high. Not as good as he was in the past.

Standard Equipment: His scythe that can shift into a sword and a howitzer-like cannon.

Intelligence: Quite intelligent. Can easily see through plans by enemies.

Weaknesses: Starting to reach his prime.

Key: Base form | Pushing through his prime