FC/OC VS Battles Wiki
Register
Don't have an account?
Sign In
Advertisement
in: Characters, Pokémon, Pokémon Glitches,
and 35 more 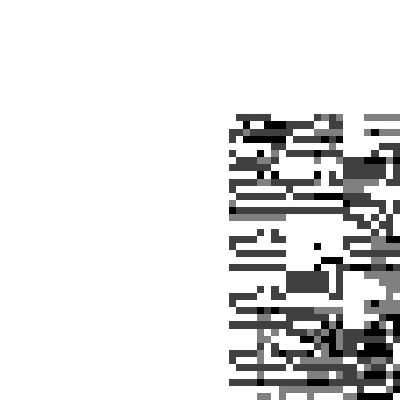 Tier: Possibly 5-B. Likely 2-C through crash. Unknown, up to Low 1-C through Super Glitch

Powers and Abilities: Superhuman Physical Characteristics, Reality Warping (Passively causes reality around it to warp in various ways. This can include data being corrupted, objects being duplicated or beings getting scrambled and destroyed from its very presence. Super Glitch can overwrite part of reality, replacing it with Glitch City-like features and creating more Glitch Pokémon), Information Manipulation (Can permanently alter certain pieces of information through Super Glitch. Passively turns all values to 9 in certain circumstances), limited Nonexistent Physiology (Type 1, possibly 2.

exists as the absence of data for a nonexistent pokémon species. All of its characteristics except for its name are derived from this void attempting to use incompatible data around it to fill it. While this data is materialized in a physical form and can be attacked by anyone, M

's true self remains unreachable, due to lacking one in the first place. Its true level of nonexistence is not clear, but as it does not exist in the very data of the game itself, it should be beyond the game's narrative idea of not existing), limited Abstract Existence (Type 1. It is large than data about its existence would allow, meaning part of its body exists purely as information, overwriting parts of the data that rules over reality), Void Manipulation (Can cause the game to crash, as well as remove parts of reality through Super Glitch), Large Size (Type 0, Type 1 for its full self), Invisibility (Can become invisible with a certain move), Absorption (Can absorb enemy life), Martial Arts, Electricity Manipulation, Power Nullification (Can temporarily nullify the move of an enemy), Ice Manipulation, Fire Manipulation, Status Effect Inducement, Statistics Reduction, Forcefield Creation, Healing (Can heal itself), Energy Projection, Mind Manipulation (Can confuse the enemy), Sound Manipulation, potentially: Air Manipulation, Earth Manipulation, Telekinesis, Afterimage Creation, Explosion Manipulation, Self-Destruction, Water Manipulation

Attack Potency: Possibly Planet level (Has stats far higher than any legendaries, minimally making it higher than the local Mewtwo). Likely Low Multiverse level through crash (Can cause the game to crash, which destroys the current iteration of reality. This crash should be similar in scope to crashes in future games, which can destroy multiple universes). Unknown, up to Low Complex Multiverse level through Super Glitch (Super Glitch can deal immense damage to reality, replacing fundamental parts of the data of the game and causing entire areas to be glitched out. At its worst, it can corrupt the save data of the game itself, which exists on a higher time scale than even time-affecting events such as Arceus re-creating space-time and can hold multiple universes)

Weaknesses: Lacks control over most of its glitch abilities, weak to Fighting, Water, Grass, and Ice-type attacks

-Can crash the game, effectively destroying the game world

-Can permanently corrupt the save file of the game