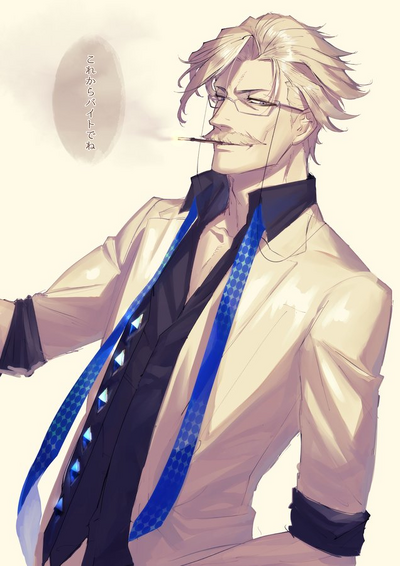 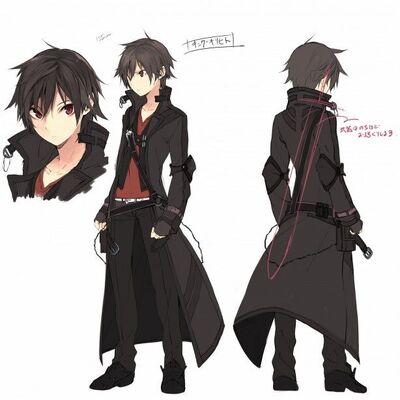 (Note: I own none of this art, all rights go to their respective owners)

Nathaniel Owens is one of the many Mages in hiding, breaking the rules to sire a champion. That champion being named Alder Lancaster, who he trained personally in the ways of magic when the boy was young. He sits in a shack that is far out of any kingdom's reach like a hermit. Due to breaking the rules that the Mages set in place, he now simply uses his first name. Apparently, it has something to do with symbols. He once had an affair with a princess and the two managed to get married before the relationship became rocky and the two broke off.

Now in his current days, he wears a white suit jacket, a black dress shirt, and an untied blue tie hanging around his neck. Due to damage done to his eyes in earlier days, he wears glasses and can not commonly see without those. He sports black dress pants and brown dress shoes. The symbol of a chest is on his left hand. The left side of his shirt is dotted with various colored stones.

In his prime, he wore a black overcoat with a black strap being slung from his right shoulder to his left hip, leading down to his hip that hung slightly down at the right side. He commonly wear black fingerless gloves that covered the symbol on his hands. Wearing a light red shirt underneath the overcoat, and black pants on his legs with black dress shoes. There was originally a sheathe on his back that he discarded later.

Currently, Nathaniel is a generally nice man that wants the best for Alder. At times however, he can be very controlling towards Alder to try and mold him into his true Champion. Often telling the boy to forget about love and his own ambitions and continue to study under his guise.

Back in his younger days, Nathaniel was quite the cold person, as he never often spared an opponent he fought. Using his unique magical power, he was able to defeat entire armies and collapse fortresses without trouble.

Likes: Using his Runic Crest at times, popcorn, being blindfolded

Dislikes: Chicken, things he does not understand, Titus Stalwart

Superhuman Physical Characteristics, Magic, Elemental Manipulation (Via elemental stones), Absorption (Elemental Stones absorb the magicules in the air to produce an elemental attack), Healing (Via Health potions which grant temporary Low-Mid Regeneration), Pocket Reality Manipulation, Sealing, Space Manipulation (Nathaniel's Runic Crest allows him to be able to create tears in space to store within his personal pocket dimension, through this he is able to repair the tears in space to either forcibly teleport others or unleash the amount of space he has stored within.), Gravity Manipulation, Explosion Manipulation (Unleashing so much space within a singular point allows him to be able to create gravitational rift that explode when made in contact with by magicules.), Extrasensory Perception (Is capable of perceiving invisible entities such as ghosts), Non-Physical Interaction (Through magic he is able to attack intangible beings), Resistance to Gravity Manipulation, Explosion Manipulation, Space Manipulation (Has stood within his own attacks before)

All abilities enhanced plus Weapon Mastery (Was in the top ten for the most skilled swordsman within multiple kingdoms), Immortality Negation (Type 2: His swords were enchanted to be able to kill beings that would be able to survive grievous wounds without having the need to regenerate.), Thread Manipulation (His swords shot out threads that were able to attach themselves to things, whether it be walls or living beings), eventual Durability Negation (If his swords clashed with the same metal multiple times over, it would eventually 'learn' to be able to slash through it. However, if they strike with another metal it would 'forget' how to cut through it), Curse Manipulation (Could inflict others with multiple curses such as bad luck, death, or pain though it would begin to corrupt his own mind)

Speed: Relativistic (Although much slower than Titus, he was still able to keep up with him in combat) | At least Relativistic+ (Much stronger than his current self, Titus said that he would be able to outspeed him in combat)

Stamina: High (Is able to fight for days without much rest)

Range: Standard Melee Range, Hundreds of Kilometers with Spatial Tears (His spatial tears are capable of affecting entire islands even if in small amounts)

Intelligence: Gifted (Was able to understand the process of magic and Runic Crests, figured out Alder's abilities within minutes of just seeing it in action)

Weaknesses: Curses begin to corrupt his mind to the point where he would be no different than an animal. If the spatial tears are not repaired, they slowly begin to affect the one who created them, breaking bits off of their body. One can fracture and crack the pocket dimension if they are ever sucked in without much effort and break out easily. Repairing the spatial tears can only teleport the opponent a few feet. Spatial tears require a lot of focus to maintain.

Retrieved from "https://fcoc-vs-battles.fandom.com/wiki/Nathaniel_Owens?oldid=307430"
Community content is available under CC-BY-SA unless otherwise noted.