FC/OC VS Battles Wiki
Register
Don't have an account?
Sign In
Advertisement
in: Characters, Male Characters, Fan Characters,
and 25 more

Michael Prince is one of the Stand users appearing in Paradise City. He is a Canadian college graduate who travels to Woodstock, Illinois to visit the ancestral home of his mother's side of the family. Along the way, he meets up with the other Stand users in the small town, and together they set forth on an adventure to destroy the criminal organization hounding them due to their abilities.

Michael is a foul-mouthed, easily angered and incredibly stubborn loner that, despite not actively seeking out violent solutions to problems, is more than happy to engage in them should the situation call for it. He is easily annoyed by things that he deems ridiculous or illogical, or things that downright make no sense, and usually acts with sarcasm in most of these situations.

Having been part of various gangs in his youth, Michael disdains weakness, specifically targeting cowards and spies. He is also one to bear grudges for a long time against those he thinks have wronged him in any way. Those who he deems just plain idiotic he simply tries to ignore, though he can easily get aggressive if they get in his way.

However, despite his outward thuggish appearance, Michael is a deeply caring person. He will risk his life to protect innocents, and even more so when it comes to his friends. Though it is often difficult, anyone who manages to earn his respect, even those he personally hates as people can and will be able to count on him for almost anything.

Though appearing a bit dull sometimes, Michael is a great outside-the-box thinker, especially in fights. Against powerful and versatile Stands he often uses far more tactics than simply punching them as his demeanor might suggest, utilizing his Stand to it's absolute maximum potential. However, the majority of his strategies are destruction-based simply due to the nature of his Stand. However, his emotions may sometimes cloud his ability to judge and deduce situations properly.

Of his more unhinged traits, Michael can also be incredibly bloodthirsty, but this is almost always due to the influence of his Stand, which he can mostly keep under control. Furthermore, he also has a disproportionate amount of libido, though he can often brush that aside as well when the situation demands it.

Michael is immensely confident in his abilities and those of his Stand, believing strength to be important to preserving his way of life, and although he can accept when he is outmatched, it causes him great annoyance.

Michael is a man of above average height and build. He possesses a considerable amount of muscle mass, though his frame is compact and lean. He has black hair and eyes, with his hair being curly, a slight mustache and stubble running along his chin. His chin is also slightly pronounced.

He usually wears an old black bicker outfit, complete with jeans, t-shirt, undershirt and a jacket that he keeps open or closed depending on the weather, though mostly the later.

Dislikes: Anyone who threatens his friends, cowards, criminals, traitors and snitches

Hobbies: Going to the gym, maintenance on vehicles, reading

Tier: 9-C, 8-C with Shoot to Thrill, higher with Flick of the Switch

Powers and abilities: Peak Human Physical Characteristics, Extrasensory Perception (Capable of seeing Stands, along with other supernatural forces like ghosts and spirits, normally invisible), Aura and Summoning (Of his Stand), Shoot to Thrilll has Superhuman Physical Characteristics, Non-Corporeal (Stands are the incorporeal manifestations of one's vital energy, and can only be harmed by other Stands), Non-Physical Interaction (Stands can interact with ghosts and other Stands), Invisibility (Stands can only be seen by other Stands and Stand Users), Selective Intangibility, Size Manipulation, Elemental Manipulation (Has control of fire, air, water, earth, electricity and even darkness), Existence Erasure (Via Back in Black), Void Manipulation (Back in Black creates an aura of pure darkness that acts as a pure void of oblivion), Enhanced Senses (Shoot to Thrill has senses far more attuned than those of a human, and despite seemingly having no eyes it can see far better and with that far greater detail than one), Durability Negation

Attack Potency: Street level (Cracked a woman's jaw and knocked her out with a single punch, lifted and threw a man several meters away, suplexed a larger man with no difficulty even while being choked by a cloud-like Stand), Building level+ with Shoot to Thrill (Vaporized a cow with a single attack. Collapsed a laundromat. Stronger than the Distance, who managed to cleave an RV in two casually), higher with Flick of the Switch (Completely destroyed a tank), ignores durability with Back in Black

Speed: Athletic Human with Massively FTL reactions (Reacted to numerous Stands with an A rating in speed, therefore making him at least comparable to the likes of Jotaro Kujo), Massively FTL combat and reaction speed with Shoot to Thrill (Should be comparable to Star Platinum)

Lifting Strength: Athletic Human (His best deadlift is 210 kilos), at least Class 50 with Shoot to Thrill (Should be stronger physically than DSMN, who could easily pick up a large tanker truck)

Stamina: Very high. Managed to continue fighting throughout an entire day despite not getting any sleep, being exhausted by using his most powerful attack, then awakening and still managing to use modes and killing a Stand user. Continued to talk normally despite being pummeled so badly he was on the verge of death and had lost all function in his lower body.

Intelligence: Gifted (While not academically brilliant, is a great combat strategist that constantly pushed the boundaries of what he can achieve with his Stand, coming up with creative strategies that very often leave his opponents completely clueless)

Weaknesses: Any damage to Shoot to Thrill is reflected onto him. His rational decision making can be somewhat dulled in situations of extreme high stress. Will try to protect others, potentially to his own detriment. Is incredibly hot-blooded. Modes are limited to a certain number of uses per day. Using Flick of the Switch exhausts him and uses up all of his remaining modes for that element. Using Back in Black knocks him out or weakens him immensely temporarily. 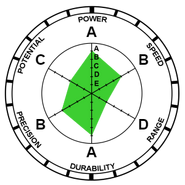 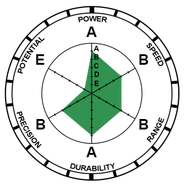