Mia is a character from Kitty Pride. She is a hippie snake that Gatto was friends with when she was younger, although Mia was already an adult at that time. She has an obsession with crushing things.

She's one of the people who were teleported to Cujam by Nermal. She was just past the house of nostalgia and in front of the Flightown cave.

After the end of the game, she can be found and guides the player to the snake country, her power is to change the place where the weight of an object is concentrated.

Powers and Abilities: Superhuman Physical Characteristics, Magic, Body Control (by weight manipulation), limited Density Manipulation (by redirecting weight), Physics Manipulation (on the thing she uses her power on), Damage Boost (by putting all her weight in a single area), Damage Reduction (by putting her opponent's weight in another place than what he attacks with), Durability Negation (by redirecting her opponent weight)

Attack Potency: At least Multi-City Block level+ (Far weaker than herself using weight redirection, can one-shot Nermal post-mai fight who is stronger than when he triggered a mini-nuclear explosion of 12 kilotons of tnt), higher with various crushing techniques, Small Town level with weight redirection (Caused a giant quake, crushed a 20 centimeter diameter ball of Spectro, a material 50'000 times more difficult to crush than diamond, excluding RockLiger and Nermal with Pluto's flesh star, she's only topped by Nessie and the strongest form of Magus and Mai with their speed multiplier at maximum)

Durability: At least Multi-City Block level+, likely higher (Her skin is several centimeters thick, snakes can't hurt each other because of their huge level of durability), at least Small Town level with weight redirection

Intelligence: Likely average (Little is known about her other than her snake philosophy)

Weaknesses: She refuses to cause damage other than by crushing her opponent. She cannot redirect weight on two things at the same time. Never dodge an attack.

Without using her weight redirection power :

With her weight redirection power : 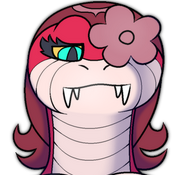