FC/OC VS Battles Wiki
Register
Don't have an account?
Sign In
Advertisement
in: Tier 10, Unknown Tier, Chaotic Good,
and 20 more

Disclaimer: Credit to Raybean and Eclipse who made this table code.Credit to the person who made the music video. Picture is public domain.

Lore Note: He exist both in the separated and main timelines. 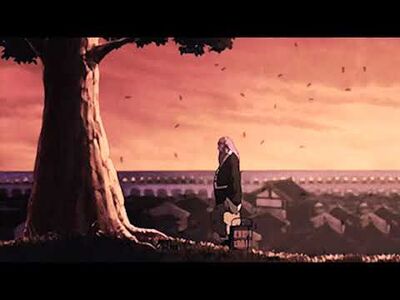 "I made mistake of becoming immortal. Years of traveling around the world gave me realization that death is what makes life beautiful. Even the years of fighting alongside with the madman whom consider himself a benevolent king had drove me to the brink of guilt. A wizard such as my self is powerful, and still my life has no real value for the world around me. I have been living on borrowed time, but there are only a handful of people in this world who truly understand what it means to be an immortal."

Merlin is very old, wise and legendary historic figure whom was told to be the advisor of King Arthur. Once a high ranking advisor of the king, he was responsible for teaching mankind in the usage of magic. He used to travel around the world, going place to place in learning more about the world before his departure.

In his years of servitude towards King Arthur, Merlin was described by his peers as greedy thaumturgist with deep desire of learning everything about magic while being a necessary protector of fighting against daemons and the enemies of Arthur's kingdom. Merlin killed various daemons and monsters that threaten their kingdom with conquest in their pursuit of expanding their kingdom.

Unlike his king who discard monsters as daemons and has no problem murdering them like animals, Merlin began to have guilt after murdering dozens of monsters regardless of race or culture. This guilt grew exponentially after his king murdered helpless monsters and performed gruesome public tortures for show of strength.

This disgusted Merlin after seeing his benevolent king to be nothing more than genocidal madman. Without a word, Merlin left the king and traveled around the world to see more what life has to offer than being ordered around by his king.

Magic, Elemental Manipulation, Danmaku, Creation, Subjective Reality, Attack Reflection, Portal Creation, Reality Warping, Status Effect Inducement, Preparation, Time Manipulation, Dimensional Travel, Probability Manipulation, Holy Manipulation, Passive Forcefield Creation and Vector Manipulation (A legendary thaumturgist whom have studied many subjects related to magic. He is capable of manifesting things and events into the real world through deep meditation and has the ability to project elemental attacks through words alone. With gestures and words; he can curse someone, converting someone into object or animal, restrain their movements, slow their movements and even stopping time. Merlin has automatic invisible shield that manipulates vectors around him to repel physical matter or energy. With a sentence, he can conjure portals in front of him that leads to dimensions and other known places. Fought varies daemons, requiring specific gestures and holy words to kill them. He also can performed rituals that can warp reality.), Light Manipulation, Immortality, Non-Physical Interaction, Astral Projection, Alternate Future Display, Weather Manipulation, Death Manipulation, Healing, Illusion Manipulation, Precognition, Purification, Extrasensory Perception and Invisibility (Type 1, he is immortal due to the elixir he drank. Through deep meditation, he can see alternative futures of choices including see the future in his world. His soul is protected by the effects of his rituals he did long ago, curses won't have any effect and possession results any invading spirits to be forced into leaving the body due to the immense pain they are experiencing. His magic affects spirits and during the years of fighting in his previous life, he has accurate sense of detecting invisible people without needing to see. Through words and gestures, he can manifest floating orbs of light that follows him while capable of producing illusions at the desired target. Moreover, he can also instantly heal people's injuries and kill them within instant through words alone. He can control the weather in his vicinity such as creating large tornadoes, lightning strikes and so on.), Existence Erasure and BFR (Can erase someone from existence and send them through another known dimension like hell with words or gestures alone.), Empathic Manipulation and Blood Manipulation (With words and flick of finger, he can make the target start boiling inside and explode in gory mess. Can manipulate a group or person's emotions through repeating a few words in row.), Sealing, Dimensional Storage and Space-Time Manipulation (Owns a pocket dimension within the astral world, where he stores his stuff there. Through complex rituals, he can replace the intended area/place of his pocket dimension or change how time functions there. Can seal opponents with nearby enchanted item through repetition of words.), Law Manipulation and Life Manipulation (Through ancient complex ritual that would take at least month to complete, gives him a one time wish to change the laws of the universe. In order to do this again, he has to do another ritual again. With a touch of object or deceased person with announcing several words, he can bring them back to life.), Shapeshifting, Energy Projection and Explosion Manipulation (Being born from mortal woman with a father whom is incubus, has the power to shapeshift at will, his most used transformation is turning into owl. Can produce a unknown level of energy through his staff that can cause massive explosions at will.), Psychometry and Paralysis Inducement (If the end point of the staff tapped on intended used sword or something similar, he gains information about it. With the staff, he can whack somebody on the head and make them paralysis or asleep through saying a specific word.), Regeneration and Resurrection (Low-Godly, as the greatest thaumturgist and wizard to ever recorded in human history, has mastered of resurrecting himself from the dead as long the concept or idea of "magic" still exist. Though, he can still has chance to permanently die if he has no willpower left.)

Resistance to Reality Warping, Soul Manipulation, Possession, Dream Manipulation, Corruption, Mind Manipulation and Madness Manipulation (Capable of seeing daemons without going mad and has performed past rituals that prevents invading spirits to fully control him. The rituals he did to himself before, also prevents the evil energies in hell to corrupt him. Dreams daemons once invaded his dreams at one point but he managed to drive them out through sheer will and magic alone. His mind is filled with impenetrable details that is difficult to decipher and control. Unable to be affected by changes of reality such as manipulation of time, transmuting him or making him vanished from existence. His forcefield also protects him from soul-based attacks.)

Attack Potency: Street level, can produce elemental attacks out of thin air such as lightning, fire and so on with varies sizes and how deadly it is depending on his choice. Higher through magic

Range: Standard melee range to hundreds of meters with spells, likely higher due to magic and rituals.

Intelligence: Extraordinary Genius. Very knowledgeable about The Astral World and magic. Fought varies daemons and monsters in the past that varied from abilities. Studied astrology, mathematics, science and alchemy. Knows various human and monster cultures from his travels around the world.

His a very good judge of character, able to correctly deduce their true motives from studying their personality and mannerism. Merlin is also a exceptional strategist, won many wars and conquests during his past by studying the layout of the battlefield, and its environment.

Weaknesses: Normal human weakness. Won't go all out with his powers and doesn't like to kill unless its necessary. Rarely goes into civilizations. Magic requires gestures and words to make the spell work. Magic words that instantly kill someone has no effect against the undead, robots and daemons. Rituals can take days, weeks and even months to be completed. Without able to speak or perform actions with his arms, he would be useless.