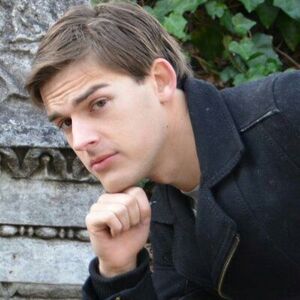 Matthew Patrick, otherwise known by his online title "Matpat", is a theorist youtuber well known for making bold theories or analytical videos about various games, tv shows, movies, foods, restaurants, and even other youtubers. He's the host of four of his own channels, has hosted or participated in various shows or advertisements for other youtubers or companies, and commonly helps youtubers and companies with analytics and social media.

Age: 32 physical, Unknown mentally (Lived through the lifespans of billions of universes)

Regeneration (Low-Godly; Has come back after being erased by the snap as well as having his reality shattered or having his body ground out of existing by scraping against a road), Resurrection (Can resurrect both himself and others through various means), Immortality (Types 1, 2 (Can survive being ripped in half and being decapitated), 3, 4, and possibly 6 (Can repossess his body if it remains intact)), Self-Sustenance (Type 1), Natural Weaponry (Could bite a large chunk from a christmas tree, ornaments and all), Weapon Mastery (Is skilled with various weapons), Fire Manipulation, Electricity Manipulation, Ice Manipulation, Energy Manipulation, Forcefield Creation Chi Manipulation with Kamehameha, Fear Manipulation (Whenever he picks up a shotgun, ducks worldwide tremble in fear), Telepathy (Can hear people's thoughts, send out psychic waves to act as a signal for the X-Theorists, use Jedi Mind Tricks, and talk to objects like Mjolnir), Mind Manipulation (via Jedi Mind Tricks, Can control a target's mind by releasing psychic waves from his hands), Animal Manipulation (Can control fish), Extrasensory Perception (Knows when the audience’ gaze is shifting over to a hentai image left of a page of text, His Theorist Tingle allows him to detect people getting upset with his videos), Telekinesis, Time Stop (Stopped a Bullet Bill and the surrounding environment), Hate Nullification with FlmShd, Can inhale objects like Kirby (Though most objects will get stuck in his throat), Flight (Can fly by waving his arms and legs frantically, Could hover somewhat off a chair, Can perform the Papyrus Air Walk), Teleportation (Has shown many instances of teleportation, which includes entering and traveling through electronic devices, as well as entering playing cards, Dimensional Travel (Travels to and from game and movie dimensions, such is evident when he interacted with Fall Guys and Among Us and when he returned Dream to Manhunt at the end of an episode, which Sapnap and George recognized as a Game Theory episode, Could stretch his neck to the point of entering Hell), Size Manipulation, Transformation (Can transform into various other characters and forms, using the strengths of those forms, like a bee's size and Flight, or the Among Us Imposter's tongue, Elasticity, Duplication, Fusionism, Precognition (Can see all possible future timelines when focused, similarly to MCU Doctor Strange), Reality Warping and Space-Time Manipulation (Can shake reality, Could fold space-time, Can split timelines, Possesses an unknown amount of Chaos Magic), Resistance to Poison Manipulation, Heat Manipulation (Stood in -320 degrees Fahrenheit without clothes on and -452 degrees F with casual clothes on, Was only slightly chilled by breath that could instantly freeze his surroundings), Mind Manipulation (Was unaffected by the Bird Box Monster and can function without a brain), and Radiation Manipulation (Wore a head lamp that emits radiation at 30 Gray without any negative effects, Could eat radioactive chicken, Was unharmed by radioactive dust turning his hair green)

Afterimage Creation (Can spin his arm around in a circle to create afterimages), Statistics Amplification and Statistics Reduction with Weakening Strikes, Life Steal, Energy Manipulation, Mind Manipulation and One Hit Kill|One Hit Kill with Mind Blow

All previous, Levitation and Light Manipulation

Speed: At least Sub-Relativistic (Fatpat ran around a quarter of the Earth in around a second and a half, possibly FTL (Matpat could catch up to Classic Sonic), higher with Speedrunning, FTL as Super Saiyan (Is 50x faster than his Base Form), likely MFTL+ (Has killed the likes of Mario, Bowser, and Kirby on top of many others) | At least Sub-Relativistic, likely MFTL+ | Immeasurable (Those armed with the Infinity Gauntlet are swifter than Abstract entities)

Durability: Universe Level (Survived the births and deaths of billions of universes while counting the possible number of Mario Maker levels), likely Higher, Higher as Super Saiyan (Is 50x stronger than his Base Form) | At least Multiverse level+

Stamina: Nigh-Limitless (Lived through the lifespans of billions of universes while counting possible Mario Maker levels, though he barely moved throughout the process) | Infinite

Range: Ranges from Below Standard Melee Range to Low Multiversal with size manipulation, Tens of meters with projectiles and guns, Multiversal+ with Dimensional Travel | At least Universal+

Intelligence: Genius (Matthew scored a perfect 1600 on the SAT, Counted a number for billions of universal lifespans before inventing a time machine, Matpat the character has plenty of fighting experience) | Should be far higher than before (After a month without Diet Coke, Matpat appears to ascend to some higher state of being) | Nigh-Omniscient (The Infinity Stones were stated to grant the user Omniscience. Thanos claimed to know "all there is to know" because of his possession of the Infinity Gems)

Weaknesses: Has extreme arachnophobia (fear of spiders) and aviophobia (fear of flying on planes), Is allergic to Old Spice, Hates the sound of popping balloons, Becomes incredibly frantic after three days without Diet Coke and incredibly aggressive after a week without Diet Coke, Can be arrogant and egotistical at times (Also gets annoyed when people don't listen to him in debates), Has been roasted and flipped off by various characters, Has been kidnapped or possessed on several occasions, Is constantly bested by Scott Cawthon and Hello Neighbor, Can be easily tricked by editors | Unknown | Needs to be in possession of the Infinity Gauntlet/Gems in order to maintain this power

Key: Base | A Month Without Diet Coke | With the Infinity Gauntlet