FC/OC VS Battles Wiki
Register
Don't have an account?
Sign In
Advertisement
in: Tier 10, Peakbread's Pages, Neutral Good,
and 20 more

Disclaimer: Credit to Raybean and Eclipse who made this table code. Uploaded music file is by Zero Consistency in soundcloud and original singer is by Dulcet Refrain. Character picture is mine, bought it from fiverr while the three pictures under biography are public domain.

Oh hi. I guess you want to visit this OC here... Click to open.
"Don't hurt them." -Most famous quote.

"God give us hope and purpose as every religion before has been given to man, in every age of our history, from the beginning of the world to now. It is how we see and grow as individual beings that determines what our future will be. I believe this because I have seen it with my own eyes. There is a bright and shining new future out there for every person. It may not be the life we envision or even desire for ourselves, but it is an opportunity to study and grow from our mistakes by bringing God into our lives." -Mary's philosophy.

"The rising sun is so pleasing, isn't it? It's almost as if the sun has a voice on its own. It's singing to me, telling me it's time to go. I wish it could sing louder. Gabriel, will they miss me?" -Last words as she sacrifices for the world. 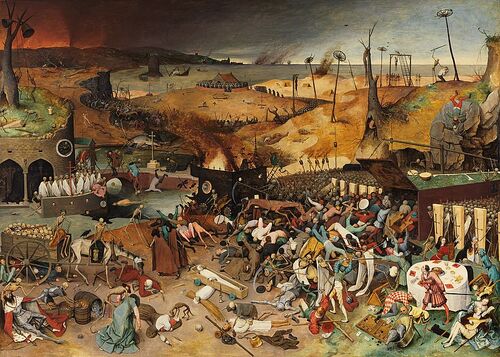 Born somewhere in the 13th century, Mary Dorothea was raised by abusive and fearful parents because of what she is. After birth, she grown many flowers around her with animated eyes and colorful butterflies that dances around her. Because of this, many of her home village including Mary's parents disowns her and outcast as witch or monster.

Even after years of abuse and mistreatment by everyone close to her, she still had deep desire of living the best life she can in this world despite what others say. Unbeknownst to her and everyone else, she is related to her grandfather was the first messiah during the years of Caesar's rule. 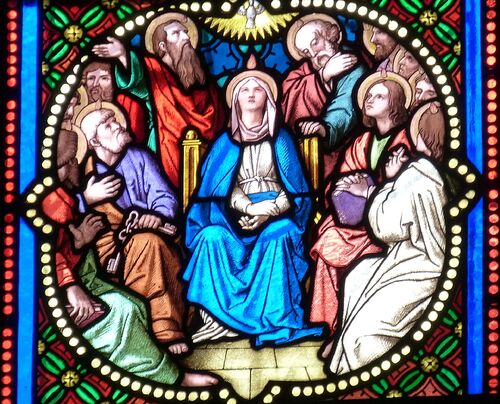 Feared and hated, Mary nonetheless still cared her home village even her abusive parents, not because about herself but her pity because of their perception in what she looks likes. In the end of things, she still loves her parents and will do anything to change their mind about her.

One night, however, she encounters a mysterious entity in her dream that claimed to be the archangel Gabriel and messenger of god. She was chosen to enlighten, help and save the people from the rampaging plague happening across Europe as her reason for Mary's bizarre appearance is God's gift to saving earth.

Rather than rejecting the destiny that was set upon her or feeling anger towards them, she happily accepted it, not choosing another option of reincarnating into better life than she currently has. From there on, she strolled across Europe, enlightening, exorcising and pacifying others while she searches the destined garden for her to end the bubonic plague once and for all. 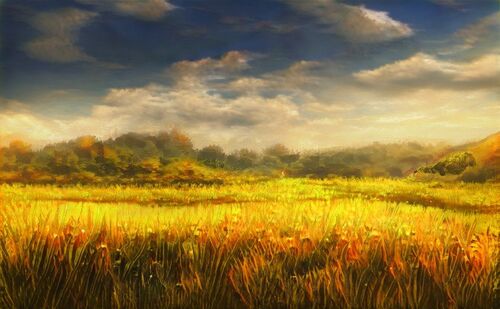 After years and months of searching in her journey, she found the garden that was destined to cure the black plague. When Archangel Gabriel, messenger of God required Mary to sacrifice for stopping the plague or let people perish until they find the cure, Mary immediately accepted it without hesitation. Mary did it out of the love of this world and God. Her journey across the land speak of legends about her as the second messiah, while monster-race of goblins considered her as their patron goddess of nature, forgiveness and caring for the weak.

Her influence stretches across the country as years passed by and eventually, the concepts of peace and pacifism becomes more noticeable. Without her sacrifice, Europe and the world itself will experience a catastrophe of deaths before cure was even made.

Resistance to Morality Manipulation, Madness Manipulation, Mind Manipulation, Disease Manipulation, Poison Manipulation, Pain Manipulation, Soul Manipulation, Existence Erasure, Illusion Creation, Radiation Manipulation, Corruption, Unholy Manipulation and Chaos Manipulation (Couldn't be swayed by charismatic daemons and The Devil himself despite giving her visions of the worst in people. Her mind is shared with different consciousnesses of the flowers on her, working as allies in unison but even then, she has strong willpower of moving forward. She is unaffected by poisonous flowers she encountered and wasn't showing any symptoms of the bubonic plague at all. Furthermore, she didn't went insane after looking a daemon's form. Visited a crashed alien site without suffering any lingering radiation that is coming from the crashed spaceship itself. Suffered an mysterious hallucinogen drink that caused her perception of the world to morph into horrific ways but was still aware of what she is experiencing isn't real. The Devil himself had brought her to the deepest pits of hell just to see her feel the despair of misery and be corrupted by the evil energies of hell itself, but was later surprised to have Mary being unaffected by the presence of the evil energies that was trying to seep her soul as she held her ground of staying true to her beliefs; moreover, hell is described to be chaotic and unholy to mortals that tries to visit the lower/negative realms as it is said to be always changing in chaotic matter while the unholy/evil energies moves into the atmosphere to seep in the mortal's soul to corrupt them further. Managed to spiritual fight back against the devil for trying to forcibly bring out her soul. Several powerful daemons tried to erase her from existence but was unable to due to her existence currently has great importance in the natural function of the universe. Strangely, she is unable to feel pain from physical attacks.)

Speed: Below Average' (Unable to run due to her condition, could only walk in normal space.), Supersonic+ Reactions (The flowers eyes acts as watcher for her surroundings while able to see incoming sniper bullet that was going mach 2.5-5 speeds)

Striking Strength: Below Average Class' (Her punches were felt like being hit by pillow.)

Durability: Below Average' (A single swung of bat on her head will cause it to explode. Her body is incredibly frail to the point that a mere slap on her shoulder could break her arm. Her greatest strength is the mental endurance and supernatural willpower to keep moving forward. Regeneration makes it difficult to kill her.)

Stamina: Below Average' (Despite having the ability of using photosynthesis, she can do 30 minutes of walking before her fatigue takes its toll on her while she's incapable of running due to her condition.)

Range: Standard melee range to likely tens of meters around her presence, planetary when performing self-destruction.

Intelligence: Extraordinary Genius. Accurately visualize her surroundings from sounds or touch and knows every type of flower in the world. Studied varies diseases on how they work by reading medical books related to them. Aware of the false promises and lies presented by manipulative people/daemons. Knows some of the basic teachings of God such as kindness to animals and people including nature itself, the concept of mercy or forgiveness and being good one another while also focusing on teaching others to improve or grow as individual. Moreover, Could accurately navigate in going back by using the rising sun and its position as navigation. Able to answer puzzling questions by daemons and had answered them correctly.

At young age, she shown to be self-taught in studying business, politics, trade and economics from finding lost diaries or books related to these subjects as she mastered them for only in few weeks. She had also learned them from talking with merchants and travelers from her outside village. Knows alot about the Astral World such as hell or heaven, including the false god that calls itself the Yaladabaoth.

Has remarkable talent in correctly answering riddles and trick questions by manipulative daemons or people from just hearing their question once. Had been in few abandon dungeons with complex traps and puzzles through studying the structure by touching the walls and its objects while listening nearby sounds to deduce the type of place she is in.

Apparently understood how an alien spaceship function through analyzing in both the interior and exterior of the craft from listening the sounds it makes, smell of the air and touching the surfaces of it to gain better understanding. Somewhat combat smart despite being pacifist as she had sometimes had an piece of flower from her to hide somewhere like underground in case if her body completely gets destroyed by explosion, allowing her to reform and regenerate from that piece of flower she hid somewhere.

Her greatest trait is her charismatic nature but rather how she persuade others to accept her demands. With her supernatural gifts and great understanding of the human mind, Mary is rather extraordinarily involving psychological manipulation. Had turned dimwitted monsters with high bloodlust towards humans into rational and docile beings by talking them down, convinced satanic cult in giving up what their doing and pacifying crazed tyrant king that was responsible for bringing corruption in his kingdom.

Furthermore, she is unparalleled diplomat and strategist as she had one point been involved into war between two kingdoms. Convinced several civilians and corrupt nobles to slowly changed their policies by persuasion alone. Had convinced both sides by being popular figure from the common folk and performed complex strategies through the help of supporters without anyone getting hurt, resulting the war to end without any bloodshed; saving many lives in the process. Managed to pacified a group of bandits without a single shot of arrow because of her charismatic nature and knowing what to say in convincing them.

Weaknesses: Devoted Pacifist. Physically feeble and weak while never had harm or killed an living soul in her life. Prefers to stand and reason with them while her opponents constantly attack her (though, she would use her vines to shield innocents around her and sometimes uses her vines to also shield herself against elemental projectiles. Moreover, she sometimes uses the sticks to prevent others and herself of getting harm or killed as she continuously reason with them.) Vulnerable to fire and other extreme temperatures. Needs water to survive. She is unable to see, relying mostly on sounds and touch to navigate in her surroundings. Lack any true fighting skills. Self-Destruction is one of the ways that can truly kill her. Her aura has no effect towards powerful daemons such as The Devil himself. Resurrection won't work against bodies that have missing organ or is literal skeleton. Attacks that can only harm the soul or mind is capable of giving her pain.