Mai is the son of Borealis and Magus. He is a main character in Kitty Pride.

Mai is a very smart blue ram rabbit. He can accelerate up to 128 times.

Powers and Abilities: Accelerated Development (by increasing his stats with Drake's material), Damage Boost (with Relate), Damage Transferal (with Tension), Elasticity (Is able to survive being crushed completely due to his rabbit physiology), Healing (with Guitar), Information Analysis (Was able to analyze and understand the planet he was on in a few days), Magic, Paralysis Inducement (With Inflakick), Reactive Power Level (With Acceleration), Statistics Amplification (in many many ways, such as Focusing, Tension, Acceleration among others), Statistics Reduction (Of his opponents, with Guitar), Superhuman Physical Characteristics

Intelligence: Gifted (Learns easily. Knows how to study a planet's setting. Has read all of RockLiger's books on how magic works)

His power is to accelerate without suffering the negative effects. He can accelerate 8 times before Magus' death, and 1024 times after.

He attacks with kicks. 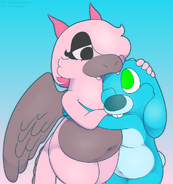