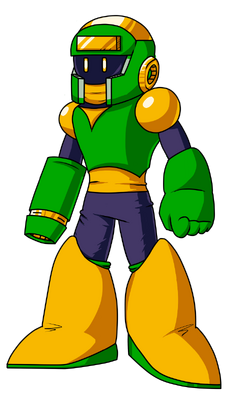 Maestro is the main character from Mega Man 8 Bit Deathmatch by Cutstuff. This silent robot is of currently unknown origin. In the game, they were the winner of the Robot Master tournament and has been saving the world with Mega Man ever since.

In V6, it's implied that Maestro's past has something to do with Ra Moon, as the trophy you get for defeating them is titled "Origins", and Ra Moon considered Maestro defeating it to be a "Success".

At an unknown point in the future, a statue of them was made in the Robot Museum by Mr. X, which survived to Mega Man X's era.

Gender: None (Is a robot). Referred as Male, Female, or neither depending on player choice.

Age: Unknown, possibly ancient (Their creator is unknown, as is their date of being built. However, it's implied they were created by Ra Moon)

Powers and Abilities: Superhuman Physical Characteristics, Gravity Manipulation, Ice Manipulation, Fire Manipulation, Water Manipulation, Earth Manipulation, Strength Augmentation, Transmutation, Weather Manipulation, Flight, Magnetism Manipulation, Forcefield Creation, Space-Time Manipulation, Fusionism (Can merge with Mega Man's mechanical dog Rush in a variety of ways, as well as Bass' Treble), Creation (Can recreate virtually any materials required for the usage of their Variable Weapons System), Immunity to Soul Manipulation and Mind Manipulation (As a Robot, they lack the soul of an organic being, and can't be manipulated through typical mind manipulation techniques), Meteor Summoning, Can breathe underwater, Invisibility via Centaur Flash, gains Flight with Duo Fist, possible Time Paradox Immunity (When Quint killed their past self, they seemed unaffected (Though this may be because they were in a separate plane of existence)), Inorganic Physiology (Type 2), Self-Sustenance (Types 1 and 2. Likely 3), Purification (Type 2, due to having some of Duo's energy, Maestro is able to cure robots of Roboenza), Resistance to Hacking (Doctor Wily would only be able to hack into Maestro's systems if they willingly turned off their security hardware), Corruption (Type 3. Due to possessing some of Duo's power, they are immune to the Roboenza)

Attack Potency: At least Multi-City Block level, possibly Small Town level (Fought Gamma, who easily destroyed Mr.X's fortress almost instantly. Said fortress has multiple skyscrapers. Gamma's footsteps alone seemingly created earthquakes of at least magnitude 5, which is at this level), City level with Duo's power (Was able to defeat the Evil Robot, who Duo said was a threat to the universe, and after being repaired by Doctor Light Duo himself said he was too weak to defeat said robot. Able to defeat Robot Masters infected with Roboenza, which greatly increases their power. Using Duo's power alone, he did this). Possibly Far Higher (Can damage Terra, who seemingly survived the Wily Star destroying a planetoid of unknown size)

Speed: At least FTL+ (Able to fight on par with Sunstar even without Duo's power, who did this while heavily damaged), likely Massively FTL with Duo's power (Can keep up with Duo and the Evil Robot, who travel throughout the universe)

Lifting Strength: Unknown normally, at least Class G with Duo's power (Did this)

Striking Strength: At least Multi-City Block level, possibly Small Town level (Can damage foes comparable to itself with various weapons. Even without any weapons, was able to physically damage Roll while corrupted), City level with Duo's power (Duo Fist should be comparable to the Evil Robot, used Duo's power to hit the Wily Star at this level), possibly Far Higher

Stamina: Limitless via being a robot.

Range: Standard Melee range, extended melee range with some weapons, hundreds of meters with most weapons

Standard Equipment: All of these weapons and items

Intelligence: Unknown, rarely speaks or shows any signs of actual intelligence, though is seemingly quite skilled in combat.

Weaknesses: Maestro has run into Wily's traps almost every time he makes them, and his weapons have limited ammo.

Note: Due to the rules of Canon to Fanon scaling, Maestro cannot scale to the canon Mega Man characters.