FC/OC VS Battles Wiki
Register
Don't have an account?
Sign In
Advertisement
in: Incomplete Profiles, Ovenverse, Characters,
and 24 more 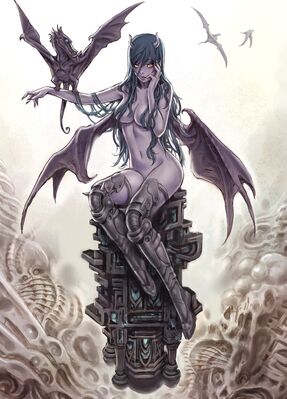 A character made by Sir Ovens. Part of the extended universe within the Ovenverse

Luxzes is the Eternal of Lust, Passion and Debauchery.

Age: Ageless, can take the form of any age

Attack Potency: At least Multi-Solar System level (Avatars of Luxzes are among the most powerful of the Sirens. Even high ranking Sirens such as Suris fear their power.) | Hyperverse level (Exists in Eternal Space, which was stated to contain 'countless dimensions' stacking atop each other. In her battle with Elphetite, they destroyed an 'endless array of dimensional clusters' which was described as merely a fraction of Eternal Space.)

Speed: Massively FTL+ (Should be comparable to high ranking Sirens, all of whom can fight Zaniel and Hunter evenly) | Immeasurable

Intelligence: Varies | Extremely high. Luxzes knows everything that happens in Regular Space where ever lust, passion, or extacy is involved.

Weaknesses: Luxzes becomes almost powerless facing anyone who is able to resist or is immune to mortal desire.

Luxzus' Avatars are just names of pop-stars spelt backwards. Go ahead, try it. 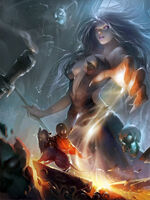