FC/OC VS Battles Wiki
Register
Don't have an account?
Sign In
Advertisement
in: Characters, Genderless Characters, Good Characters,
and 60 more 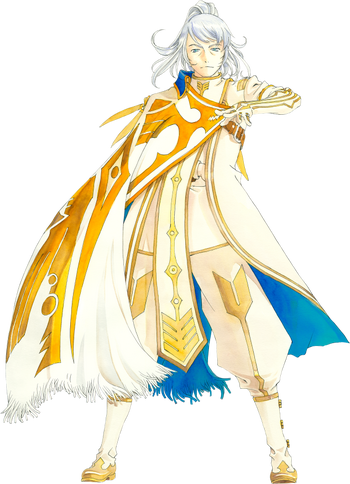 Luminaris is a character from the 5th timeline of Everybody Wants to Rule the World, summoned into the white room along with others. A kind, if somewhat unusual being, Luminaris seeks to help protect the humanity of this world, whether it be from demons or their own foolishness.

Dislikes: Demons, war, people who hurt the innocent or go against the greater good

Weaknesses: Sunshine weakens at night and after high noon.

Goddess: Luminaris possesses the physiology of a Goddess Clan member

Sunshine: Luminaris possesses the Grace known as Sunshine. It allows him to become stronger with the rise of the sun to the point where he can become nigh-invincible, but will weaken as the sun sets.

Ark: The holy magic of the Goddess Clan that generates light particles for use in a variety of spells. It can disintegrate the darkness of the Demon Clan, although sufficiently powerful demons can handle Ark attacks like any other. A common use of Ark involves creating spheres of light around the user's target, inflicting damage on whatever is inside.

Persona Summoning: The ability to utilize Personas, powerful manifestations of the mind and soul. Personas can move and attack independently of their users, allowing for double-teaming between their user and the equipped Persona. Each Persona has a set of elemental affinities, which also apply to their user while the Persona is equipped.

Uriel: The Persona possessed by Luminaris and a Persona of the Aeon Arcana.

Sword of Paracelsus: Magic Sword of the Element User: A Mystic Code in the form of a sword composed of ultra-high density Elixir. It is mainly used to enhance, assist and amplify the power of magecraft, allowing for instant use of ritualistic magic. By using the five elements as a catalyst, it is able to simulate a false version of True Ether, a force from the Age of Gods, to destroy anything around it. However, the blade's true power lies in its nature as a "quantum computer" that analyzes and steals magical properties of the opponent.

Unlimited Blade Works: Infinite Creation of Swords: Unlimited Blade Works automatically records every weapon that Luminaris sees, analyzing their structures and storing them within his internal world. Luminaris can then, whenever he pleases, project them onto the world. Within Unlimited Blade Works, this is virtually effortless and instant, and he can even use them in a manner of Gilgamesh's Gate of Babylon, allowing him to bombard his enemies with swords shot out as arrows from a distance and all directions. However, the weapons he produces are ranked down. He can also project defensive constructions such as shields, but the mana cost for these is two to three times much higher than if he were to project swords alone.

Using reinforcement, he can create modified versions of the weapons he projects, giving them new abilities such as creating spatial distortions or homing on his opponents seen through his versions of Caladbolg and Hrunting. By charging up his Noble Phantasms with mana, Luminaris can fire them as a Broken Phantasm, which provides a great increase to their power and Mystery, at the cost of destroying it on impact.

Item Construction: A skill which measures one's ability to manufacture magical items. Luminaris boasts an unmatched EX-Rank in this skill, allowing him to create a crystal called the Philosopher's Stone, artificial spirits called Elementals who correspond to the five elements (Fire, earth, water, wind, and void/ether), homunculi (Artificial humans endowed with the ability to think), among many others. Additionally, by using a leyline connected to his territory, he is able to mass produce jewels for Jewel Magecraft.

Territory Creation: A skill which quantifies one's ability to create a territory advantageous to them as a Magus. At A-Rank, Luminaris is able to create a "Temple", which is superior to the Workshop of a lower Magus.

Elemental: The ability to create and make use of spirits who correspond to the five elements. By using a high-density crystal as a base, each of the Elementals have properties related to their element (Fire Elementals are made of concentrated flames and can emit high temperatures, Earth Elementals have extremely high mass and are as durable as adamantite/diamonds, etc). Notably, Void/Ether Elementals are difficult to create due to being made of something different than Ether Clumps.

High-Speed Incantation: A skill allowing Luminaris to speak magic incantations at an accelerated speed. At an incredibly high A-Rank, Luminaris' use of this skill is comparable to Medea's High-Speed Divine Words, allowing him to cast High-Thaumaturgy in the time it would take to enact a single-action spell. This turns normally lengthy incantations into simply uttering "O' [Element]". Additionally, he is able to use this skill to make his Jewel Magecraft more efficient.

Philosopher's Stone: A skill that allows Luminaris to purify and accumulate magical energy into a crystal known as the Philosopher's Stone. While the effects greatly vary depending on the skill's rank, Luminaris' A-Rank allows him to even bestow pseudo-immortality on any target of his choosing.