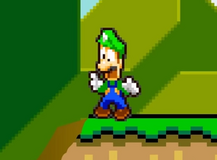 Luigi is one of the main protagonists of the Flash movie series Super Mario Bros Z, created by Mark Haynes (aka most known as Alvin-Earthworm).

Luigi is the younger brother and sidekick of the hero of the Mushroom Kingdom, Mario. At the beginning of the series of the Mushroom Kingdom and, on the 2006 timeline, he was racing on a Grand Prix with Luigi against the Wario Bros, when Bowser attacked them, in the 2015 timeline, there was a fighting tournament with th last round being Mario vs. Wario, Bowser still interrupted similarly.. After a long battle, Bowser took a Metal Mushroom and gained the uphand. When he was about to kill Mario, the capsule that contained Sonic and Shadow saved him.

Powers and Abilities: Superhuman Physical Characteristics, Energy Manipulation (Can charge his physical attacks with energy boosting their power), Skilled Fighter, Minor Electricity Manipulation, Transformation and Statistics Amplification with Power-Ups (Power-Ups greatly boost his physical stats), Shapeshifting, Flight, and Resistance to Petrification with Tanooki Suit (Tanooki Luigi can turn into a stone statue and an 8 ton weight, and was able to turn back to normal after being petrified by Basilisx), Healing and Purification (Type 1) with Life Mushroom (A Life Mushroom can heal people who are injured and cure poisons)

Attack Potency: At least Mountain Level (Could harm the Koopa Bros and the Axem Rangers X) | At least Building Level+ (Comparable to Mario)

Durability: At least Mountain Level (Took hits from the Axem Rangers X, and Koopa Bros.), Far Higher with Power-Ups (Luigi with a Blue Shell took no damage from any of Semi-Super Turbo Mecha Sonic’s attacks) | At least Building Level+ (Was undamaged by an explosion that destroyed an arena)

Stamina: High (Can endure massive fights while wounded for a long period of time).

-Hammer: Luigi carries a heavy hammer, almost of his own size, that is strong enough to deliver devastating blows to the enemies that he faces.

-Life Mushroom: A mushroom Luigi uses to bring himself or any other ally to 100% percent health or to bring them back to life, can cure poison

Intelligence: High; He is both a medic and a plumber; Experienced and skilled into fighting, knows how to drive.

Weaknesses:: Cowardice, and would sacrifice his own safety for his brother.

Retrieved from "https://fcoc-vs-battles.fandom.com/wiki/Luigi_(SMBZ)?oldid=268194"
Community content is available under CC-BY-SA unless otherwise noted.