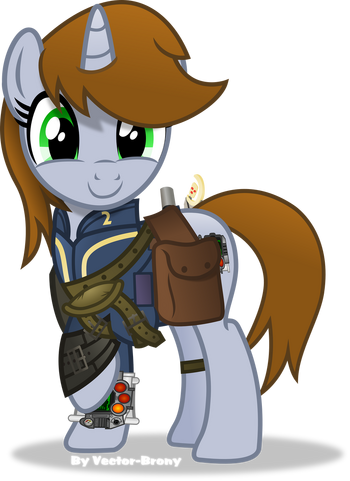 Littlepip is the main character and protagonist of Fallout Equestria. She is a unicorn pony, hailing from Stable 2 of the 100 Stables/Survival shelters of the post apocalyptic wasteland.

Born to the Stables town drunk, Littlepip started out as a lowly Pipbuck technician. Never coming to know her father, and never wanting to be with her often intoxicated mother, Littlepip spent most of her time by her lonesome, repairing and learning all about the little hoofheld devices. After all, it was the job her Pipbuck cutie mark told her she would do for the rest of her life. One day she was approached by Velvet Remedy, lead stable musician and Pip's own personal crush, with an overnight repair request. The next day, Velvet was reported to have left the stable, opening the stable doors for the first time in over 200 years. After being found with Velvet's pipbuck, the stable proceeded to shun Littlepip for her presumed involvement.

Frustrated and upset, Littlepip, distanced herself from the rest of the stable. Littlepip eventually took to looking through Velvets pipbuck, trying to piece together why Velvet would leave. While combing through Velvet's files, she discovers a curious piece of data, a recording of the Stable's unlock code. Seeking to undo the guilt that plagued her, Littlepip resolved to leave the stable, and embark on a rescue mission to bring Velvet back home.

Upon making her way to the stable door, she was however left with an ultimatum. The Overmare, leader of the stable, warned Littlepip that if she left the stable now, she could never, under any circumstances, return home. Though frightened and scared by this proclamation, Littlepip stayed true to her goal. Leaving the comfort of her stable behind her as she arose to the irradiated hellscape above.

Her mission, though starting as a personal rescue, would soon grow to encompass and change the face of the entire equestrian wasteland. Her story became an icon of hope to all who would hear or read the tales of The Stable Dweller.

Very rarely is Littlepip herself fully described in depth in the story other than when necessary. She is a Unicorn Mare, adorned with Stable 2 Barding and a Pipbuck which is the Fallout Equestria version of the Pipboy. Her cutie mark itself a Pipbuck which although obvious given her knack for the device is more often than not used to exemplify her other attributes as a character (Being the Guiding Light for others for example). Other attributes however are left ambiguous. Commonly most authors who incorporate Littlepip into their stories use John Joesco's design. This design sees her in a steel gray coat, brown mane, and green eyes.

Littlepip had a sheltered upbringing in a metaphorical and literal sense. Upon leaving the stable she was prone to judging things in a fashion that would only make sense to her or other stable ponies. Once however outside her morality and sense of just changed as she slowly began to see the world around her rather than the comfort of her own stable. She has a strong sense of right and wrong, being willing to go out of her way just enforce them in the wasteland. This often leads her and her friends into troubling situations. Initially, this is because she believed that her own morality was unquestionable compared to everyday happenings in the wasteland. But she soon herself came to discover that at times her decision making could often lead her down similar routes to the very same folks she fought against as well as unconsciously endangering her friends with her dangerous habits and extreme optimism. Slowly however she matured and through the help of her friends and those around her got back on the right path and became the hero New Equestria needed to jump-start a new age.

Origin: Fallout Equestria by Kkat, a My Little Pony/Fallout Fanfiction

Dislikes: Red Eye, The Goddess, Autumn Leaf, Steel Rangers (They betrayed Steelhooves and attacked Stable Two), Others Suffering, Herself (at times), exceedingly overtly complex riddles, Those who would bully the weak, Ponies who go out of their way to make the wasteland more miserable, Her Title and popularity as "The Stable Dweller" (She feels her accomplishments are over-exaggerated, though through her friends and their occasional teasing, she comes to accept her popularity has had a positive impact on the world.), drugs, being teased about her sex life with Homage.

Martial Status: In a relationship

Status: Alive, Currently in cryostasis as she controls the planets weather. With Celestia acting as her guide.

Would You Do It Again? - The Balefire Symphony (End of Journey theme)

Superhuman Physical Characteristics, Magic, Telekinesis (Type 1), Enhanced Senses (Could hear a hovering robot that was sneaking up on her outside of her Pipbucks map range.), Enhanced Physiology (Drank a brew Xenith crafted capable of increasing bone strength and "reducing damage by 50%".), Flight (Via Telekinesis), Weapon Mastery, Blood Manipulation (Hardened Liquid blood into a spear with her magic, can make casts with blood, and even halt it to a degree.), Minor Transmutation, Hacking (Regularly hacks into terminals, has hacked into and reprogrammed turrets, and land mines, Cracked a 30 character password in a short amount of time.), Preparation (Made a week-long plan that involved her wiping her own memories and trusting her amnesiatic self to kill The Goddess with a nuke.), Social Influencing (Convinced various factions of the wasteland to do tasks for her or follow her example, even enemies.).

Via her Pipbuck: Statistics Amplification, Extrasensory Perception (Can detect threats from Kilometers away, determine their intent, and how strong they are), Homing Attack, Stealth Mastery (Her Stealthbuck add on completely makes her invisible and cancels any noise the user would make to a degree), Perception Manipulation (With SATS she can slow her own perception of time to a standstill), and Information Analysis (Via EFS). With Mane Six Statuettes: Indomitable Will, Supernatural Willpower, Resistance to, Corruption, Mind Manipulation, Possession (Neither Alicorns, The Goddess, nor the Black Book could fully possess her, and its clear these aided in her resistance.), Soul Manipulation (The Black Book, a tome of cursed origins that consumes souls of its users was unable to consume her soul), Dream Manipulation (The Goddess/Black Book attempted to manipulate her dreams and the statuettes helped fight back.), Fear Manipulation, and Empathic Manipulation (The Statuettes push her in making her decisions clear, absolute, and impervious to negative outside influences like drugs or mind control). With Memory Orbs: Memory Manipulation (Lets the user relive a memory), Sleep Manipulation (Knocks it user unconscious for the memories duration.) With EMP Grenades: Electricity Manipulation, Minor Power Nullification (Nullifies Magic Powered Weaponry). With other equipment: Radiation Manipulation (Via Balefire Eggs), Fire Manipulation (Via Zebra Rifle), Plasma Manipulation (Via Plasma weapons), Poison Manipulation (via Poison Dart Gun), Explosion Manipulation (Via Dynamite), Regeneration (Low Low via Healing Potions), Resistance to Radiation (Via Rad Away, when taken lowers the users internal radioactivity).

Superhuman Physical Characteristics, Magic, Immortality (Type 3 and possibly 1, More Alicorn than Unicorn, Alicorns are immune to certain toxins.), Telekinesis (Type 1), Enhanced Senses, Enhanced Physiology, Flight (Via Telekinesis), Weapon Mastery, Blood Manipulation, Minor Transmutation, Hacking, Preparation, Social Influencing, Slight Reactive Evolution, Regeneration (Low-Mid, Regenerated a hind leg over time and a more minor wound almost instantly,  Higher with Sufficient Radiation), Can Absorb Radiation to enhance her abilities. Via her Pipbuck (Has since melded with her leg): Statistics Amplification, Extrasensory Perception (Can detect threats from Kilometers away, determine their intent, and how strong they are), Homing Attack, Stealth Mastery (Her Stealthbuck add on completely makes her invisible and cancels any noise the user would make to a degree), Perception Manipulation (With SATS she can slow her own perception of time to a standstill), and Information Analysis (Via EFS).

Durability: Building Level (Survived being incinerated by Mr Topaz, who is this strong from sheer size. Took recoil damage from the BFEL blowing out a wall she was hiding behind and was somewhat undamaged, albeit knocked out briefly.) | Building Level (Higher than before.)

Stamina: High, Fought for hours despite having a punctured lung, Survived for multiple days with said puncture. Can go days with little sleep, has cleared small settlements on her own with little rest. | Likely Higher

Range: Standard Melee Range Normally, Hundreds of Meters with Magic, and Weaponry (Was able to land headshots with her Sniper Rifle unscoped at this range.)

Intelligence: Highly Gifted, possibly Genius, Master Lock Picker, Hacker, and Battle Tactician. Hacked into a computer with a 30 character encryption easily. Had impressed Steelhooves, one of the oldest and most feared soldiers in the wasteland. Fights opponents usually with far higher AP and numbers and usually comes out on top due to sheer intelligence. Tricked an enemy of hers into handing her a nuke they were using to threaten her. Manipulated several roving gangs throughout the wasteland. Tricked The Goddess (Horrific fusion of Twilight Sparkle and Trixie's mind) and managed a way to get around her ability to read minds, eventually leading to her demise in Chapter 39. | Higher than Before, The Enclave thought her team was so much of a threat that they sent their best assassins after her over dealing with Red Eye. In the stories penultimate battle she lead a small ragtag army to victory against both Red Eye and The Enclave with 10 to 1 numbers against them. Ultimately coming to control and begin healing the immediate wasteland.

Standard Tactics: Littlepip usually will lead with Little Macintosh and SATS while getting some distance. It is rare for her to naturally lead with her stronger weapons on opponents that don't at first intimidate her. If she is given any down time during a prolonged fight she will try to use her Stealthbuck and longer ranged weapons. Will almost never use her hemokinesis/blood manipulation due to its shameful origins. In a bloodlusted state, Littlepip loses nearly all self control. Ignoring rhyme or reason and just hitting her opponent with a combination of her strongest attacks, or instant kill moves, such as essentially force choking her opponents. A good example of how Littlepip fights while bloodlusted state was when she solo exterminated the entire town of Arbu. Wherein lied an entire town dedicated to cannibalism, and cultish activities. She spared no one in her blind rampage, giving little pause for reason or the damage she caused to her own reputation as a hero. Even normally, Littlepip is headstrong and brash when making a move. Often her more short laid plans involve just surprising the enemy with tenacity through underestimating her weak or frail appearance. If given any amount of preparation she will start the fight with her Stealthbuck activated and go for a stealth kill. Her stamina, when one considers her previous shelter life, is absurdly high, as is her will to keep pushing on. Through her statuettes help and encouragement; Littlepip will always have an extremely fortified mental state. One that will rarely falter, even in the most dire or questionable circumstances.

Weaknesses: Shoots first and asks questions later, and can be a bit reckless at times. Pipbuck is vulnerable to EMPs, Too much strain on her magic will break and render her horn inert. SATS needs seconds to recharge between uses. EFS does not inform its users what kind of life it finds and has trouble with elevation. Stealthbuck only lasts an hour and requires an hour of recharge time after each use, Used to be addicted to drugs but eventually went cold turkey. Memory Orbs can only activate upon coming magically in contact with another object making it unusable against beings not powered by magic. | Previous Weaknesses, her exposure to Taint and Radiation has potentially wrecked her body, and it speculated that she has months left to live at best.

Bluefang (Jamaa Adventures) Bluefang's Profile (Post Chapter 39 Littlepip and Base Bluefang were used. Speed was Equalized, and Pip was given no prep time.)

Retrieved from "https://fcoc-vs-battles.fandom.com/wiki/Littlepip?oldid=319742"
Community content is available under CC-BY-SA unless otherwise noted.