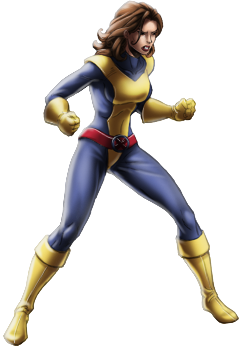 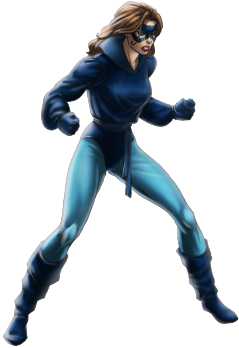 Gifted with the mutant ability to phase the material of her own body and other physical objects, Kitty Pryde can walk through walls or render her enemies' weapons useless. Her alternate names—Ariel, Sprite, Shadowcat—are as mutable as her form. Official Bio

Powers and Abilities: Superhuman Physical Characteristics, Summoning (Lockheed), Fire Manipulation (Lockheed is a dragon that can shoot fireballs), Intangibility (Can only be hit with magic and mind attacks while intangible), Durability Negation (Attacks bypass conventional durability and shields), Statistics Amplification (With Iso-8), Statistics Reduction (Can lower enemy durability), Martial Arts Master (Kitty was possessed by a demon who bestowed an entire lifetimes worth of training to her), Stealth Mastery, Resistance against Power Nullification | Same powers as Classic Kitty Pryde

Stamina: Peak Human. Her stamina likely far exceeds that of any normal on Earth. | Godlike. Likely comparable to Black Widow as the natural effects of Isotope-8 have been exposed to Kitty for so long.

Intelligence: Genius. Teaches classes to younger mutants at Xavier's school. Kitty is well skilled in the areas of applied sciences and computer science. After her possession she also has the knowledge of a lifetimes worth of Japanese martial arts.

Weaknesses: She holds back using her intangibility, never instantly killing opponents, unless they are completely evil and/or lack any form of morality for example, demons and robots.

Note: I will be comparing Kitty Pryde to her 616 counterpart, so I'm giving credit since I will be taking some content from her page from here and here.