FC/OC VS Battles Wiki
Register
Don't have an account?
Sign In
Advertisement
in: Characters, Male Characters, Fan Characters,
and 19 more 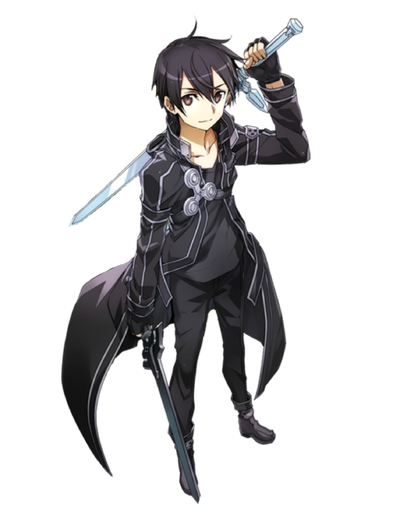 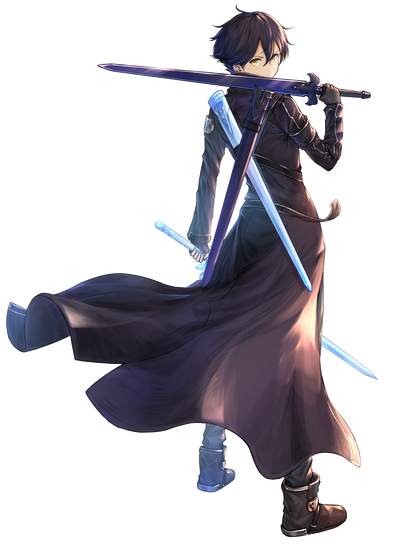 Kirito is an AU character from the Fanfiction A Different Path, made by WhizkidHV.

This Kirito has the same backstory as in canon up until post-Alicization arc, where he gets pulled into the world of Fate/Stay Night as Shirou Emiya's servant in the 5th Holy Grail War. His avatar looked just like his SAO one, but he realized he is stronger, faster, and can access all of his weapons he has used previously in life.

It was a new start. A new adventure.

Power and Abilities: Superhuman Strength, Speed, Durability, Endurance, Stamina, Skilled Swordsman and Dual Swordsman, Unarmed Combat (Should be similar to canon), Statistics Amplification (Sword Skills amplify the user's speed and power, with the downside of leaving some aftercast delay), Precognition, Tracking, Night Vision, Can fight on even with lethal or deadly injuries, Hypersense (Can sense hostile intent), Magic Negation, Distinguish (Eliminating background noise by concentrating on an unnatural or certain sound to detect another person's movement), Can increase the stats of a weapon, Regeneration (Low-Mid via Incarnation. Regenerated his severed arm without him noticing), Servant Physiology, Mental Manipulation Resistance, Minor Resistance to Magic (Including effects such as Petrification, Mind Manipulation, and Spatial Manipulation). Likely has all of his skills/abilities from SAO, ALO, & GGO. Likely has all of his Alicization abilities, which include: Darkness Manipulation (via the Night Sky Sword), Ice Manipulation (Can flash freeze a large area via the Blue Rose Sword. Can also create ice structures in general via Sacred Arts, such as when he created a five-layered ice shield), Life Manipulation (Via the Blue Rose Sword [Continuously and passively saps the health of all those frozen] and Incarnation [Is able to restore something to its previous state]), Light Manipulation (Via the Night Sky Sword [Absorbed a light-based attack from Fanatio]), Plant Manipulation (Via the Night Sky Sword), Transmutation (via the Night Sky Sword. Turned PoH into a tree), Energy Manipulation (Via the Night Sky Sword. Able to absorb "Resources" (energy) within a far-reaching range. This includes stars), Limited Reality Warping (via Incarnation. Allows the user to change the world to an extent via their willpower or imagination. For those who are not conscious or adept with this ability, it is primarily used to increase the chances of winning a fight against stronger opponents or create miracles not possible normally. For Kirito, it allows him to increase the range of his attacks, transform into his SAO Avatar, and create giant black wings to fly. All virtual avatars are capable of Incarnation, however only those who recognize this ability can consciously use it to their advantage), Barrier Creation (via Incarnation. Can create "imagination barriers" from his mind to block attacks, as well as barriers of light), Telekinesis, Non-Physical Interaction (Able to flash-freeze Gabriel Miller, a being made out of amorphous darkness), Weapon Creation/Possible Low-level Matter Creation (Capable of generating metal blades inside of a person's heart)

Attack Potency: Island level (Has a strength stat of B, putting him on the same level as Saber under Shirou in canon and Lancer. Capable of repelling blows and fighting against Berserker), Island level+ with Sword Skills (Broke Gilgamesh's Noble Phantasms from the Gate of Babylon. The ranks of the Noble Phantasms he broke is unknown, but it's implied that Gilgamesh became serious. It is also said that his Sword Skill increased his weapon's "capacity to break blades"), far higher with Dual Blades (Took three lives off of Berserker) and Armament Full Control Art (Destroyed a large group of high ranking Noble Phantasms coming straight at him and broke through Gilgamesh's armor at the same time with Release Recollection), Small Country level with Excaliber (Has the exact same stats as the true Excalibur, with the only difference being that Kirito's is meant for melee instead of outputting energy)

Speed: Massively Hypersonic (Has a speed stat of A, putting him on the likes of Lancer and Rider. Surpassed Lancer in speed in their fight), higher attack speed with Dual Blades (Was fast enough to take three lives off of Berserker)

Durability: Island level (Has B-rank endurance), Small Country level with Excaliber when blocking, higher with Excaliber's Release Recollection (Can defend against weapons comparable to those of the Gate of Babylon at the cost of being "overwhelmed")

Stamina: Tireless for as long as he has prana

Intelligence: Though he is academically average, Kirito has a high combat intelligence and can adapt to battles and situations on the fly, even against enemies who don't have any attack patterns such as other people. He has over 2 years of battle experience fighting for his life against both NPCs and players alike, and is also a masterful swordsman who specializes in one-handed swords, both single and dual wielding. This fighting experience is only sharpened when he learned formal Kendo swordplay from Suguha during Ordinal Scale, and learned actual swordsmanship for over a year in North Centoria Imperial Sword Mastery Academy during his time in the Underworld. His knack for finding patterns and adapting to situations has also led to him to develop multiple Outside System Skills to help in various situations, as well as notice things that most people wouldn't. He has an extremely good memory, as he remembers dozens upon dozens of Sword Skills and how to get into their pre-motions, as well as dozens of Sacred Arts commands and combinations, types of metal, what specific flowers grow in what area, and more. Additionally, Kirito is very knowledgeable with computers and mathematics (e.g. he randomly computes the volume of the food he eats), and is extremely proficient in multitasking, as seen when he can recite the chant of his Armament Full Control Art mid-combat.

Weaknesses: Similar to canon: Normally composed and calculated when fighting, but fights with reckless abandon when he gets emotional, such as when he fought Gilgamesh. Sword Skills have a slight aftercast delay at the end of them in exchange for increased power (Though Skill Connect negates this weakness). Most of the time, to activate Sacred Arts the user must chant out the words required to activate it. If Kirito loses willpower, confidence, or imagination on succeeding in an event, Incarnation will not activate.

Incarnation: A secret skill passed down by Integrity Knights since ancient times, and one of the most important concepts in the Sword Art Online franchise. Incarnation refers to the ability to change the state of the world through pure willpower and imagination. This mainly includes creation, alteration, and destruction. It is the power which Sacred Arts derive from. Its effects are versatile, as the power has been used to wield invisible blades, create swords from the user's blood, transmute objects, increase the chances of an event happening, and much more. However, the power of an Incarnation ability can be matched by another Incarnation ability, and the use of Incarnation is mentally exhausting, requiring a lot of concentration and energy to perform. If the user is in a state where their will is not strong enough, they become unable to use Incarnation. There are a limited amount of people who can use Incarnation to its full potential, and much practice and experience is needed to be able to use it. This ability is most prominent in the Underworld, as this ability is one of that world's core mechanics. However this ability has also been shown multiple times throughout the series before the Alicization arc.

Outside System Skills (OuSS): As its name suggests, are skills that are the users own, unlike Sword Skills and magic that are provided for by a game engine.

Sword Skills (SS): A series of movements that allows the user to attack much faster than they normally could, but the movements required to perform the Sword Skill are fixed and cannot be canceled by the user after they begin performing it. Contrary to their name, Sword Skills do not have to be used with a sword. Also note that these may not be all of Kirito's Sword Skills, but simply most of the ones he has been shown to use.

Original Sword Skills (OSS): Sword Skills made by or is inherited by the user from another. It is done by recording the creator's movements while the skill is being done. It is very difficult as it requires the user to do it perfectly as speeds above how they normally do, at speeds of that of Sword Skills. Cannot be used in Sword Art Online and in Gun Gale Online (The latter can only use imitations).

- Kirito, the Black Swordsman: The title and name given to Kazuto throughout his journeys in those ethereal realms he frequented. This allows him to access any sword he has personally wielded throughout his life, as well as a majority of his skills. However, only two may be equipped at a time. In addition, any object that he uses or identifies as a weapon will automatically be ranked up to at least a D ranked Noble Phantasm.

- Magic Resistance: An innate ability that grants protection against magical effects. Differently from the Resistance effect that merely rejects Magical Energy, this ability cancels the spells altogether. As Kazuto originally comes from a time and place where magic did not exist in certain items, his resistance could be said to be non-existent (E-). However, certain phenomena will not affect him due to his incongruity, primarily and magic dealing with mental manipulation and illusions.

- Riding: The Class Skill of Rider and Saber, is the ability to ride mounts. Rider-class Servants will typically possess a high rank, and A-rank can allow for Phantasmal Beasts and Divine Beasts to be mounted. It is said that dragon type mounts are an exception, requiring a different ability other than Riding. Kazuto has a B rank skill in riding, so he can ride mounts and vehicles with above average skills. However, he cannot ride the likes of Phantasm Races such as Monstrous Beasts.

- Battle Continuation: is the strength of vitality for predicaments. Also, the ability to withdraw from combat and reach allied territory alive after being defeated. Kazuto has A++ Rank Battle Continuation, making it possible for him to fight with deadly injuries and even remain temporarily alive if he takes a fatal wound (ex: getting his heart pierced).

- Eye of the Mind (True): Is a heightened capacity for observation, refined through experience. Kazuto's rank in this skill is B+, vastly improving his chances of winning due to being able to calmly analyze all possibilities and choose the appropriate course of action, even if his chance of winning is less than one percent.

Note: Some of the information here is directly from Kirito's profile page and several Servant profile pages on Vs Battle Wiki. I do not claim credit for this information, and all rights go to their respective owner(s).