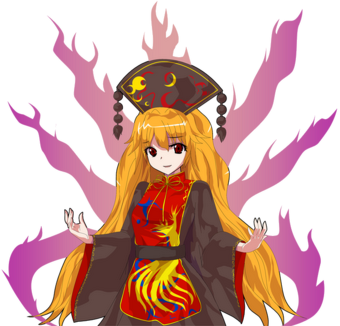 Junko (純狐) is the sworn enemy of the Lunarians, dedicating herself to their destruction following the death of her son at the hands of Chang'e's husband. Ultimately, she used her own power to purify anything to purify herself, turning herself into the embodiment of her own hate, a Divine Spirit formed from her own emotions and willpower.

In the Tournament of Death, Junko was controlled by Towa. Finally she was killed by Goku Black in the end of Part 2.

Superhuman Physical Characteristics, Flight, Danmaku, can purify anything (Her purification works by reducing beings to their states before they had a concept of themselves), Conceptual Manipulation (Type 3; All gods can give "names" to things, giving them a concept of their own, and a defined border. She can also modify her own concept/name) Non-Physical Interaction (Can harm Phantoms and Evil Spirits with her regular attacks), Incorporeality, Abstract Existence (Type 1; The true form of a God exists as an idea, and a god can spread and manifest itself in any number of physical bodies, each with equal power. While Junko is not a god, she is a Divine Spirit), Resistance to Conceptual Manipulation (Gods precede concepts and thus do not need one to exist, and Junko currently lacks a "name" and any concept attached to her) and Mind Manipulation (As showcased by her invasion of the Lunar Capital, Junko is unaffected by the true Moon, which can drive humans insane and kill them if they look at it), Immortality (Type 1)

Range: At least Tens of Meters with Danmaku (Her firing range should be at least comparable to Sakuya's, who can throw knives at least 36 meters), Multiversal for her true form (Gods can access any Otherworld), Multiversal+ with Dark Magic as Villainous Mode

Intelligence: Very High. She can orchestrate effective plots against people on the technological level and power of the Lunarians.

Retrieved from "https://fcoc-vs-battles.fandom.com/wiki/Junko_(Tournament_of_Death)?oldid=318463"
Community content is available under CC-BY-SA unless otherwise noted.