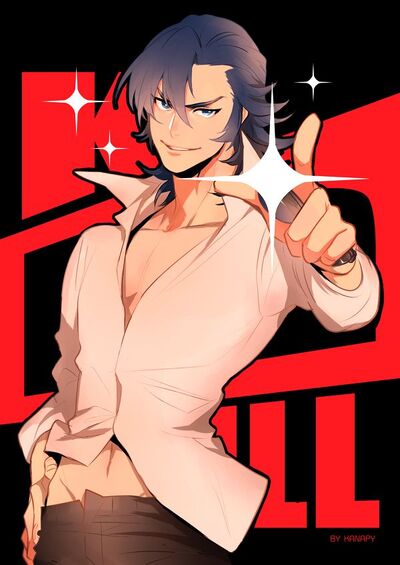 Disclaimer - Bob does not own any of the pictures unless they are hand-drawn. The pictures above is by an unknown artist who deleted their work.

A character made by Cob/Bob

This was an attempt to... literally weaponize Math. He is based off the Bernouli family, known for having many geniuses in their family on various subjects. In fact tune in for more of their family.

As he appears John is quite the character. His body frame is not of a conventional Math Teacher's. Although it's not exactly amazingly buff signs of working out has revealed a well-built body. Dark-blue unkempty hair adds on to the air of his personality and with this unconventional style he had charmed some of his own students and fellow professors. At least, anyone that's not worth their level. He's also quite tall.

John is quite popular for being quite an eccentric professor. He's incredibly lax and easygoing, not caring much for what his student does as long as they meet his expectations regarding assignments and observations. A wildcard and sometimes called crazy by some professors, one cannot deny that he's incredibly narcissistic. He can also be quite blunt in strange situations and can be very expressive with his emotions.

However, even with those in mind he really does care for his students. Though he finds it difficult to be subtle or appears interested to the conflicts and problems of a student, he does what he believes is best to help out both parties.

History A Math Professor who is known to teach at the Academy of Gifted Arts. A known School which has a more advanced style of teaching. By advanced, it combines actual studies with Science.

Attack Potency: Superhuman at base (As a professor, superior to students. A boxer that sent a punching bag flying with a casual punch claimed John was several times stronger than him)

Speed: Transonic at base (Has been known to move faster than most people could conventionally see. Almost seems like he's teleporting to normal people)

Durability: Superhuman (Took on punches from a boxer that can send a punching bag flying)

Range: Melee range. About the size of a large lecture room with his powers.

Intelligence: A mathematical genius. He is capable of coming up with improvisational lessons on the spot alongside coming up with battle plans on the go. His typical hobby is to face someone whose ability he never faced and figure out countermeasures while he fights them.

Weaknesses: Really quite a simple style of fighting. Easily charmed by girls, and tricked by their methods. Though it doesn't really detract from when he gets serious

Visualization - The ability to project physical forms for what he speaks about. In a way it's similar to creating hard light copies. Although the created images and forms aren't exactly the most durable. He explains this ability to be finding the coordinates and statistical values of an object, and creating it temporarily out of pre-existing numbers that exist in space.

Increase/Decrease X by a Factor of n - Increases a certain statistical quantitative trait of an object that John is currently touching. In this method he could make certain objects incredibly powerful or useful. Has the version  Multiply X by a Factor of n which is an enhanced version.

Transformation of Axis - Involves John altering the environment during a fight with another person. Mostly the prerequisite for this ability is for John to draw a line or more in an environment. Although even swinging around his ruler to visualize the line would be enough. These lines can also be prepared beforehand.

Divide the Factor X - Reduces a certain quantitative statistic of a target. Whether it's their health, defense value, speed, or offensive value. The effects are typically temporary however but they can be repeated to reduce a superhuman boxer into a faltering weakling.

Graph the Equation - After witnessing and observing the full body of a person, John could formulate a battle plan for them. If he witnesses all their basic motions he could enhance his perspective and even mimic their technique. Of course, it's not perfect and it doesn't mean he would be able to instantly know how they fight. This is mostly for physical brawls anyway. However adding on a certain Theorem or Style can help alter how he uses this ability.

Derivative and Integrals - There is no need to build up momentum. With this ability, John could immediately move at his fastest speed with no warning. There are no repercussions with this ability if he uses it. Not suffering from a whiplash effect or any sort of perspective vertigo or motion blur. Instead, it's almost as if he's moving like that from the start. This can be applied to nearby targets whether a living creature or not, and John could control whether they suffer from actual negative effects of that or not. The second part of this ability is to completely stop a target's momentum no matter how fast they are. As if they themselves had chosen to stop. However, typically this is combined with John's negative application. Meaning they will suffer the whiplash from instantly stopping like that if he so desired.

Retrieved from "https://fcoc-vs-battles.fandom.com/wiki/John_Louie_Bernard?oldid=245747"
Community content is available under CC-BY-SA unless otherwise noted.